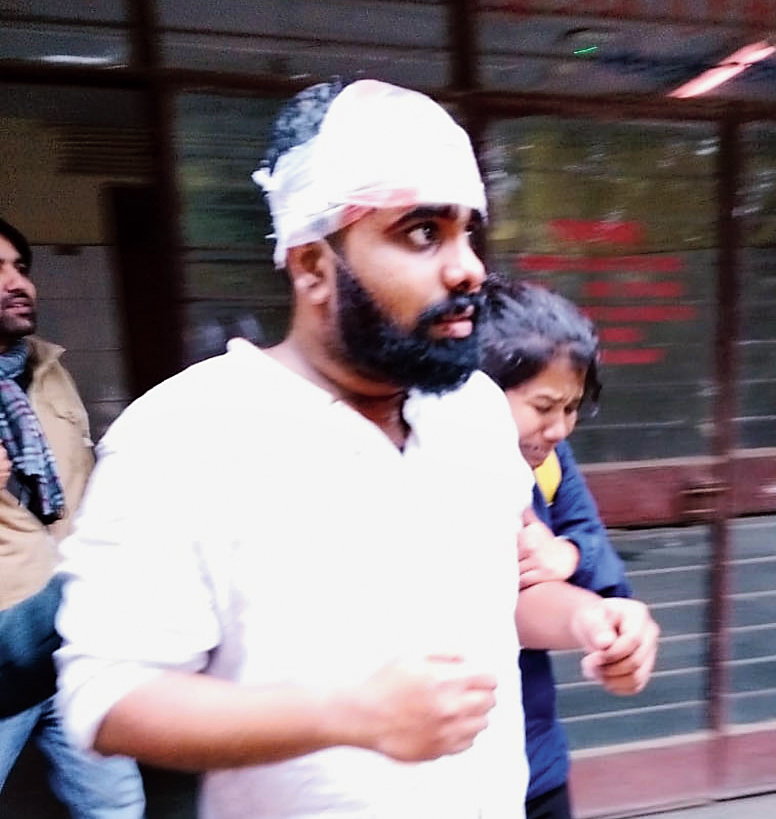 A JNU student, identified as Soori, injured after being hit with a stick by alleged ABVP supporters.
Pictures shared by JNUSU
Our Special Correspondent   |   New Delhi   |   Published 06.01.20, 12:01 AM

JNU authorities on Sunday night blamed the campus violence on the students opposing registrations for the winter semester, accusing them of attacking those keen to register.

However, several teachers have said it was a mob led by ABVP students who had attacked those opposing the registrations in protest against a steep hostel fee hike.

What was left of the JNU Teachers’ Association meeting that was disrupted by the mob. Amit Thorat, a JNU professor, had taken some photographs of the group with lathis. He was made to delete them and was beaten up. He ran for his life, leaving his cycle at the Periyar hostel. After that the mob came running to the JNUTA programme and attacked teachers and students.
Advertisement

The media release by registrar Pramod Kumar also referred to “some masked miscreants” who had “entered the Periyar hostel rooms and attacked the students with sticks and rods”, but did not say who they were.

“Around 4.30pm, a group of students, who are against the registration process, moved aggressively from the front of the admin block and reached the hostels. The administration immediately contacted the police to come quickly and maintain law and order on the campus,” the statement said.