The proposal was passed by the academic council on August 17 without discussion, as has been the trend under current vice-chancellor M. Jagadesh Kumar 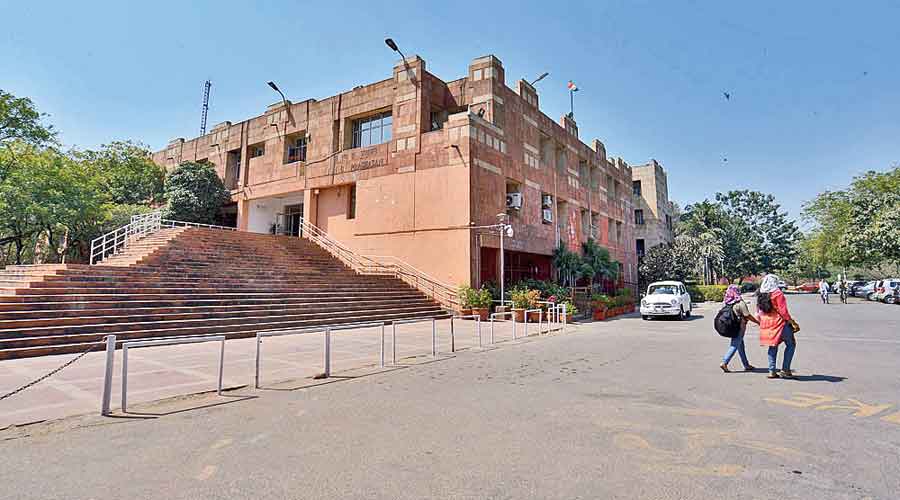 The course content document describes “jihadi terrorism” as the only form of “fundamentalist-religious inspired terrorism” and connects it to “State-sponsored terrorism” exclusively by communist China and the former Soviet Union.
File picture
Pheroze L. Vincent   |   New Delhi   |   Published 31.08.21, 01:32 AM

Jawaharlal Nehru University’s academic council has approved a counter-terrorism course that links Islamist and communist terror while staying silent on terrorism by members of other faiths or groups.

The course content document describes “jihadi terrorism” as the only form of “fundamentalist-religious inspired terrorism” and connects it to “State-sponsored terrorism” exclusively by communist China and the former Soviet Union.

An academic council member said the proposal was passed on August 17 without discussion, as has been the trend under current vice-chancellor M. Jagadesh Kumar. Sources suggested that a final approval from the executive council was a formality.

The optional and inter-disciplinary course, “Counter-terrorism, asymmetric conflicts and strategies for cooperation among major powers”, will be offered to Master of Science dual-degree students who choose to study international relations at the newly minted School of Engineering. It will not be taught at JNU’s School of International Studies (SIS).

Session III of the course content, “Fundamentalist-religious terrorism and its impact”, says an incorrect and “perverse interpretation of the Koran has resulted in the rapid proliferation of a jihadi cultist violence that glorifies death by terror in suicidal and homicidal

“The exploitation of the cyberspace by the radical Islamic religious clerics has resulted in the electronic propagation of jihadi terrorism world over.”

The course content is silent on terrorist violence by adherents of other religions, such as Mahatma Gandhi’s assassin Nathuram Godse or members of the Lord’s Resistance Army in Africa who have been facing off with United Nations and African Union forces.

Arvind Kumar, chairperson of the Centre for Canadian, United States and Latin American Studies who co-designed the course with assistant professor Anshu Joshi of the same centre, told The Telegraph: “It’s based on India’s perspective... how Islamic terrorism has always been detrimental to India’s national security. Jihadi terrorism is a manifestation of Taliban and various terrorist groups perpetrated by Pakistan.”

Kumar’s centre functions under the SIS.

In 2018, the Delhi Minorities Commission had sent a notice to JNU after “Islamic terrorism” was declared an area of study at the Special Centre for National Security Studies. The varsity later dropped the proposal.

“Session IV: State-sponsored terrorism” says: “State-sponsored terrorism has been largely during the ideological war between the West and the Soviet Union and China. The Soviet Union and China have been predominant State sponsors of terrorism and they have been heavily involved in terms of their intelligence agencies training, aiding and providing logistical support to communist ultras and terrorists.

“In the post-Cold War period, the trend has been well adapted by several radical Islamic states that have mirrored the earlier tactical strategies of the communist powers and have continued to aid and arm the various terrorist groups.”

Kumar said in reply to queries: “(That) China has always supported Pakistan’s effort in promoting terrorism is well known at the global level…. The Soviet Union did everything to promote and expand its ideologies across the globe and hence kept its national interest paramount. What it did in West Europe in particular was a beginning and got intensified when they (Russians) intervened in Afghanistan in 1979.”

Ironically, the Soviets spent a decade in Afghanistan fighting Islamist mujahideen backed by Pakistan and the US.

Another elective paper, “Significance of science and technology in international relations”, focuses solely on military technology and is, despite the pandemic, silent on vaccines that have been the lynchpin of India’s foreign relations over the past year.

School of Engineering dean Ruchir Gupta distanced himself from the matter and said it was the SIS that had designed the counter-terrorism course.

“I don’t think anyone objected to the content in the special committee (of the School of Engineering that first vetted the course proposal) and the academic council,” Gupta said.

SIS dean Aswini Mohapatra denied knowledge of the counter-terrorism paper, backed the part on jihadi terrorism but was puzzled at the bit on State terror.

“The course was not designed by me but by the coordinator (Kumar) for such courses from the SIS (for other schools)…. There is no terrorist group from other religions, as such, that have emerged as a global phenomenon. Smaller groups in India may commit violence in the name of Sanatana Dharma but they are not part of a phenomenon of a number of groups across the world,” Mohapatra told this newspaper.

He added: “I don’t know where he (Kumar) got this idea (on the Soviets and China), and how he designed it.”

Moushumi Basu, professor of international studies and president of the JNU teachers association — which has been excluded from the academic council by the vice-chancellor — rued the absence of rigour in the course.

“Even a reading list is not included in the course content that was approved. In the IITs, can you get an MS specialisation with a few badly structured courses?” she said.

“Even the SIS dean is reportedly unaware of the course. That this (course on Islamic terrorism) has been passed again despite the observations of the minorities commission is very disturbing.”

University spokesperson Poonam Kudaisya did not respond to WhatsApp queries from this newspaper.