The Union home minister will address a rally in Rajouri, and another in Baramulla in the next two days 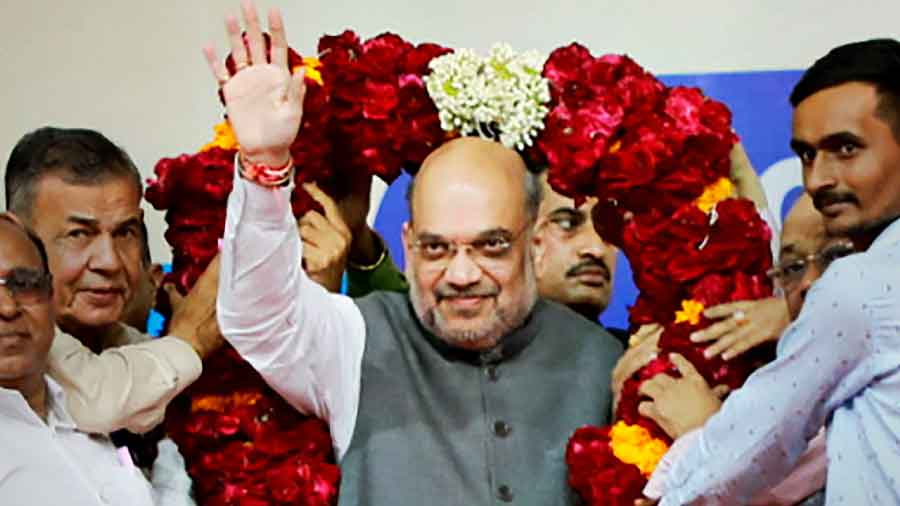 Speculation about Union home minister Amit Shah announcing Scheduled Tribe status for the Paharis during this week’s Jammu and Kashmir visit has intensified the community’s longstanding rivalry with the Gujjars, prompting many to smell a BJP ploy to divide Kashmir’s people.

Leaders of the Paharis, the BJP’s new favourites among Muslims in the Union Territory, and those of the Gujjars, the party’s old favourites who are already STs, have attacked each other in anticipation of Shah’s likely announcement.

The Gujjars, the third-largest ethnic group in Jammu and Kashmir after the Kashmiris and the Dogras, are entirely Muslim while the Paharis are overwhelmingly Muslim but include some Hindus.

The Gujjars are bitterly opposed to ST status for the Paharis, literally “mountain people”, fearing a division of their shares of jobs and Assembly seats.

Gujjars and Paharis each make up less than 10 per cent of Jammu and Kashmir’s population, but together constitute a majority in Jammu’s Muslim-majority Pir Panchal region.

Shah, who arrived in Jammu on Monday evening, will address a rally in Rajouri in Jammu, and another in Baramulla in the Valley, in the next two days. Both areas have significant Pahari presence.

Senior Pahari leaders have been urging their supporters to join the rallies in big numbers, and some of them have arranged buses.

The Gujjars argue that the Paharis are not an ethnic group but a language-based group that includes members of diverse castes, including high-caste Peers, Brahmins and Rajputs.

“The Paharis are an elite group and members of their community have ruled the region (Pir Panchal and adjoining areas) from AD 1200 to 1856. How do they deserve ST status?” Gujjar activist Guftar Choudhary told The Telegraph.

If the Paharis secure ST status, they will be the first linguistic group to do so in the country.

The Gujjars were granted ST status in 1991, when the erstwhile state was under President’s rule following the outbreak of militancy, apparently to wean them away from the gun.

The Paharis have since been fighting for ST status, which has strained their relations with the Gujjars.

The BJP has had modest success in making inroads among Gujjars. Its candidate Andul Ghani Kohli, a Gujjar, became the first Muslim to win the party a seat in Jammu and Kashmir in the 2014 Assembly elections.

Since the scrapping of Jammu and Kashmir’s special status in 2019, the government has posted Gujjars in top administrative posts in the Valley in what the majority Kashmiris see as a “divide and rule” policy.

In May, the delimitation commission announced political reservation for STs, reserving nine of the 90 Assembly seats for them. On Sunday, former chief minister Mehbooba Mufti issued a video statement urging the Paharis and Gujjars to stay united.

“They (the BJP) are making you enemies of each other. First, they pitted Hindus against Muslims. Now, they want the Gujjars and Paharis to fight each other,” she said.

Several senior Pahari leaders, including Mushtaq Bukhari, have deserted their parties to join the BJP over the past few months in the hope of securing ST status for their community.

National Conference leader Kafeel-ur-Rahman, a Pahari, has issued a surprise appeal to his supporters to join Shah’s Baramulla rally and told them that 20 buses have been arranged for their travel to the town.

Former deputy chief minister Muzaffar Baig, also a Pahari, too has urged his community to join the rally in large numbers.

“We are hopeful that Shah Sahab will fulfil this long-pending and just demand of the Pahari community,” he said in a video message.

Choudhary, the Gujjar activist, agreed that the BJP had been disappointed in its efforts to enlist the backing of all Gujjars, prompting the party to look for support elsewhere.

“Top Gujjar leaders, including former ministers, have opposed their (BJP’s) actions after the 2019 decision (to scrap the special status),” he said.

The BJP has, however, not given up on the Gujjars. Last month, the party nominated Ghulam Ali, a Gujjar, to the Rajya Sabha.