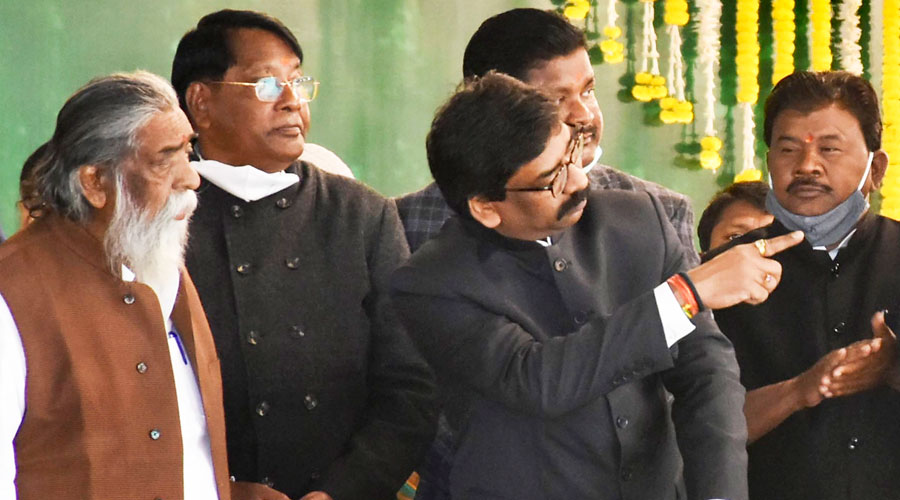 Jharkhand Chief Minister Hemant Soren, with JMM Supremo Shibu Soren and Jharkhand Congress in-charge RPN Singh and other dignitaries during foundation laying stone of various development projects on completion of his one year by their government, in Ranchi on Tuesday, Dec. 29, 2020. (
PTI
Basant Kumar Mohanty   |   New Delhi   |   Published 03.01.21, 02:37 AM

Jharkhand will contribute its own money to buttress its rural job scheme workers’ wages, chief minister Hemant Soren has announced, prompting renewed calls for the Centre to raise the wages under the programme.

Wages under the Mahatma Gandhi National Rural Employment Guarantee Act are fixed separately for every state and paid by the Centre, which has been accused of keeping the wages low.

In half the states including Jharkhand, the MGNREGA wage is lower than the minimum wage fixed by the states themselves. Jharkhand is the fourth state to decide to narrow the gap by paying out of its own pocket.

Soren’s announcement has underlined the Centre’s “lack of political will” to pay even the minimum wage under the job scheme, said social activist Nikhil Dey, who works with the Mazdoor Kisan Shakti Sagathan in Rajasthan.

The daily wage under the job scheme in Jharkhand is Rs 194. This week, Soren announced his government would pay an additional sum to ensure the workers receive Rs 225 a day. This would still be far below Jharkhand’s minimum wage of Rs 294.

Dey urged the Centre to implement the Mahendra Dev committee’s recommendations of 2015 to bring the scheme’s wages — wherever lower — on a par with the states’ minimum wages.

“The Jharkhand chief minister’s announcement is commendable, but the onus of paying wages under the MGNREGA lies with the central government,” he said. “It must enhance the wage in states where it is lower than the minimum wage.”

The Dev committee had also recommended that the rural job scheme wages be indexed with the Consumer Price Index for Rural Labour (CPIRL) instead of the Consumer Price Index for Agricultural Labour (CPIAL), as it is now. The CPIAL emphasises the expenditure on food and clothing over that on transport, health and education but the CPIRL gives equal importance to all the parameters.

When the job guarantee scheme was launched in 2006, the wage rate was linked to the minimum wage in every state. But since 2008, the scheme wage has been indexed to the CPIAL for the respective state, causing it to lag behind the minimum wage rate in some states that revise their wages through consultations with experts.

The finance ministry’s department of expenditure had rejected the Dev committee recommendations, unwilling to shoulder the extra expenditure on wages they entailed.
Siraj Dutta, an activist associated with the NREGA Sangharsh Morcha and the Right To Food Campaign in Jharkhand, lauded the Jharkhand Mukti Morcha chief minister’s gesture but advised caution.

“This announcement is significant. But one should wait till it has been notified,” he said.

“In Jharkhand, the bureaucracy often delays or raises hurdles before the implementation of announcements made by their political bosses.”

Bihar has been paying an additional Rs 8 to its job scheme workers, raising their wage to Rs 202. The state’s minimum wage is around Rs 280. Goa and Karnataka too have made such contributions in the past.

The scheme provides for up to 100 days’ paid work a year for every rural household.