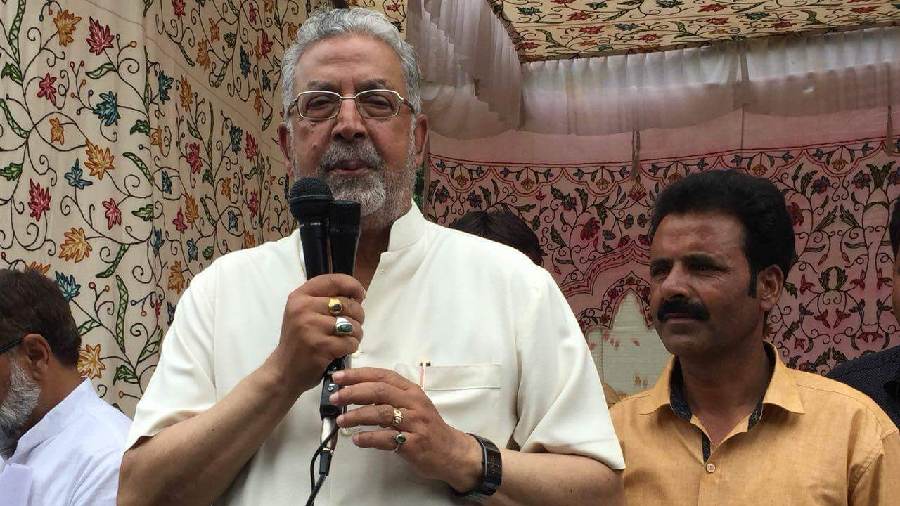 Jammu and Kashmir unit of Congress suffered another jolt on Sunday as its senior leader and former minister Taj Mohiuddin quit from the party and joined Ghulam Nabi Azad led front.

He, however, made it clear that Azad-led grouping will not ally with the BJP, but with National Conference or PDP.

"Today, I wrote to the Congress president and the general secretary and others that I am resigning from all the posts which I was holding, including the primary membership of Congress," Mohiuddin told reporters at a press conference here.

He said that he will join the Azad-led party.

The former minister said the Azad-led party has no ties with the BJP and his relationship with Prime Minister Narendra Modi was personal and not political.

Azad's relationship with Modi doesn't mean those are political ties Some people allege that he has some terms with the BJP. Personal relationship and political relationship is always different. He was parliamentary affairs minister twice and he had a good relation with the opposition then.

"I assure you that we don't have any relation with the BJP and I swear by God. We are secular and can in no way have any ties with a non-secular party, not mine, not Azad's," he said.

Asked if the Azad-led party would ally with the BJP in the assembly elections whenever they are held in J-K, the former MLA from Uri said that if there is a need for an alliance post the elections, they will ally with the NC or the PDP.

"If need be for an alliance, we will do it with the NC or the PDP, but never with the BJP," he said.

"Our manifesto will be to restore the August 4, 2019 position when J-K was a state and had special position under the Article 370 of the constitution," he said.

He said that the cream from the J-K unit of Congress has already gone with Azad and those Congress leaders who had joined other parties, will also join him.

"There is nothing in the Congress party here now. There are now two or three winnable seats for the Congress," he added.

On the criticism of Azad by some Congress leaders, Mohiuddin said that they are saying Congress has given so much to him, but can a man survive for 52 years if he is not talented.