The recent killings of several purported civilians have triggered protests, with families accusing the security forces of murdering their 'innocent' children 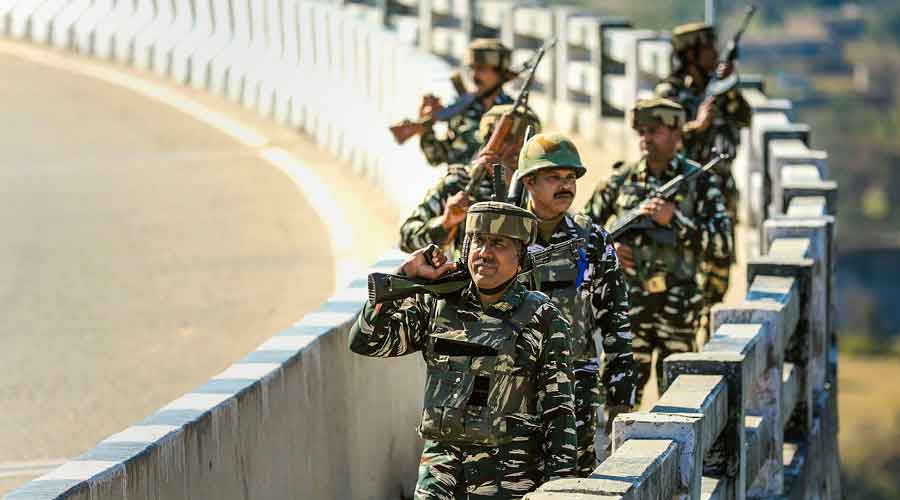 Pulwama resident Mushtaq Wani, whose son Athar Mushtaq, 17, died in an alleged encounter in Srinagar in December 2020 along with two other youths, is impatiently waiting for evidence.
File photo
Muzaffar Raina   |   Srinagar   |   Published 23.01.22, 01:33 AM

Fifteen “hybrid terrorists” or “militants disguised as civilians” were killed last year, Jammu and Kashmir’s top body on security has claimed amid concern in the Valley that the government is peddling a new narrative to deflect criticism over the alleged killing of civilians.

“Hybrid terrorists” — who have no previous record of militancy before they are shot or caught —  entered the security parlance in the Valley after the 2019 scrapping of Jammu and Kashmir’s special status. The term is seen as blurring the lines between militants and civilians.

The recent killings of several purported civilians have triggered protests, with families accusing the security forces of murdering their “innocent” children. The forces have defended their action.

“The core group discussed fresh strategies of the terrorist organisations and their handlers, including the use of hybrid terrorists and targeting of soft targets,” the defence spokesperson, Col Emron Musavi, said in a statement.

“15 terrorists killed in 2021 were fresh names not on the security forces radar.”

The label “hybrid terrorists” had been in use for months but gained greater currency after the recent Hyderpora “gunfight” that killed a “foreign militant” and three others whose families claim they were innocent civilians.

The forces claimed that one of them — Ramban resident Amir Magrey — was a hybrid militant although his father, a known counter insurgent who has spent his life fighting militants and killed one with a stone, has questioned the claim.

The family says it was offered no evidence of the slain member’s involvement in militancy, echoing a charge voiced by several other families that have lost their sons to “encounters”.

Pulwama resident Mushtaq Wani, whose son Athar Mushtaq, 17, died in an alleged encounter in Srinagar in December 2020 along with two other youths, is impatiently waiting for evidence.

“During a news conference (on January 18 last year), the IGP (Vijay Kumar) claimed to have collected 60 per cent evidence of my son’s so called involvement in militancy and promised to offer the rest in the next few days. It has been more than a year, but he has offered no evidence,” Wani, 45, told The Telegraph.

“Instead, seven of us were booked (under the anti-terror law UAPA) for demanding the body of my son. Even our local imam sahab, Gulzar Ahmad, who offered my son’s funeral prayers (in absentia) was arrested and has not been released for more than a year.”

The family claims Athar was killed in a staged gunfight but the police say he was a militant. The police buried him in the Sonamarg area of Ganderbal, around 150km from his home, as part of a strategy to bury “militants” in remote areas to prevent pro-azadi gatherings at their funerals.

The core group listed social media as a key challenge, claiming the “propaganda of the nexus through Internet and social media” was being used to “legitimise killing of Kashmiri civilians by terrorists”.

“The use of social media to spread disinformation is widespread and needs to be countered proactively by a joint effort. Efforts at synergy in exposing fake news, booking of radicals trying to foment unrest and proactive sharing of information by state agencies are being upgraded,” the defence spokesperson said.

At a seminar at the 15 Corps headquarters last month, top security officers had broached a narrative that saw civil society members in the Valley — described as “white-collar terrorists” or militant “over-ground workers” (OGWs) — and not the militants themselves as the biggest hurdle to peace.

The OGWs are known for arranging “logistics” and “movement support mechanism” for militants but it seems the term is being expanded to include many more people in Kashmir, including “prominent civil society members, and their diaspora in particular”.

At Friday’s meeting, DGP Singh and Lt Gen. Pandey appreciated that after the amendment of Article 370, certain targets had been achieved towards the restoration of peace and prosperity in the region.

Pandey urged continued efforts along with civil society to “counter the separatist propaganda and break the cycle of violence for long-term peace in Kashmir.”