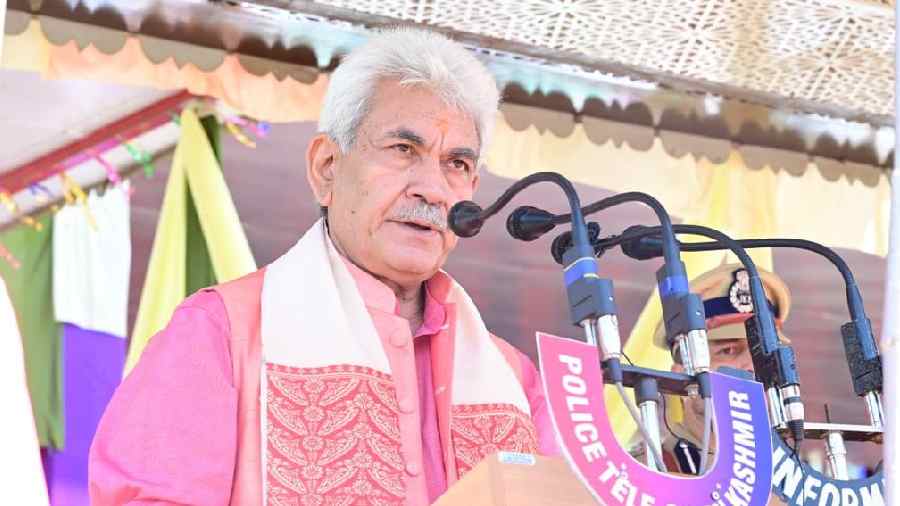 Jammu and Kashmir Lieutenant Governor Manoj Sinha on Friday said some people were trying to disturb the communal harmony by justifying the killings of innocent civilians in the Valley and warned them of strict action as per law.

"We will have to be alert as some elements are trying to disturb communal harmony. We will have to keep an eye on them and deal with them strictly," Sinha said while addressing the Police Commemoration Day function at Zewan on the outskirts of the city.

The Lieutenant Governor said while the Constitution guaranteed freedom of expression for all citizens, some elements were trying to justify the killings of civilians under the garb of this fundamental right.

"Some people, for their vested interests, are trying to justify the innocent killings. Everyone has the fundamental right to freedom of expression, as envisaged by the founders of the Constitution, but if anyone, through words or deeds, will play with the unity and integrity of the country, they will have to face action as per the law of the land in the coming days," he added.

Without naming Pakistan, Sinha said the neighbouring country and its stooges here could not digest the positive developments in Jammu and Kashmir over the past three years.

"Our neighbour cannot digest the developments taking place in Jammu and Kashmir and, through its stooges, is now targeting innocent civilians. There are some elements who are trying to incite people. Anyone who tries to disturb the peace and development of Jammu and Kashmir will have to pay a heavy price for their cowardly acts," the Lieutenant Governor said.

Sinha added that it was due to the efforts of the police and security forces over the past three decades that the country had been successful in combating terrorism and separatism.

"It is because of your courage and bravery that we have been successful in defeating the efforts of the neighbouring country and some elements within the country to spread terrorism and serparatism."

"The sacrifices of the jawans have played a big role in the activities of development that the people of Jammu and Kashmir have witnessed in the past three years. If tourism has increased in any region of the union territory, it is not only because of the efforts of the tourism department. The atmosphere of sense of security has been created by our jawans that people from all over the country and abroad feel safe to visit," he added.

Sinha said India was the "the strongest democratic society" in the world and providing opportunities of development to all citizens was an ongoing endeavour.

"If anyone is trying to sow the seeds of discord among us, it is the responsibility of the society to go for a social boycott of these elements. The way people have protested, and shown their anger, against the recent incidents of civilian killings has given me hope that terrorism has a life of few days left now."

"We should take a pledge to hammer the last nail in the coffin of terrorism and that would be a true tribute to the fallen jawans," he added.

The Lieutenant Governor later laid a floral wreath at the police martyrs' memorial.