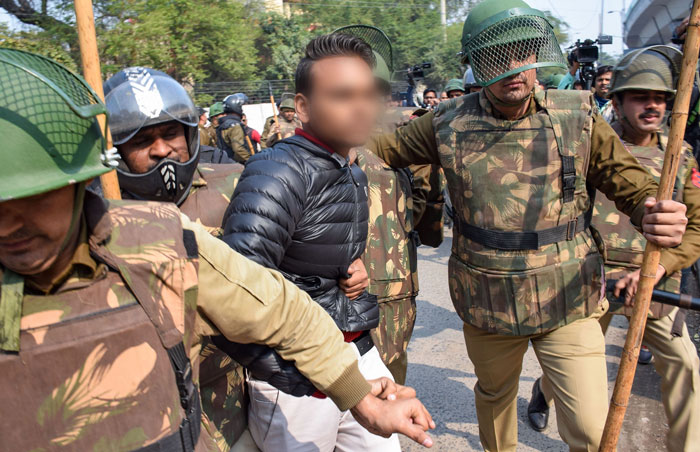 Police detain a person (face blurred by news agency as his being an adult could not be ascertained), after he allegedly brandished a gun and opened fire towards students protesting against the Citizenship Amendment Act, near Jamia Millia Islamia University, in New Delhi.
PTI
The Telegraph And PTI   |   New Delhi   |   Published 31.01.20, 01:09 PM

The youth who shot at a group of anti-CAA protesters near the Jamia Millia University, in which a student was injured, was on Friday sent to a 14-day protective custody by the Juvenile Justice Board, police said.

The accused was presented before the board in the afternoon, deputy commissioner of police (crime) Rajesh Deo said.

The police said they have also urged the board to form a medical panel to conduct a bone ossification test that will verify the age of the youth.

On Thursday, the accused fired a pistol at a group of anti-CAA protesters, injuring Jamia student Shadab Farooq, before walking away while waving the firearm above his head and shouting 'Yeh lo aazadi' amid heavy police presence.

Farooq, MA mass communication student from Jammu and Kashmir, took a pellet in his left forearm while marching with his peers towards the tomb of Mahatma Gandhi, assassinated on the same day in 1948 by Nathuram Godse, an advocate of Hindu nationalism.

Thursday’s shooter identified himself as “Rambhakt Gopal”. Police had initially put his age at 19 but later suggested he could be a juvenile.

Some 300 Jamia students had left the campus to march to Rajghat, over 12km away, to protest against the new citizenship regime and mark the Mahatma’s 72nd death anniversary.

Around 1.40pm, by when they had inched about 100 metres from the campus boundary wall, a man in a black down jacket jumped in front of them and yelled tauntingly: “Aao tumhe azadi deta hoon (Come, let me give you freedom)!”

With the police watching, he whipped out the pistol, waved it and walked backwards facing the marchers, shouting: “Delhi police zindabad! Jamia murdabad!”

He then fired at Farooq, who was asking the gunman to calm down and lower his weapon. Shooter and target were just about a ping-pong table apart, and the pellet hit the arm Farooq had raised to shield himself.

The Crime Branch is probing the case.