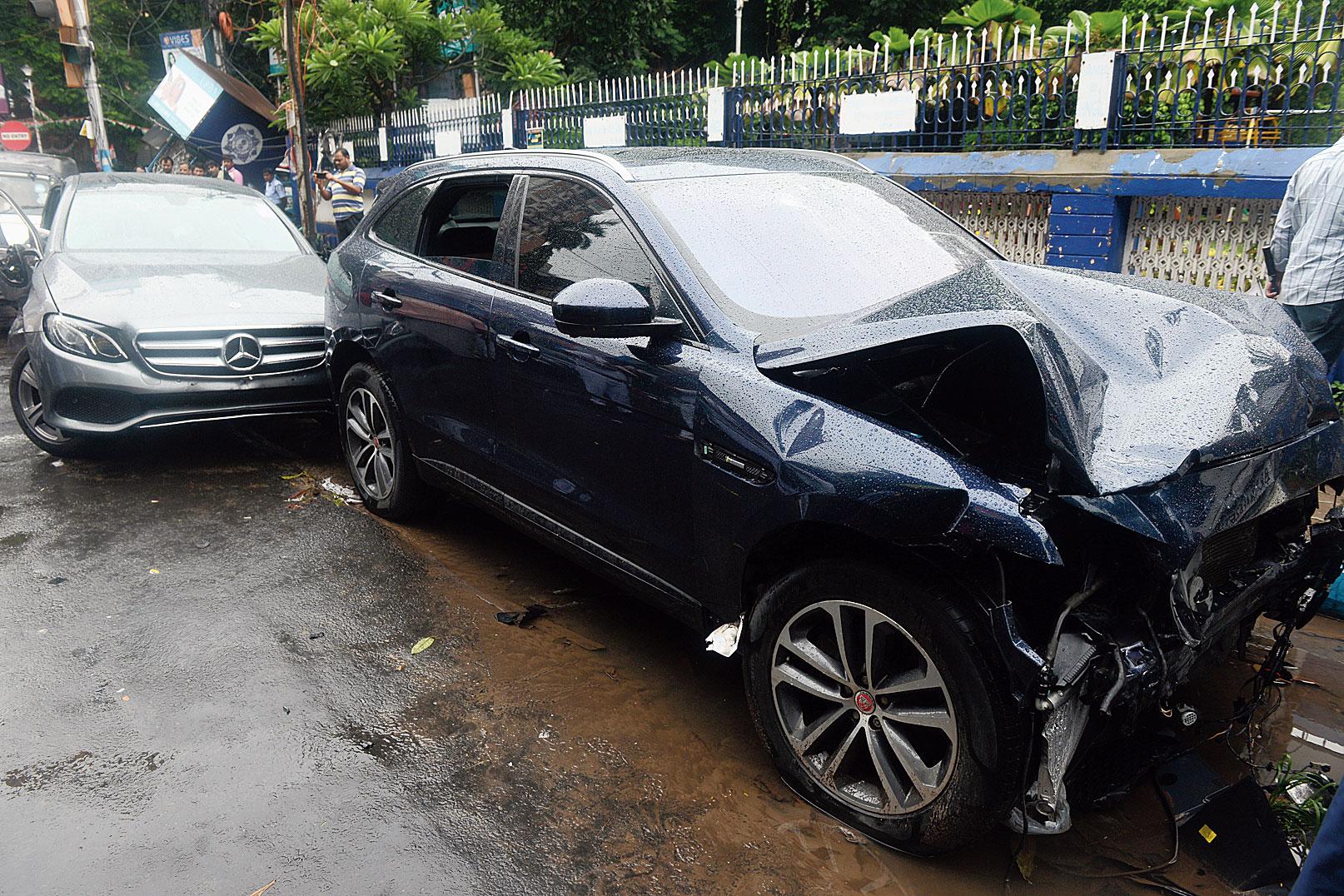 A Jaguar jumped the red light at 1.50am on Saturday in the heart of the city and crashed into a Mercedes, sending it hurtling into two Bangladeshi visitors waiting near a police kiosk and killing them on the spot, police said.

An initial police assessment of the crash at the Loudon Street-Theatre Road intersection has renewed focus on the heavy price pedestrians and other motorists pay when some drivers step on the gas at night to take advantage of the less-crowded roads.

The accident has also affected two well-known business families in the city. The Jaguar was being driven by Arsalan Parwez, the 21-year-old scion of the Arsalan biryani chain.

The injured occupants of the smashed Mercedes are Amit Kajaria and his wife Kanika. The Kajaria family owns the largest private liquid warehousing business in eastern India.

Such was the impact that the concrete kiosk was smashed out of shape.

The police have arrested Arsalan and booked him on several charges, including culpable homicide not amounting to murder.

The dead Bangladeshis — both medical tourists waiting to catch a cab to their hotel — have been identified as Kazi Md Mainul Alam, 36, a manager with a telecom service provider in Bangladesh, and bank executive Farhana Islam Tania.

Kajaria, 50, who was driving the Mercedes with Kanika, 44, by his side, suffered multiple injuries. Both have been admitted to the AMRI Dhakuria hospital.

Arsalan had walked away after the crash, leaving the Rs 70-lakh Jaguar F-PACE at the spot, a few feet from Shakespeare Sarani police station.

The vehicle, registered in the name of M/S RAA Arsalan Enterprise Pvt Limited, led the police to Arsalan — an MBA from Edinburgh — who was arrested from his home later on Saturday morning.

Arsalan’s uncle said his nephew had gone to the office of the deputy commissioner (south) to “surrender” on Saturday once the family realised the scale of the accident.

The police denied the family’s version, saying he was picked up from his home.

If proved, the charges can attract up to 10 years in jail.

Officers at Shakespeare Sarani police station said Arsalan’s Jaguar was coming from Chowringhee and heading towards Park Circus when it jumped the signal and rammed into the Mercedes E-Class 220d that was moving from Loudon Street towards Alipore.

Police sources said that prima facie, it was the Jaguar driver’s fault. “The exact speed of the vehicle will be ascertained during the forensic examination. But preliminary investigation suggests that he was travelling at a very high speed,” said a senior officer of the traffic department.

Both the Jaguar and the Mercedes have been seized by the police and will be subjected to mechanical tests.

Police sources said the Jaguar hit the Mercedes on its right side, leaving Amit with serious injuries to his right ear. Officials at AMRI Dhakuria, where the Kajarias are admitted, said his right ear had almost been severed.

“His right ear underwent plastic surgery. His CT scan report is pending. His wife has received injuries in her stomach but, more than physical injuries, she is in trauma,” a hospital official said.

The family’s Budge Budge facility stores cargo such as petroleum, chemicals and edible oil after they are unloaded from ships.

Kazi Mohammad Shafi Rahamatullah, 36, a cousin of Alam, one of the two Bangladeshis who died, survived the crash.

Rahamatullah said they had come to Calcutta on August 14 for the medical treatment of Alam and Tania and were scheduled to return on Sunday. The three, he added, had had a late dinner and were waiting to catch a cab to return to their hotel.

Late-night road accidents have claimed several lives in the city, including that of model Sonika Singh Chauhan who died when a car, driven by her actor-friend Vikram Chatterjee, crashed in 2017.