Advertisement
Home / India / It's strength of Babasaheb's Constitution that chaiwala is PM: Modi

It's strength of Babasaheb's Constitution that chaiwala is PM: Modi

He said those who are not fighting all 40 Lok Sabha seats in the state, are dreaming to become prime minister 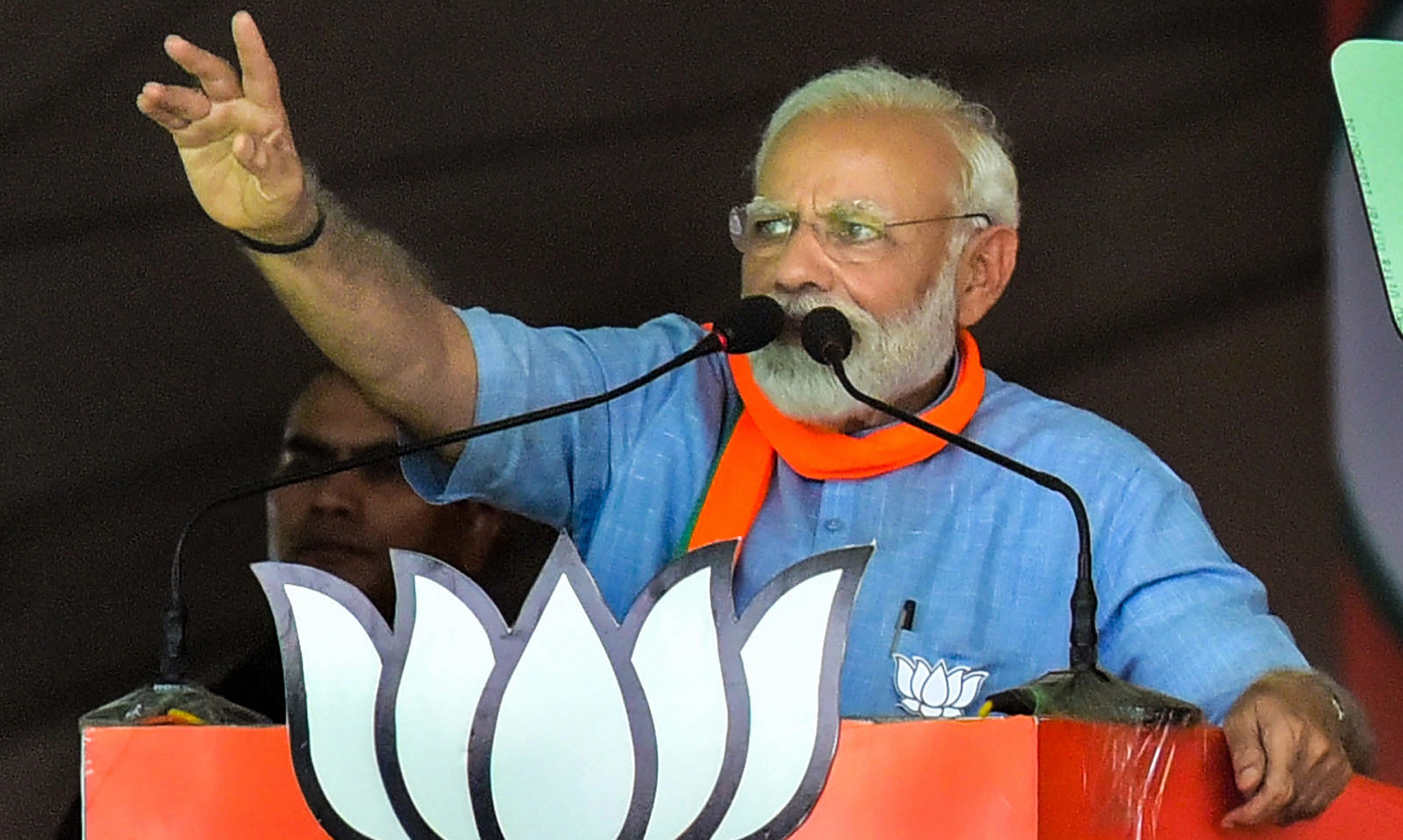 Prime Minister Narendra Modi Sunday hailed the contribution of Bhimrao Ambedkar on his birth anniversary, saying it is the strength of the Constitution given by him that people from humble backgrounds are holding post of president, vice-president and PM.

Modi also attacked the opposition alliance in Uttar Pradesh and said those who are not fighting all 40 Lok Sabha seats in the state, are dreaming to become prime minister.

'It is the strength of Babasaheb's Constitution that a gentleman hailing from deprived and exploited class has become the president (Ram Nath Kovind), while the vice-president ( M Venkaiah Naidu) is from a farmer's family,” he said at a rally here on the 128th birth anniversary of BR Ambedkar, the architect of the Constitution.

'Thanks to Babasaheb's Constitution, a 'chaiwala' (teaseller) is holding the prime minister's post,” Modi said.

In an apparent jibe at the SP-BSP-RLD alliance in Uttar Pradesh, Modi said, '(Parties of) those who are not fighting on 40 Lok Sabha seats, are dreaming to become prime minister.”

There are three Rashtriya Lok Dal (RLD) candidates in the poll fray from the state. The alliance has left two seats of Rae Bareli and Amethi for the Congress.

'With your support, your 'chowkidar (watchman)' has made an effort to follow the path shown by Babasaheb, and ran the government on the mantra of 'sabka saath, sabka vikas' (together with all, development for all),” he said.

Besides, following the path shown by Babasaheb, 'we have also made an effort to honour him in the country's history of which he is a rightful claimant,” Modi said, adding that five places associated with Ambedkar are being developed as 'panchteerth'.

The prime minister, attacking the Congress, said, 'We should not forget what was done to Babasaheb. He was a great economist, policy-maker, writer and a legal luminary.”

'The social circumstances in which Babasaheb attained such great heights, were extraordinary and unprecedented. This is a major reason why the Congress could not tolerate Babasheb,” he said.

In a veiled attack on rival parties that claim to be followers of Ambedkar, Modi said, 'The politics of Uttar Pradesh has seen an era in which he (Ambedkar) had been deceived after initial promises to follow his path.”

'Some people wanted to change politics, but they changed their slogans -- 'sabse pehle parivaar aur baad mein rishteydaar (first the family and then the relatives),” he said

These are the people who in order to fulfil their vested interests have forgotten the trauma which the people in western Uttar Pradesh had to go through, Modi said.

'The entire country had witnessed how people in western UP had to leave their houses and business and go to other places, everyone has seen. When western UP was burning, who was the one who shielded the guilty,” Modi said without naming anybody or any incident.

The prime minister said the people in western parts of the state understand the nuances of their vested interest.

Targeting the SP and the BSP, Modi said they have failed to read the mood of the electorate.

'The SP and BSP do not want to accept the truth...UP's poll results this time will compel them to buy locks from Aligarh,” he said in the city which is famous for its lock industry.

In the last three days 'you must have noticed that how a competition to hurl abuses towards the chowkidar is going on,” Modi said.

'The artists of the 'mahamilawat (adulterated alliance)' have unleashed (themselves) on Modi. After all, what happened in the past 2-3 days? Actually, after the first phase of polling, their survival chances are very slim, and they know this very well. In fact they are now standing at the brink of defeat,” he said.