A comprehensive analysis is being carried out to avert future tragedies, says Rawat 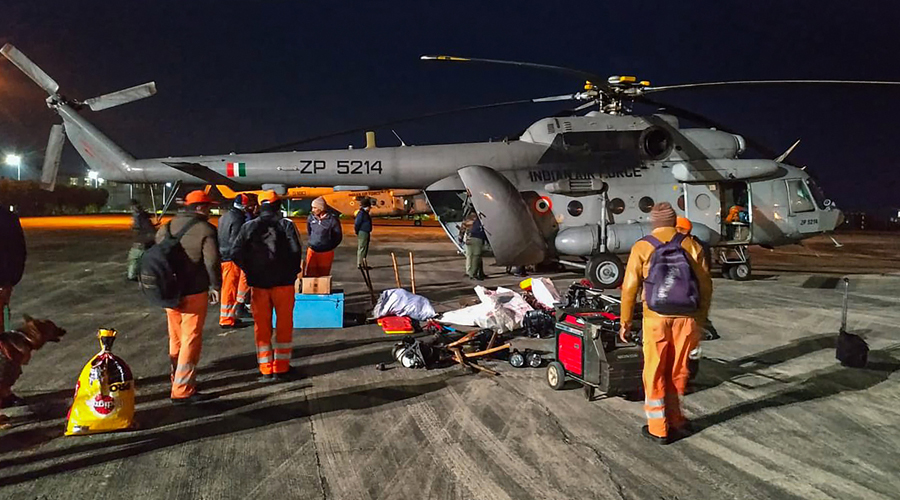 A team of Scientists of DRDO-SASE leaves for Joshimath area for surveillance and reconnaissance, in the wake of a Glacier burst in the upper riches of the Himalayas, in Dehradun on Sunday.
PTI Photo
Our Bureau And Agencies   |   New Delhi, Dehradun   |   Published 08.02.21, 06:48 PM

As multi-agency relief operations continue in Chamoli and adjoining areas of Uttarakhand, Chief Minister Trivendra Singh Rawat Monday said a comprehensive analysis of the entire incident is being carried out to avert future tragedies, and asserted the immediate priority was to provide food and other assistance to the affected people.

In an interview to PTI, he said the incident appeared to have happened due to the breaking of the glacier and the Chief Secretary has been instructed to find out the real reasons.

Preliminary estimates show that around 200 people are still missing, while 11 bodies have been found, he said.

"A DRDO (Defence Research and Development Organisation) team is already studying the cause of this tragedy and we have also sought the help of ISRO (Indian Space Research Organisation) scientists and experts for the same," he said.

After a comprehensive analysis is undertaken to find out the reasons of this incident, "we will build an elaborate plan to avert any potential tragedy going forward", Rawat said.

Asked about the ongoing relief operations, he said they are continuing in full swing.

"We have made all arrangements needed for the rescue and relief operations along with providing healthcare facilities to the affected people. Most importantly, we are working on re-establishing the connectivity to the affected villages," he said.

Rawat said while the extent of economic loss will be ascertained in due course, the topmost priority, for now, is to save as many lives as possible and to rehabilitate those who have got displaced from their homes.

Multiple agencies are coordinating efforts to search for survivors on Monday, a day after a portion of the Nanda Devi glacier possibly burst through its banks at Joshimath, triggering an avalanche and a deluge that rippled through the Alaknanda river system in the upper reaches of the Himalayas.

Rawat said multiple teams have been drawn, both from the Centre and the state's disaster relief agencies, along with the defence forces who have been convened to lead the huge rescue operations.

The state's Director General of Police has been camping in the affected areas since Sunday while the Garhwal Commissioner and the DIG Garhwal have also been instructed to remain there, he said.

"The entire team of the district administration has been engaged in the relief and rescue operations in the area since Sunday. Officers from other districts have also been sent on the spot so that the post-mortem of the dead bodies found can be done on priority," Rawat said.

Asked what could be the economic loss of this tragedy, he said as far as the assessment of economic loss is concerned, it will be available only after the relief work is over.

"The Rishiganga Power Corporation and the NTPC are assessing the damage to their projects. But, right now our topmost priority is to save lives and rehabilitate the affected people," he said.

Immediate financial assistance of Rs 4 lakh each has been sanctioned to the dependents of the dead, he said.

"Army and SDRF personnel, as well as army and state government helicopters, have been convened to provide the necessary medical facilities to the 11 affected villages in the region," Rawat said.

He asserted the entire state machinery is engaged in the relief and help operations.

"I myself have been monitoring the relief operations. There has been full support from the Centre while other states too have extended the support during this tragedy," Rawat said.

He said Prime Minister Narendra Modi has been in constant touch with them since the tragedy struck and has assured the state of all possible help.

"Prime Minister Modi has also announced a financial assistance of Rs 2 lakh each to the dependents of the deceased," Rawat added.

"Home Minister Amit Shah expressed his concerns and assured me of all possible cooperation from the Centre to the state. Acharya Balakrishna, too, has assured his cooperation and is ready to adopt orphans," he said.

On steps being taken to help those displaced due to the disaster, Rawat said many people have been displaced from their homes and their immediate need is food.

"Ration is being provided to them by the state government. Ration kits have been prepared including flour, pulses, rice, tea, edible oil, sugar, spices, soaps etc. The distribution of the same has already started in Chamoli district," he added.

On the cause of the natural disaster, Rawat said, "This incident happened due to the breaking of the glacier. Instructions have been given to the Chief Secretary to find out the real reasons.

"Besides, we are also undertaking a comprehensive analysis to find the reasons for this incident and build a plan to avert any potential tragedy going forward in the future," the chief minister added.