Advertisement
Home / India / Just who are you calling a liar, PM?

Is Modi jumping the NRC ship or buying time? 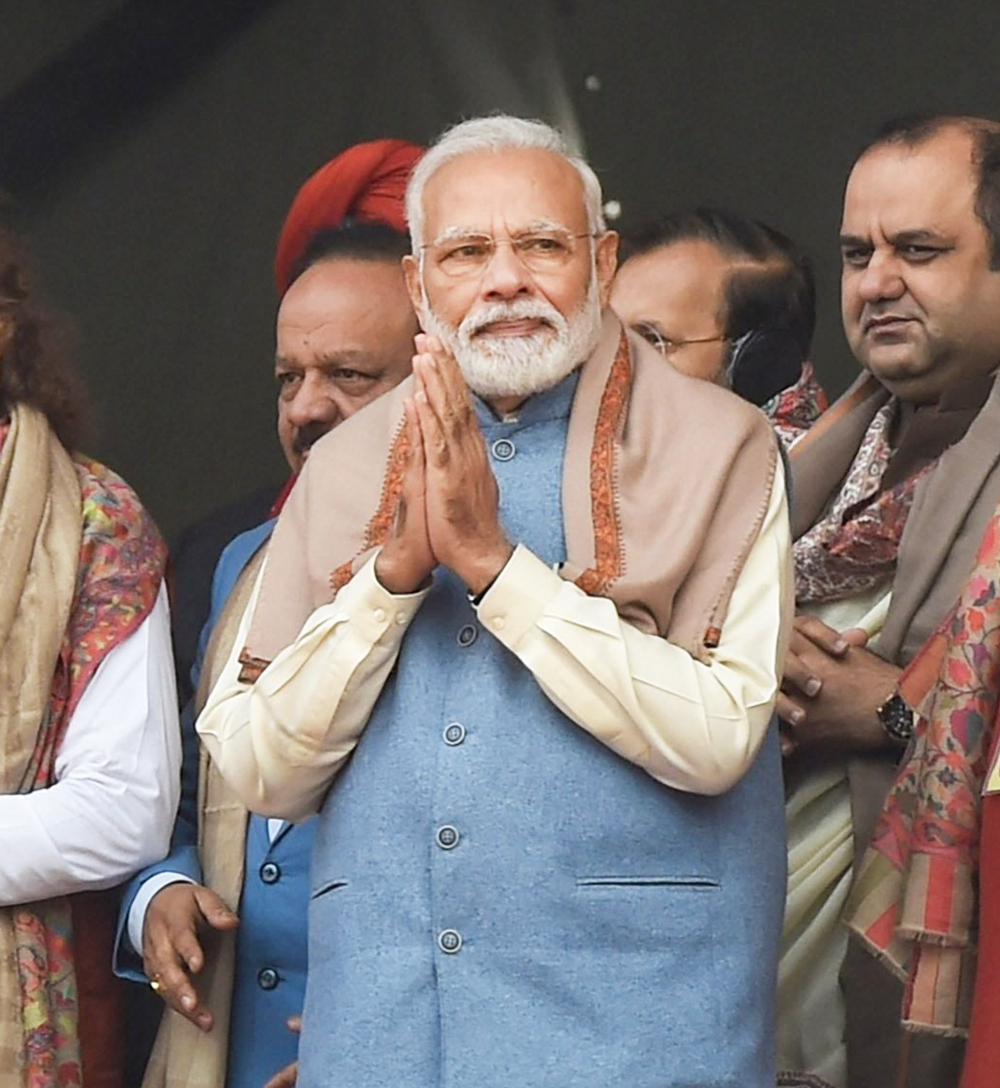 Prime Minister Narendra Modi on Sunday said there had been no discussions on “the word NRC” (National Register of Citizens) during his five-year-old tenure, ignoring home minister Amit Shah’s repeated claims that the citizenship amendment would be followed by a countrywide NRC update to identify and expel “ghuspetiyas (infiltrators)”.

He also denied there were any detention centres in India, unmindful of the construction of several such centres in Assam and the directives from the Centre to many states to open such facilities.

Speaking at a BJP rally on the Ramlila Maidan here, Modi accused the Congress and “urban Naxals” of spreading lies about Muslims being sent to detention centres.

The Opposition Congress interpreted Modi’s speech as a sign of panic reaction.

Thus far, fronted by home minister Shah, the Modi government had taken a determined and obdurate position on dragging the entire nation under the NRC blanket.

But Modi’s Ramlila equivocation on the issue cannot be taken as a clear repudiation of Shah’s stated position, in Parliament and out on the public stage; at no stage did the Prime Minister clearly state his government would not invoke a nationwide NRC.

However, if indeed Modi appeared to take half a step back — blaming the Opposition for fanning propaganda flames on the issue — there could be reasons why he finds himself cornered and constrained.

Several chief ministers and two allies — Nitish Kumar’s JDU and the Shiromani Akali Dal — have openly opposed the NRC; a former ally and Hindutva votary, the ruling Shiv Sena in Maharashtra, has refrained from joining the Modi-Shah bandwagon. Although the NRC will enjoy federal sanction and legally overrule objections from the states, implementing it over the heads of adverse state governments would be troublesome, to say the least.

Besides, the spiralling countrywide protests against the CAA-NRC proposals have taken the ruling dispensation aback. Not merely because they have gone beyond the customary civil society constituency and brought larger sections of society out onto the streets, but also because they show no signs of dying.

Almost everywhere, the protesters have gone out of the way to dismantle social or sectarian barriers and come out to robustly oppose the move under the national flag. It may be a thing of note that all civilian deaths owing to the protests have occurred in the BJP-ruled states of Uttar Pradesh, Assam and Karnakata.

That said, Modi’s could also be buying time — especially in view of the protests and growing international criticism — to keep the market confused. The pattern of speaking in many voices on the issue has been clear for a few days with various ministers in the Modi government and anonymous “sources” putting out different versions of what the NRC is intended for and what it might mean for the citizenry.

The only one with a clear, forthrightly stated position on the matter has been Shah. And according to Shah, the government does intend to conduct a nationwide NRC with an eye on “throwing out every single infiltrator”.

On June 20, making his address to the joint Houses of Parliament, President Ram Nath Kovind had said the government would take up the NRC exercise on a “priority basis” to tackle the problem of illegal infiltrators. So, Modi was clearly economising with the truth when he sought to project the NRC as an illusory subject.

Modi sought to reach out to Muslims on Sunday, saying “Hindustan ke mitti ke Musalman” (Muslims of Indian soil) and those Muslims whose ancestors were “children of Ma Bharati” had nothing to fear from the amended law or the NRC.

Modi said the NRC had been initiated under Congress rule and that neither Parliament nor his cabinet had framed any rules for a countrywide update. “I want to tell the 130 crore Indians that from 2014 till now, nowhere there has been any discussions or talk on the word ‘NRC’. It has been done only in Assam, on a directive from the Supreme Court,” he said.

“Ye jhoot hai, jhoot hai, jhoot hai (This is a lie, lie, lie),” Modi asserted, referring to the Opposition’s charges linked to the NRC. “We didn’t make it. It has not come to Parliament, nor to the cabinet, nor have any rules or regulations been drawn up.”

But Shah has repeatedly suggested a looming nationwide NRC update.

While speaking in the Lok Sabha during the passage of the Citizenship (Amendment) Bill, Shah had said a countrywide NRC would indeed be implemented.

“We will ensure implementation of NRC in the entire country. We will remove every single infiltrator from the country, except Buddha, Hindus and Sikhs,” the BJP’s official Twitter handle had posted in April, attributing the quote to Shah ahead of the general election.

At the Ramlila Maidan rally, meant to launch the party’s campaign for the Delhi polls early next year, Modi devoted more than an hour to the issue of the citizenship law and the NRC.

He began his speech by asking the crowd to join him in chanting the slogan of “unity in diversity, uniqueness of India”. He claimed he didn’t discriminate on the basis of religion and stressed how he was loved in Islamic nations and by Muslims across the globe.

However, he made what seemed an innuendo-laden allusion to Indian Muslims agitating on the streets with the Tricolour, though he didn’t name any community.

“The Tricolour in some hands gives me satisfaction. Now with the Tricolour in their hands they should also raise their voice against terrorism, Pakistan-sponsored terrorism,” the Prime Minister said.

“Shouldn’t they?” he asked the crowd. “Yehi kasauti hai (This is the test),” he added.

Modi used the rally to pay tributes to the policemen who had sacrificed their lives in the line of duty but made no mention of the people killed during the ongoing citizenship protests, mostly in BJP-ruled Uttar Pradesh.

“Martyrs are immortal,” he chanted, urging people to pay their tributes at the newly built police memorial in Delhi.

He also exhorted the crowd to stand up and show respect to Parliament, the “temple of democracy” and its two Houses where the citizenship law had been passed, appearing to imply that the protesters were insulting democracy and Parliament.

Modi used the citizenship protests to target the Congress and portray himself as a victim. He said he fully understood that those fuelling the protests wanted to remove him this way, having failed to defeat him in the polls.

“I have known them for the last 30 years, from ‘maut ka saudagar (merchant of death)’ to now…” he said, referring to a label Sonia Gandhi had given him when he was Gujarat chief minister.

“Hate Modi but don’t hate India. Erect an effigy of Modi and kick it but don’t set fire to public property, poor people’s tempos and houses,” he said.

Modi accused his rivals of trying to defame him and the country internationally. He claimed the Opposition was using India’s Muslims against him as he had succeeded in establishing the best of relations with most Islamic countries.