Intolerance is sweeping, no room for questions, says Amiya Bagchi

Economist, historian and social scientist Amiya Bagchi speaks on Hindutva and its votaries 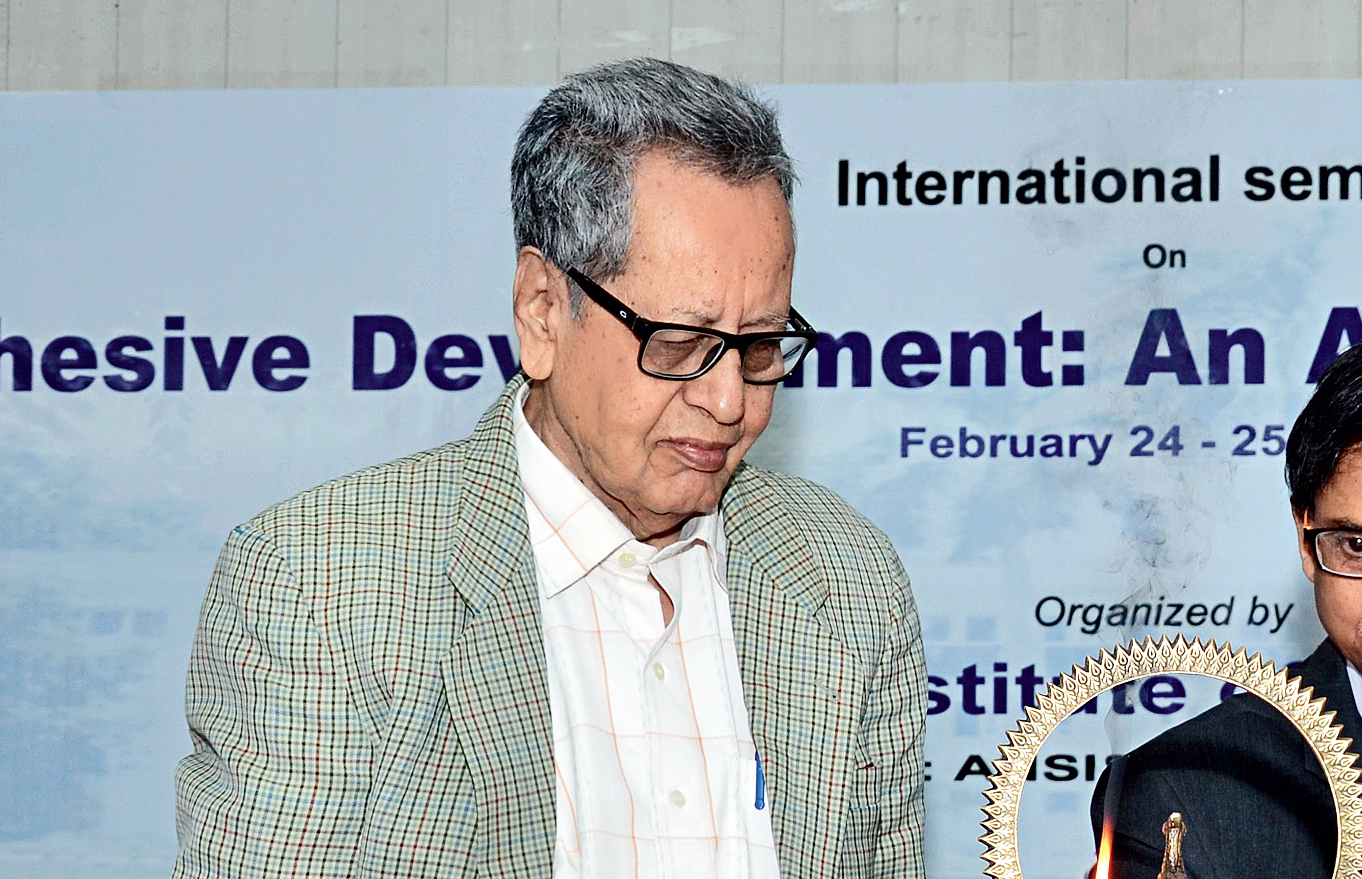 Economist, historian and social scientist Amiya Kumar Bagchi, a former Reserve Bank of India professor at the Centre for Studies in Social Sciences, Calcutta, and founder-director, Institute of Development Studies Kolkata, speaks on Hindutva and its votaries in an interview with Subhoranjan Dasgupta

Subhoranjan Dasgupta: Have you seen and experienced such intolerance, religious and behavioural, in any other phase of our post-colonial history? Powers-that-be are dictating how we should dress and what meat should we consume…

Amiya Kumar Bagchi: No, I have not experienced such intolerance before; it is sweeping, incipient as well as expressive. One could well-nigh contrast this present intolerance with two other grave political aberrations that were inflicted on us in the past — I am referring to the Emergency imposed by Indira Gandhi and the Gujarat carnage when Narendra Modi was the chief minister of the state. While the Emergency was direct, authoritarian and dictatorial to the core, the present practice of intolerance is being conducted by keeping the trappings of democracy intact. Cow vigilantes are arrested as a matter of routine, then dutifully released and even given jobs by the Modi government. Moreover — and this is important — Emergency was not pointed against any particular community. This, in fact, is the crucial difference between Emergency and the prevailing ethos and practice of intolerance.

The Gujarat carnage was steered by visceral religious hatred and blood thirst. This common factor of religion brings the prevailing intolerance and no-holds-barred massacre of Muslims in Gujarat together. Another common factor is the continuity of murderous assaults. For example, killing of Muslims, as in Muzaffarnagar, is not coming to a stop. Only recently, the Hindu perpetrators of this mayhem in Uttar Pradesh were arrested, then released, while some killers and rapists of Gujarat have not even been touched by the law. On the other side, some Muslims have been imprisoned for their role in the Muzaffarnagar riots.

Dasgupta: What specific example would you highlight to underline the raging intolerance — the cow protection movement or, perhaps, the nationwide assault on innocent Kashmiris, which has not subsided fully?

Bagchi: Well, Kashmiris have always been targeted as potential terrorists from the eighties of the last century. Now, after the Pulwama massacre, they are being systematically targeted, especially in those states which are ruled by the BJP. The cow protection movement, on the other hand, has provided a flagrant excuse to beat, terrorise and kill Muslims and Dalits.

In fact, there is a macabre, business angle to this persisting violence. Members of the Bajrang Dal demand the skin of every cow that is killed, and they sell this skin in the market. There is one crucial difference between cow vigilantes’ violent actions and assault on Kashmiris. Whereas the latter seems to be limited in scope and time-bound, the former is an intrinsic part of the Hindutva agenda and it will continue, more because the BJP government is most reluctant to punish the vigilantes.

Dasgupta: This intolerance is not simply action-oriented or action-based. It is fuelled by a distinct ideology and accompanying worldview. What is this ideology ?

Bagchi: The ideology is of course of Hindutva which is a totally historical and a perverted form of Hinduism. Hinduism has always been multi-coloured and multi-dimensional; it was a way of life and it had a tolerant space for different sects and believers like the Vaishnavas, Saivas, Bauls and even atheists as well as many who could be described as animists. The present propagandists of Hindutva are hell-bent on erasing these differences and variety and make out of these a strong, indivisible and militant community which regards the Muslim as its antagonistic ‘other’. The Hindutvavadis also believe that their forerunners, the so-called Aryans, were born in India. In that sense, they are all ‘bhumiputras’ or sons of the soil. But this claim is, to say the least, fanciful and it runs against any scientific theory of evolution. Mankind originated in Africa, that is the tested truth.

Again, the saffron family has posited Rama as the avenging god, some sort of a Jehova. This is not the compassionate Ram of Tulsidas and Krittibas. If you desire to get the essence of Hindu religion, read Kshiti Mohan Sen, Sukumari Bhattacharji and not Guru Golwalkar.

Dasgupta: In order to make things worse, RSS chief Mohan Bhagwat has described India as a Hindu country for all practical purposes. But this description goes against the spirit and content of our Constitution…

Bagchi: This is not something strikingly new. Mohan Bhagwat and his forbearers as well as followers have always dreamt of a Hindu India and are persisting with their dream. But in order to realise this dream, the Constitution has to be altered radically. Moreover, there are millions of Hindus who are totally against the RSS interpretation of the Hindu religion. Lest we forget, the saffron family still dreams of Akhand Bharat which will include Bangladesh and Pakistan. Well, fantasy ought to have its limits.

Dasgupta: It follows that the BJP government, supported by other constituents of the saffron family, are trying to mould and capture one institution after another. For example the Indian History Congress and the Indian Science Congress. The affected scientists and historians are putting up a stiff resistance. How can we stall and block this calculated process of capture?

Bagchi: Let me give specific examples of such aberrations. While denigrating the Muslim-governed Middle Ages, the Hindutvavadis have claimed that it was a pitch-dark age with no light emanating from any point. But, it needs to be recalled, Hindustani classical music wouldn’t have flourished without the contribution of Muslims. How can we divorce Amir Khan from our tradition of classical music? Shalimar Garden in Kashmir was created by Muslims. The first documented history of that period was penned by Abul Fazl. Lastly, the Indian Middle Age recalls with pride the presence and acts of Guru Nanak, Mirabai, Sant Kabir, Tansen and above all, Emperor Akbar. Of course, Taj Mahal should be included in the list. Unable to ignore it, saffronites have floated the idea that it was a Hindu temple originally.

The assault on the Science Congress has been even more ridiculous and comical. Let us give some examples:

These examples could be multiplied. The moot point is that the BJP hates anyone who can think, analyse, dissect and question. The latter constitutes the elite group which the BJP will not touch with the tip of a bargepole. It wants to go ahead with the million gullible ones. They would claim the people and masses are with them, not finicky intellectuals.

Scientists, artists, historians, writers should unite and draw up programmes of retaliatory action against the present dispensation. Victory in the ongoing election is crucial to battle the pervasive intolerance. What is most unfortunate, and even tragic, is that the Opposition failed to come together and organise a one-to-one contest on every Lok Sabha seat. Had this taken place, at least in Uttar Pradesh, the defeat of the saffron family would have been a foregone conclusion.