His life trajectory might imitate shades of Feroze Gandhi's. Married to the ambitious daughter of a political eminence, then estranged. Uncomfortable with his spouse's foray into politics and unafraid to publicly voice contrarian views. Cynical, even bitter, about political dynasties and their ways, quite content to plough a lone furrow. 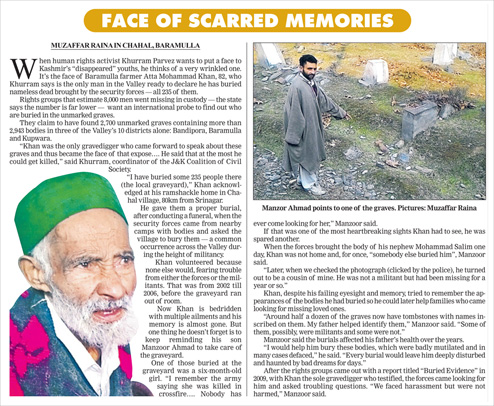 New Delhi, March 1: His life trajectory might imitate shades of Feroze Gandhi's. Married to the ambitious daughter of a political eminence, then estranged. Uncomfortable with his spouse's foray into politics and unafraid to publicly voice contrarian views. Cynical, even bitter, about political dynasties and their ways, quite content to plough a lone furrow.

The Feroze-Indira marriage bore two sons. Javed Iqbal Shah and Mehbooba Mufti have two daughters, Irtika and Iltija. They are both known as girls of the Mufti clan; their father, and the protagonist of this story, has not had any touch with them in a long time. "The inner workings of the Muftis are strange, and to me very upsetting," he tells The Telegraph. "In fact their ways are responsible for my parting with Mehbooba. It's a long story."

Shah has chosen to speak his mind at a time when Mehbooba Mufti, PDP boss and anointed heir of the late Mufti Mohammed Sayeed, is struggling to extract a new deal from the BJP as precondition for reviving the alliance in Jammu and Kashmir.

"I would like to hope Mehbooba is able to deliver but the fact is she is wrapped up in contradictions, this alliance (with the BJP) re-staged or re-adopted, does not leave much room for delivery," Shah says. "It is close to two months since Mufti sahib passed away, so if she chooses to take the plunge even if things (in the alliance) are amiss, I doubt she is herself hopeful of making a difference."

To many Kashmiris, Shah has become known as a fierce animal rights activist - he has fought against the culling of street dogs in the Valley to control their exploding population - but Shah remains a political person with sharp, even acidic, views.

Of the Muftis' PDP he is perhaps the most trenchantly critical. "From seeking to empower people, the PDP ended up with one family centralising power. Every second relation is legislator, contesting candidate or office bearer," Shah says.

"The present standoff (between Mehbooba and the BJP) is nothing but the usual blackmail that this opportunist conglomeration of people called PDP is given to. Why are the terms it is negotiating with the BJP a riddle wrapped in a mystery inside an enigma?

"Personal comforts apart, where are the benefits for which PDP formed the coalition? Having described Prime Minister Modi as the best PM India has had and his Jammu & Kashmir package as historic, what are the Muftis now seeking and for whom?

"The PDP is a depreciated form of the National Conference, that's all. Time will prove the PDP-BJP alliance is farthest from the interests of the people of the state."

So does Shah himself want to turn a player on the political stage? He did get inducted into the National Conference a while ago, but didn't last there long. "I cannot play chamcha, that is my problem, not in the PDP, not in the NC, I have a mind of my own, I have ideas, I am working on things, but I will not subscribe to political dynasties."

Shah's troubles with the Muftis began not very long after he and Mehbooba were married in 1984. They were close family. Shah and the late Mufti were first cousins. Mehbooba, in fact, was seven years Shah's senior. But they were both young - Mehbooba finishing her LLB, Shah on the doorstep of university. It was, according to Shah, Mehbooba who took the initiative and proposed; they decided it was a good idea to get married. Perhaps not, Shah was soon to realise.

"I found the Muftis' political practices perverted entirely to suit their personal interests. I was, in fact, never in favour of Mehbooba joining politics but that was not to be. I was very young, perhaps I also did not realise many things at the time. But politics was the start of our frictions. If Mufti sahib had a political guest, he would expect her (Mehbooba) to be on his side.... I was never comfortable with that," Shah says.

He also holds the late Mufti responsible for the toppling game that ousted Farooq Abdullah's elected government in 1984. "I consider 1984 the beginning of the slide in Kashmir, the genesis of the militancy that was to follow. We have never recovered from that."

More than that, Shah claims, he is privy to many ploys employed by the Mufti, then in the Congress, to become the chief minister. The first was in 1984 when he engineered a split in the Farooq Abdullah-led government and installed a faction led by his brother, Ghulam Mohammad Shah, with Congress backing.

Shah is also a severe critic of the exchange of militants that followed the abduction of the Mufti's daughter, Rubaiya, in 1990, when he was Union home minister. "That exchange in return for Rubaiya multiplied many times over. It was the turning point, in a sense we have never recovered from that."