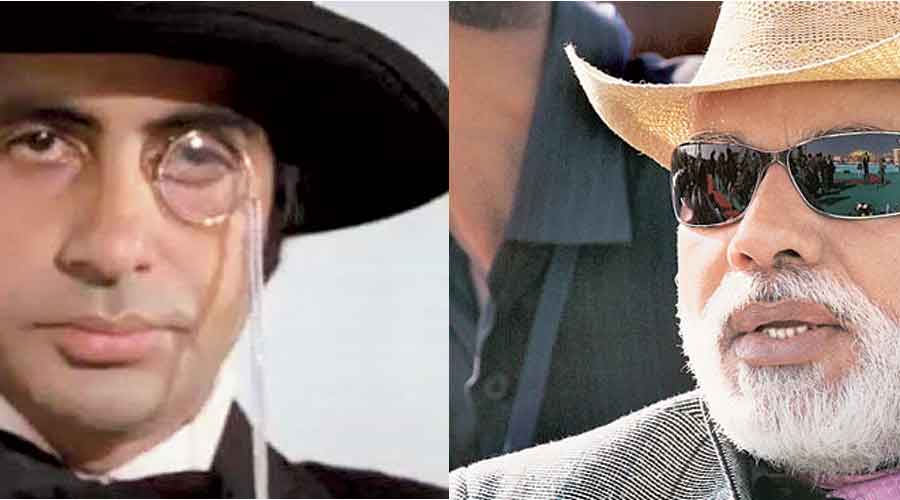 Anthony Gonsalves has met his match.

Na wahan koi hamari seema me ghus aaya hai aur na hi koi ghusa hua hai, na hi hamari koi post kisi dusre ke kabje me hai (Neither has anyone intruded into our frontier there, nor is any intruder there, nor is any of our posts occupied by someone else): Prime Minister Narendra Modi, June 19, all-party meeting.

Or ask Anthony, who said more or less the same thing in Amar Akbar Anthony in 1977: “You see the whole country of the system is juxtapositioned by the haemoglobin in the atmosphere, because you are a sophisticated rhetorician intoxicated by the exuberance of your own verbosity.”

The rapid-fire monologue prefaces a song that proclaims Anthony’s house number to be “420”.

Several veterans expressed shock at what they felt was another instance of the government’s flip-flop on the China crisis. But they had not factored in the ingenuity of the Indian bureaucracy. By evening, “sources” were lecturing journalists on the nuances of semantics.

“The word ‘infiltration’ is used for terrorists crossing from the Line of Control. It is not the same as transgression or incursion, the common parlance for the military action on the Line of Actual Control,” a home ministry official said in the evening.

To be fair to the government, the junior home minister was asked by BJP member Anil Agrawal “whether it is a fact that the cases of infiltration from Pakistan and China has (sic) increased during the last six months”.

“Infiltration” has an element of intrigue and surreptitiousness. By all accounts, the Chinese troops did not “infiltrate”. They appear to have “intruded” or “transgressed” with impunity in plain sight while the Indian government pretended for weeks that all was quiet on the frontier.

The problem with the junior home minister’s statement (his ministry headed by Amit Shah oversees the Indo-Tibetan Border Force that guards the border with China) is that many saw in it confirmation that Modi has accepted China’s position.

Military veteran Pravin Sawhney said: “This confirms that India has accepted China’s 1959 claim line, which is also its (China’s) LAC. This reality was acknowledged by Prime Minister Modi’s June 19 statement -- it is now inbuilt in the new term ‘Border Areas’.”

‘Border Areas’ was the phrase used in the “joint” statement after the meeting of the Indian and Chinese foreign ministers in Moscow last week.

Some saw in the “no-infiltration” statement on Wednesday a hint of an escape hatch for the Prime Minister. Modi can now claim he meant “infiltration”, not “intrusion”.

But a glaring hole in this potential armour for Modi is that no one was speaking about infiltration when 20 soldiers were killed in the Galwan Valley on June 15. The external affairs ministry had used terms like “attempts to transgress”.

An Indian defence ministry document had acknowledged that China had “transgressed” into eastern Ladakh in early May. But the document was quietly removed from the ministry’s website a day after it was uploaded.