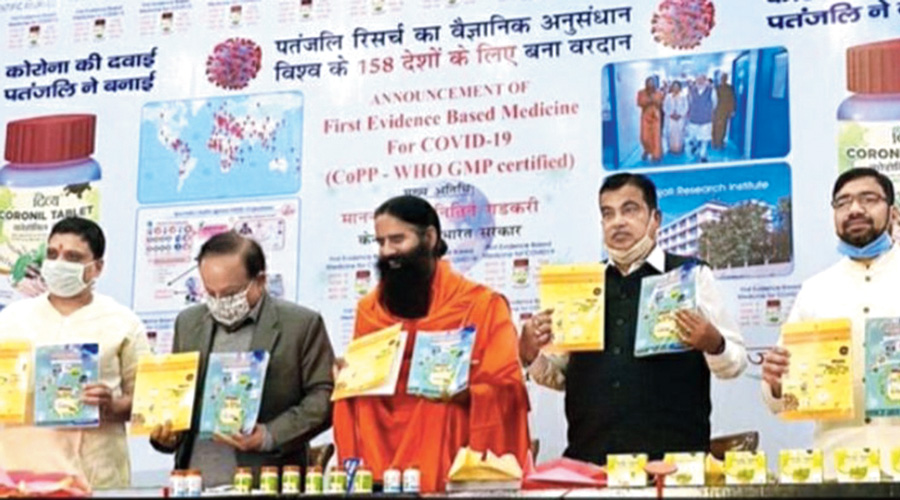 The Indian Medical Association (IMA) on Monday accused Union health minister Harsh Vardhan of breaching ethics by joining an event by an ayurvedic company to promote through misleading messages a herbal cocktail touted as an anti-Covid-19 medication.

The IMA, the country’s largest body of doctors, asked Vardhan to explain why he had associated himself with an event on Friday where Patanjali Ayurved claimed it had developed the “first evidence-based medicine for Covid-19”.

The IMA said Vardhan -- a medical doctor -- had breached a code of ethics doctors are bound to uphold.

The event was attended by yoga evangelist Baba Ramdev -– the public face of Patanjali Ayurved -– and featured a banner that said in large red letters: “Announcement of First Evidence Based Medicine for COVID-19 (CoPP-WHO GMP certified)”.

CoPP stands for “certificate of pharmaceutical product”, a reference to a certificate from India’s drug regulatory authority relating to good manufacturing practices (GMP) and issued in a format prescribed by WHO. Doctors underlined on Monday that GMP had nothing to do with the efficacy of a product.

On Friday, as an impression gained ground after the event that the Coronil tablet had received certification from the ayush ministry as a medicine supporting Covid-19 treatment in line with WHO’s certification scheme, Patanjali managing director Acharya Balkrishna issued a clarification.

Balkrishna tweeted: “We want to clarify to avoid confusion that our WHO GMP compliant COPP certificate to Coronil is issued by DCGI, Government of India. It is clear that WHO do not approve or disapprove any drugs. WHO works for building a better, healthier future for people all over the world.”

Hours after the event on Friday, WHO’s South East Asia Regional Office had tweeted: “WHO has not reviewed or certified the effectiveness of any traditional medicine for the treatment of Covid-19.”

However, the way the banner was emblazoned behind the ministers (road transport and highways minister Nitin Gadkari was the chief guest) and the claim was drafted gave the false impression that the medicine had been approved by WHO, IMA executives said.

The IMA, which has a membership of over 350,000 doctors across India, has now questioned the minister’s decision to join the event.

The “false and fabricated projection of an unscientific medicine by the health minister” and the denial by WHO is a “slap and insult” to the people of India, the IMA said in a statement released on Monday.

“We are asking – why did he have to go there?” said Johnrose Austin Jayalal, the IMA’s national president.

The IMA has asked minister Vardhan whether it was appropriate for him to participate in an event where a product was being promoted in “unethical, wrong and false ways to the country”.

“We’re in the middle of the Covid-19 epidemic – what if people see the minister and this event on TV channels and then buy the medicine,” said Jayesh Lele, the IMA’s general secretary.

The Union health ministry has not responded to an email query from this newspaper seeking Vardhan’s response to the criticism from sections of the medical community. An email sent to the media division of Patanjali Ayurved had not elicited a response until Monday night.

Lele and Jayalal said the banner screaming “WHO” and “GMP” was probably intended to create the false impression that the product had WHO certification.

“GMP is completely different – it has nothing to do with the efficacy of a product,” Lele said. “Efficacy has to be evaluated through randomised double-blinded placebo controlled trials. Why don’t they do such a trial?”

The IMA has underscored that doctors are bound by a code of ethics that prohibits them from approving, recommending, endorsing, certifying or issuing statements on drugs or medicines “in any form or manner of advertising”.

Vardhan had tweeted that he was pleased to have joined the event to mark the release of a “scientific research paper on the first evidence-based medicine for Covid-19 developed by Patanjali”.

Several doctors had over the weekend expressed concern that the minister’s presence at the programme and his tweets were tantamount to endorsing the product, which they say remains to be rigorously assessed.

Doctors at a private medical college in Jaipur who had conducted a clinical trial on Coronil have published a scientific paper in the peer-reviewed medical journal Phytomedicine. But several medical researchers within and outside India have questioned the content of the paper, highlighting what they believe are “flaws” and “inconsistencies”.