India will emerge victorious in case of any war: Rajnath Singh

PoK is a part of Indian territory; joint theatre commands to be set up: Defence minister 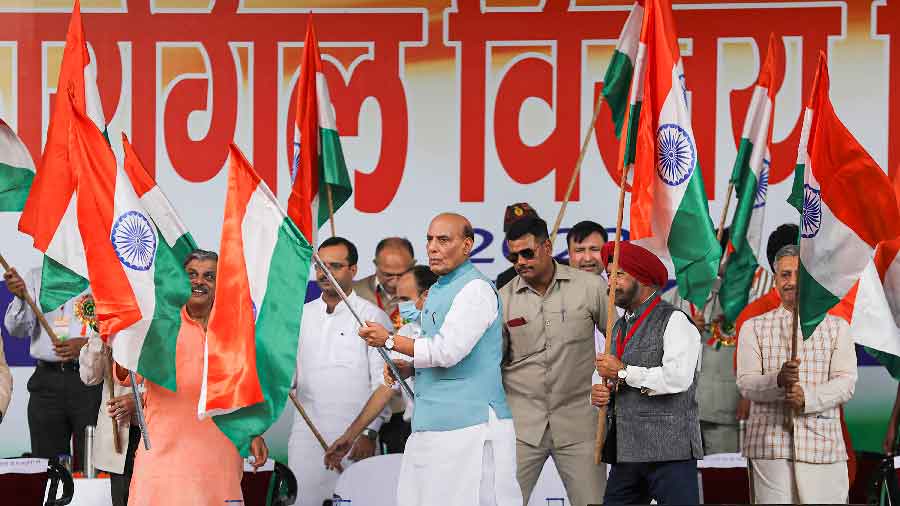 Defence Minister Rajnath Singh on Sunday said India is well-equipped to give a befitting reply to "anyone who casts an evil eye on us" and expressed confidence that the country will emerge victorious in case of any war.

Pitching for reclaiming Pakistan-occupied Kashmir (PoK), Singh said that it is a part of India and will continue to remain part of this country.

"I want to tell you with confidence that if any foreign powers cast an evil eye on us and if there is a war, we will become victorious," Singh said during an event organised to commemorate Kargil Vijay Diwas' here.

He said that India defeated Pakistan in all the wars since 1947 and after bitter defeat, they engineered proxy wars.

After tasting defeats in direct wars of 1965 and 1971, Pakistan adopted the path of proxy war. For over two decades, it has tried to bleed India with a thousand cuts'. But, time and again, our brave soldiers have shown that no one can disturb the unity, integrity and sovereignty of India, Singh said, assuring the nation that the armed forces are ready to face all future challenges.

A strong and confident new India is well-equipped to give a befitting reply to anyone who casts an evil eye, he said.

India has become a strong and confident nation which is well-equipped to protect its people from anyone who tries to cast an evil eye on us, the defence minister said.

Singh said that during the wars with Pakistan and China, people of Jammu and Kashmir stood by their forces.

"Whether one is Hindu or Muslim, all stood by their forces. We cannot forget," he said.

Paying tributes to the freedom fighters and the armed forces personnel who have laid down their lives since Independence in the service of the nation, Singh stated that it was the spirit of national pride at the core of their values that protected the unity and integrity of India.

He asserted that the sole aim of Prime Minister Narendra Modi-led government is to safeguard the interests of the nation and it has taken a series of steps to develop a self-reliant defence ecosystem that provides indigenous state-of-the-art weapons and equipment to the armed forces to fight all kinds of future wars.

Sharing his views on the numerous challenges faced by India post-Independence, Singh said the entire area of Jammu and Kashmir (J&K) and Ladakh became the "main war theatre" during 1948, 1962, 1965, 1971 and 1999 wars, when enemies tried to cast an evil eye, but their plans were thwarted by the gallant Indian soldiers.

The defence minister also spoke about the brave deeds of Brigadier Usman and Major Somnath Sharma in 1948; Major Shaitan Singh's valour in 1962; India's historic victory in 1971 war and the contribution of Kargil bravehearts Captain Vikram Batra and Captain Manoj Pandey who laid down their lives to protect the unity and integrity of India and "continue to be an inspiration to the people, especially the youth".

He also paid respects to the Indian soldiers who displayed unmatched bravery during the Galwan valley incident and ensured that the Indian tricolour continues to fly high.

Singh remembered the then Prime Minister late Atal Bihari Vajpayee for his leadership and words of encouragement to the armed forces personnel during the Kargil war despite numerous challenges and international pressure.

He also made special mention of the support extended by the people of J&K to the armed forces, commending their commitment to safeguard the interests of the nation like all other states.

The defence minister stated that J&K will always be an integral part of India and the government is ensuring that the Union territory, like the rest of the country, touches newer heights of progress.

Terming Article 370 as an artificial legal barrier, he asserted that its abrogation brought a new dawn of hope to the dreams and aspirations of the people of J&K, especially the youth.

The decision opened new avenues for the welfare of the people and the UT is now progressing at a much faster rate, he said.

On PoK and Gilgit-Baltistan, the defence minister stated that these areas are illegally occupied by Pakistan and a resolution to free them has been unanimously passed in the Parliament of India.

"PoK is a part of Indian territory and will continue to do so. How is it possible that Baba Amarnath (Lord Shiva's form) is in India and Maa Sharda Shakti is across the Line of Control," he said.

Referring to the Sharda Peeth which has the ruins of a temple to Hindu goddess Saraswati, also known as Sharda, Singh said how can Shiv Saroop (Amarnath) be on this side of J&K and Shakti Saroop (Sharda) in PoK side.

"God should give better sense to Pakistan. I cannot say beyond that," he said.

Defence Minister Rajnath Singh on Sunday said the Centre has decided to set up joint theatre commands of the tri-services to enhance coordination among the armed forces.

The defence minister also said India is moving quickly from being the world's largest importer of defence equipment to an exporter.

He was speaking during a programme organised by the Jammu Kashmir People's Forum at Gulshan Ground near Jammu University here to pay tributes to the martyrs of the Indian Armed Forces."Keeping in view (joint operations as seen in Operation Vijay in Kargil), we have decided to set up joint theatre commands (in the country)," Singh said.

Paying tributes to the Kargil martyrs, the defence minister said the country cannot forget their supreme sacrifice to safeguard the country's territorial integrity and sovereignty."It is the duty of the society and the people to give their utmost respect to the martyrs and their families," he said."Whatever support you can offer, do it for their families. It is the responsibility of each citizen," he added.

Singh said the country has started defence exports worth Rs 13,000 crore and it has fixed a target of Rs 35,000 to Rs 40,000 crore by 2025-26.RSS general secretary Dattatreya Hosabale also addressed the gathering.

This is Singh's second visit to Jammu in a little over a month. He visited the region on June 17 on the occasion of the 200th year of coronation of Maharaja Gulab Singh.