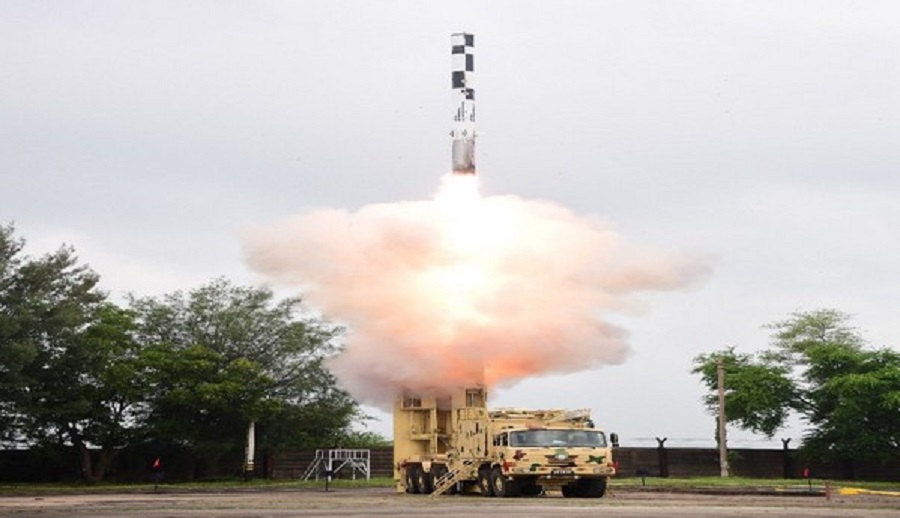 A gas generator at the bottom of the canister pushed the missile out it. Its first stage ignited then and fell off.
Twitter/@ani_digital
Our Bureau, Agencies   |   Balasore   |   Published 03.10.20, 04:39 PM

India on Saturday successfully test fired its indigenously developed nuclear capable hypersonic missile 'Shaurya' with a strike range of around 1,000 km from a test range in Odisha, defence sources said.

The surface-to-surface tactical missile was blasted off from a canister strapped to the ground launcher from launch complex 4 of the Integrated Test Range (ITR) in the APJ Abdul Kalam Island around 12.10 pm and covered the desired range, they said.

It is 10 metres long, 74 cm in diameter and weighs 6.2 tonnes. Its two stages use solid propellants.

Describing the trial as successful, the sources said that the state-of-the-art missile performed a manoeuvre in the closing stages of its flight and hit the impact point in the Bay of Bengal with precision and accuracy.

A gas generator at the bottom of the canister pushed the missile out it. Its first stage ignited then and fell off.

The second stage went into action after this, a Defence Research and Development Organisation (DRDO) official said.

During the test flight, the missile was tracked by various telemetry stations and radars and performed well, he said.

DRDO officials rate Shaurya as one of the top 10 missiles in the world in its class with its high performance navigation and guidance systems, efficient propulsion systems, sophisticated control technologies and canisterised launch," sources said.

The missile can be launched from silos and canisters mounted on a truck and fixed on the ground, they said adding that it can be easily moved around. A truck itself can become a launching platform.

"Shaurya" missiles can kept in locations where the enemies would not be able to detect them. Besides, it cannot be detected by satellite imaging, the sources said.