India signs seven deals with Bangladesh amid upswing in relations 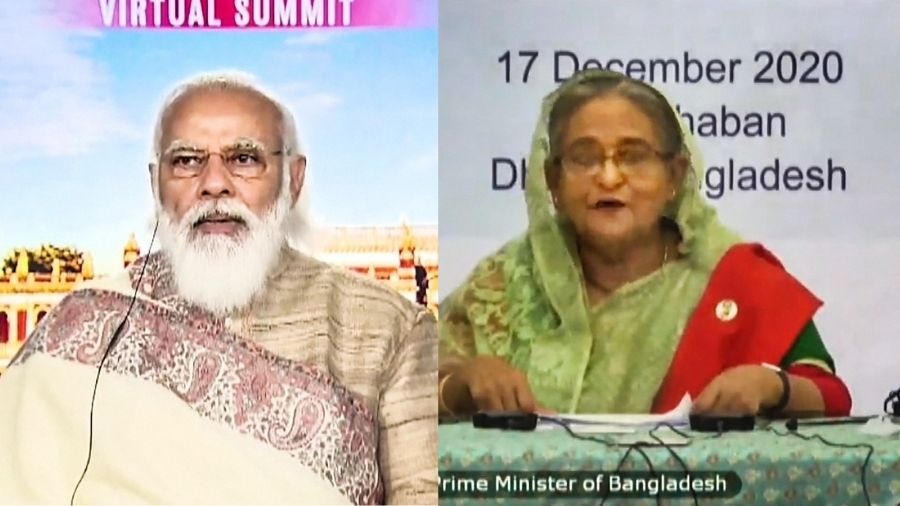 India and Bangladesh on Thursday sealed seven pacts amid their rapidly growing ties, to expand cooperation in several areas. They also restored a cross-border rail link, which was operational till 1965.

In a virtual summit between Prime Minister Narendra Modi and his Bangladeshi counterpart Sheikh Hasina, the countries vowed to restore the Chilahati-Haldibari railway link and signed the pacts providing for cooperation in areas of hydrocarbons, agriculture and textiles among others.

Modi and Hasina jointly inaugurated a digital exhibition on Bangladesh's founder Mujibur Rahman and Mahatma Gandhi in an effort to celebrate the life and legacies of the two iconic leaders.

The Chilahati-Haldibari rail track inauguration is expected to better the connectivity between Assam and Bengal from Bangladesh. It was part of the broad gauge main route from Kolkata to Siliguri till 1965.

In his initial statements, Modi said Bangladesh is a key pillar of India’s ‘Neighbourhood First’ policy and it has been an important priority for him to strengthen ties between the two countries.

“We feel proud to celebrate 'Bijoy Dibosh' with you to mark Bangladesh's historic victory over anti-liberation forces,” Modi said, adding that the ties between India and Bangladesh have remained good despite the coronavirus pandemic.

“It has been a challenging year due to the epidemic. But it is a matter of satisfaction that India and Bangladesh had good cooperation in this difficult time,” the prime minister said.

“We are also having good cooperation in the field of vaccines. We will also take special care of your needs in this regard,” he said about the coronavirus vaccine.

Modi also thanked Hasina for inviting him to visit Bangladesh next year.

“Thank you for the invitation to visit Bangladesh next year. It would be a matter of pride for me to pay tribute to Bangabandhu with you. Bangladesh is a major pillar of our 'Neighbourhood First' policy,” he said.

Hasina in her remarks called India a “true friend”.

“I pay deep homage to the three million martyrs who laid down their lives. I pay tribute to the members of the Indian armed forces martyred in the war and to their families. I pay my gratitude to the government and the people of India who extended their whole hearted support for the cause of our nation,” she said.

The ties between India and Bangladesh have witnessed an upswing in the last few years. Both sides have scaled up trade and economic engagement besides implementing a number of connectivity and infrastructure projects.