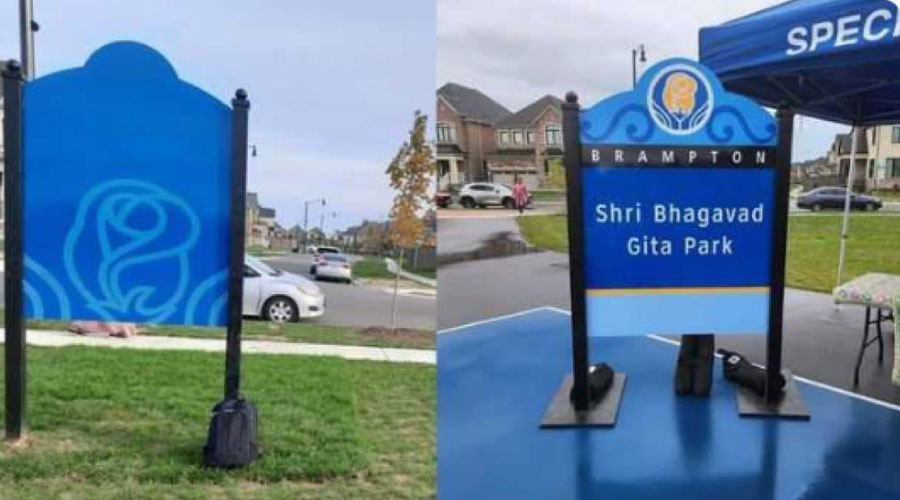 The Indian high commission in Canada on Sunday alleged another hate crime in Brampton, Ontario, but local police denied the allegation of vandalism at the recently opened Shri Bhagavad Gita Park.

Subsequently, Indian-origin parliamentarian Chandra Arya and the Brampton mayor, who had initially raised the alarm on social media, appeared to have deleted their tweets. But the high commission had not removed its post from Twitter 18 hours later.

“We condemn the hate crime at the Shri Bhagvad Gita Park in Brampton. We urge Canadian authorities & @PeelPolice to investigate and take prompt action on the perpetrators,” the high commission had tweeted on Sunday, at a time bilateral relations have hit a rough patch over Ottawa allowing a Khalistan referendum.

The mission posted two pictures side by side, one showing a signboard carrying the name “Shri Bhagavad Gita Park”, and another showing the board with the name missing. Residents had apparently complained about this, prompting the police and parks department to probe the matter.

The Peel police, who had observed Sunday — Mahatma Gandhi’s birth anniversary — as International Day of

Non-Violence, later tweeted to clarify that there was no evidence of vandalism at the park.

The park had been named Shri Bhagavad Gita Park last week, when the Canadian House of Commons also passed unanimously a resolution moved by Arya to declare November as Hindu Heritage Month.

“Shri Bhagavad Gita Park, #Brampton / - Permanent sign is still waiting for the lettering to be applied / - There was no evidence of vandalism to the permanent sign or any park structure / - It was a temporary park sign used in the park naming ceremony,” the Peel police posted in an update.

The Brampton City parks department said: “We learned that the reported blank sign was installed by the builder as a placeholder until the permanent Shri Bhagvad Gita Park sign can be replaced tomorrow. We are pleased to learn of this outcome. We thank the community for bringing this to our attention, and ensuring that Brampton is a safe and inclusive place to call home.”

The Brampton City community services and communications department too issued a clarification, saying: “The sign was damaged during the original install & a

city staff member brought it back for unplanned maintenance & to reprint. The blank sign was left up during repairs. This is not usual process as we never remove a sign unless damaged or its name changes.”

Arya, who had initially raised the alarm and issued a statement, appeared to have deleted the tweet following the clarifications. In its place, he re-tweeted the clarification issued by the parks department, which had been posted by mayor Patrick Brown.

The external affairs ministry here did not respond to the query whether its Ottawa mission’s retention of its tweet despite all these clarifications reflected India’s dissatisfaction with the Canadian authorities’ response.