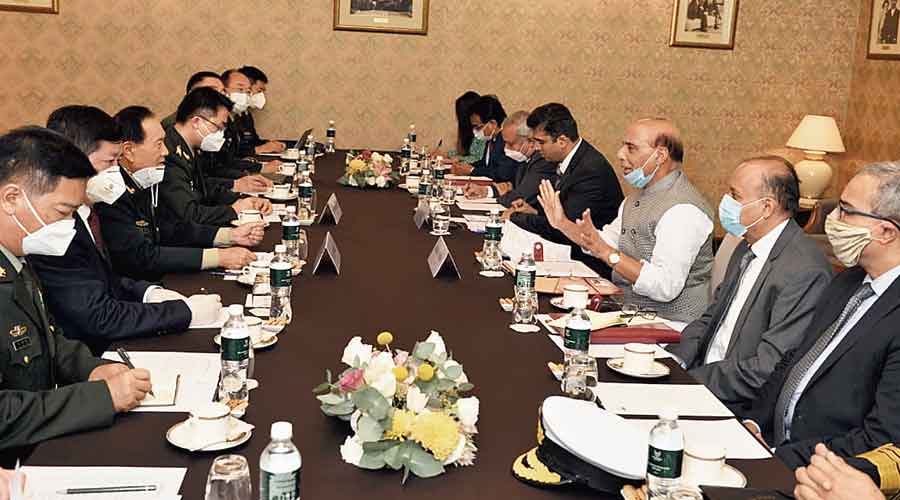 Defence minister Rajnath Singh and his Chinese counterpart General Wei Fenghe met for over two hours in Moscow on Friday, hours after the Indian foreign secretary and the army chief publicly acknowledged the gravity of the situation on the Ladakh border.

“The meeting between Raksha Mantri Shri Rajnath Singh and Chinese Defence Minister General Wei Fenghe in Moscow is over. The meeting lasted for 2 hours and 20 minutes,” the Indian defence minister’s office tweeted close to midnight.

Rajnath and Wei met on the sidelines of the Shanghai Cooperation Organisation (SCO) defence ministers’ meeting in Moscow.

This is the first face-to-face contact at the political level between India and China since the Chinese troops opened multiple fronts along the Line of Actual Control in eastern Ladakh and changed the status quo in May.

The meeting was apparently sought by Wei, a state councillor and member of the Central Military Commission that controls the People’s Liberation Army of China.

“It was a very crucial dialogue to resolve the border standoff in Ladakh,” a defence ministry official said in Delhi.

The political intervention comes at a time military-level talks appeared to have remained inconclusive for five straight days. This week, more than 25 hours of discussions had been held between the military commanders of both sides. Taking into account the time spent on translation, it still adds up to at least 12 hours of parleys.

Earlier in the day, Indian foreign secretary Harsh V. Shringla described the situation along the Line of Actual Control (LAC) with China as “unprecedented” and army chief Gen. Manoj Mukund Naravane said it was “delicate and serious”.

This is the first time there has been a public acknowledgement at such a high level of the gravity of the situation. This also seems to be part of a calibrated change in the communication strategy.

But the foreign secretary underscored the significance in the fact that the two countries have remained engaged both diplomatically and militarily through the most difficult moments of the crisis.

The foreign secretary said this while delivering a lecture  organised by the Indian Council of World Affairs.

“We haven’t lost any lives on the (China) border in the last 40 years. We haven’t seen this magnitude of amassing of forces on the border also in recent years is something we have to take stock of. What is important is that during difficult moments of this crisis, we have been engaged both militarily and diplomatically with China. The pandemic has not stopped us from engaging.”

Gen. Naravane, who arrived in Ladakh on Thursday, said: “The current situation along the LAC is a bit delicate and serious. For our security, we have undertaken some precautionary steps. We are sure that the problem can be resolved fully through talks.”

“The morale of the jawans is very high and they are ready to face any challenges. I would like to reiterate, like always, that our officers are the finest in the world. They will make not just the army but the entire country proud,” the army chief added.