The engagement between S. Jaishankar and his Chinese counterpart Wang Yi could prove a watershed in finding a peaceable way out of the border belligerence in eastern Ladakh or an ominous washout for India 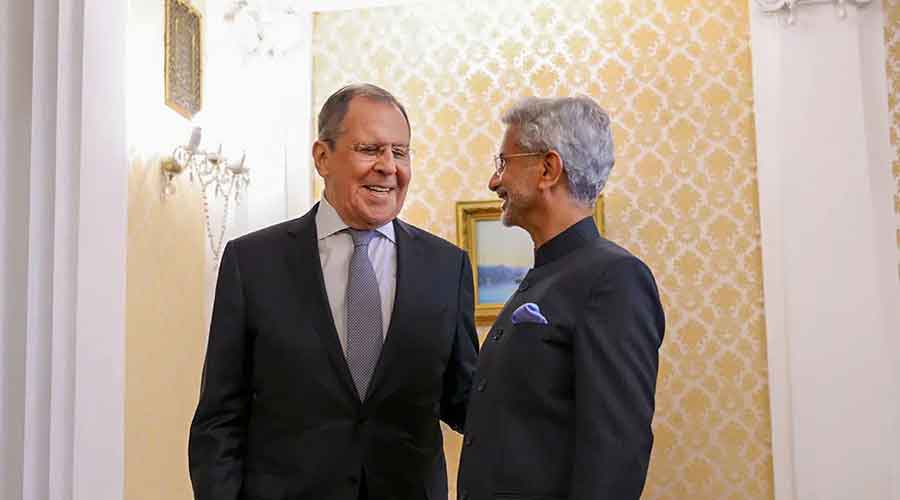 Thursday’s scheduled engagement between foreign minister S. Jaishankar and his Chinese counterpart Wang Yi on the sidelines of the Shanghai Cooperation Organisation (SCO) ministerial session in Moscow could prove a watershed in finding a peaceable way out of the border belligerence in eastern Ladakh or an ominous washout for India.

The meeting comes after close to a dozen fruitless attempts to settle differences at the military level and failure to secure a breakthrough might leave New Delhi with just one real shot at unlocking the impasse: a Narendra Modi-Xi Jinping summit.

But despite the Modi establishment’s widely touted claims of “chemistry” between the two leaders, the possibility of such a summit may be snagged by two factors. First, Modi has famously let the Chinese off any blame and not brought the faintest mention of China to his lips since trouble began to rumble along the Line of Actual Control (LAC) in late April. It will be tricky for him to suddenly claim a solution to a problem he has never admitted to.

Second, Xi may be plainly uninterested in discussing border troubles at a time when the People’s Liberation Army (PLA) is busy consolidating to gain strategic advantage in eastern Ladakh.

On their part, the Chinese have also admitted to no wrongdoing and put the blame for border transgressions squarely on India. The Chinese have claimed sovereignty over the Galwan Valley, where 20 Indian soldiers were killed in violent clashes in mid-June. India has countered the Chinese claim, but let its objections rest there.

Contrary to fairly standard norm, the Chinese ambassador has not once been summoned by the foreign office. Not when he put out a press release asserting claim over Galwan as Chinese territory, not when the PLA killed Indian soldiers and took several captive.

That said, experts believe that it has become incumbent upon New Delhi to demonstrate political leadership and take ownership of a crisis that has flamed for more than four months now.

“Military and diplomatic efforts have failed to achieve a breakthrough,” army veteran and defence analyst Sushant Singh told The Telegraph on Wednesday.

“The top political leadership has been mostly invisible through the crisis. The Prime Minister did not even mention China by name in the all-party meeting on June 19 or in his Independence Day speech. Modi has met Xi 18 times so far, including at two informal summits, and it was expected that he would take ownership of the crisis and deal with China at the highest level. Unfortunately that has not happened.”

Chief of Defence Staff (CDS) Gen. Bipin Rawat has asserted that India can exercise a “military option” and the army brass have spoken anonymously of being prepared to “deal with any military contingency”, but strategic analysts maintain New Delhi’s best option is to find a political or diplomatic solution given China’s patent military and economic advantages over India.

The blow-hot-blow-cold standoff shows few signs of abating. Earlier this week, shots were fired on the India-China frontier for the first time since 1975; the previous occasion firearms were employed by border troops was at Tulung La in the Arunachal sector. Massing of troops and military hardware has continued apace on both sides of the invisible LAC these past four months.

The last three major border standoffs with China — at Depsang in 2013, Chumar in 2014 and Doklam in 2017 — were resolved through diplomatic effort. The agreements arrived by both the sides were implemented by local military commanders through mutual talks on the ground, a diplomat involved in the 2014 Chumar negotiations explained.

During the 73-day-long Doklam standoff in 2017, “13 rounds of diplomatic discussions were held”, led by then Indian ambassador to Beijing Vijay Gokhale and augmented “from time to time” by officials from Delhi.

This was stated by foreign minister Jaishankar, who was then the foreign secretary, to the parliamentary standing committee on foreign affairs.

Through the current standoff, Jaishankar has had one telephone conversation with his Chinese counterpart, while national security adviser Ajit Doval has also had a virtual meeting at the level of the Special Representatives. Three WMCC meetings have also taken place, but they have only acted as a prelude to the meetings at the level of the Corps Commanders.

It isn’t yet clear what brief Jaishankar has carried along for his talks with Wang. “What exactly I am going to tell them, I am not going to tell you…. But the solution lies in diplomacy,” Jaishankar said during a recent media interaction.

The least he might expect is to get an answer to a question he himself rhetorically posed recently when he said: “We have a very large number of Chinese forces (along the tension-ridden LAC) and frankly we are at a loss to know why.”