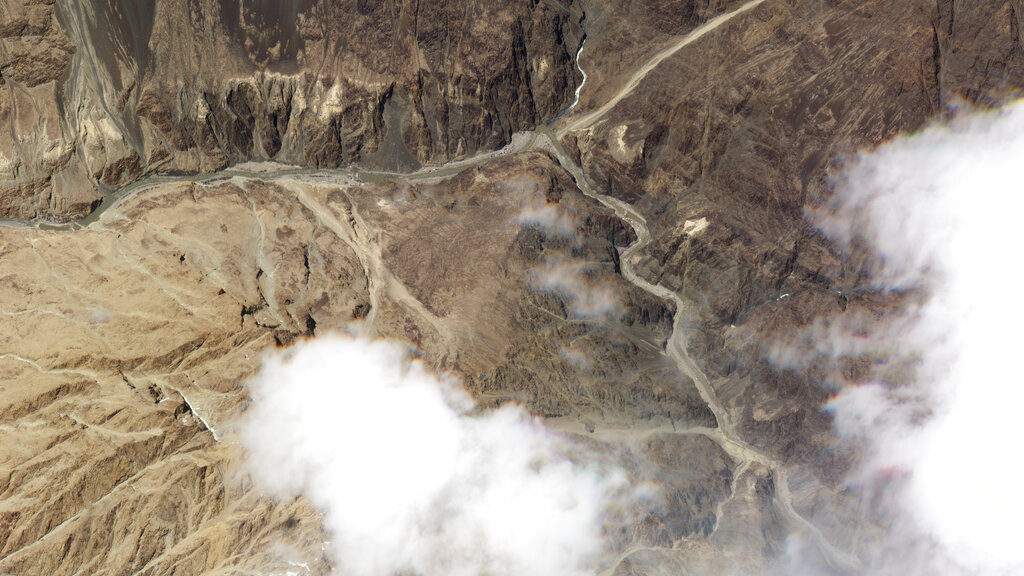 This June 18, 2020, satellite photo released by Planet Labs, shows the reported site of a fatal clash between Indian and Chinese troops in the Galwan River Valley in the Ladakh region near the Line of Actual Control, BKalong their disputed border high in the Himalayas.
(AP)
Reuters   |   Singapore   |   Published 20.06.20, 04:23 AM

In the days leading up to the most violent border clash between India and China in decades, China brought in pieces of machinery, cut a trail into a Himalayan mountainside and may have even dammed a river, satellite pictures suggest.

The images, shot on Tuesday, a day after soldiers engaged in hand-to-hand combat in the freezing Galwan Valley in Ladakh, show an increase in activity from a week earlier.

India said 20 soldiers were killed in a premeditated attack by Chinese troops on Monday night at a time when top commanders had agreed to defuse tensions at the Line of Actual Control (LAC), the disputed and poorly defined border between the nuclear-armed neighbours.

China rejected the allegations and blamed frontline Indian soldiers for provoking the conflict which took place at the freezing height of 14,000 feet in the western Himalayas.

The 4,056km border between India and China runs through glaciers, snow deserts and rivers in the west to thickly forested mountains in the east.

The Galwan Valley is an arid, inhospitable area, where some soldiers are deployed on steep ridges. It is considered important because it leads to Aksai Chin, a disputed plateau claimed by India but controlled by China.

The satellite pictures, taken by Earth-imaging company Planet Labs and obtained by Reuters, show signs of altering the landscape of the valley through widening tracks, moving earth and making river crossings, an expert said.

The images shows machinery along the bald mountains and in the Galwan river.

“Looking at it in Planet, it looks like China is constructing roads in the valley and possibly damming the river,” said Jeffrey Lewis, director of the East Asia Nonproliferation Program at California’s Middlebury Institute of International Studies.

Chinese foreign ministry spokesman Zhao Lijian said he was unaware of the specifics on the ground but reiterated that the Indian Army had crossed into Chinese territory in several places in recent days and that they should withdraw.

The clash was the most serious since 1967. Since early May, soldiers have faced off on the border where India says Chinese troops had intruded and set up temporary structures. The confrontation turned into a deadly brawl on Monday.

The fighting was triggered by a row over two Chinese tents and observation towers that India said had been built on its side of the LAC, government sources in New Delhi and in Ladakh region said.

China had sought to erect a “structure” in the Galwan Valley on India’s side of the LAC even after military officials had reached an agreement on June 6 to de-escalate, external affairs minister S. Jaishankar told China’s senior diplomat Wang Yi in a phone call on Wednesday, according to the ministry. It was not immediately clear to what structure he was referring.

The problem arose when an Indian patrol visited the area near a ridge to verify a Chinese assertion that its troops had moved back from the LAC, the two sources aware of the military situation said.

The Chinese troops had thinned out and left behind the two tents and small observation posts. The Indian party demolished the towers and burnt the tents, the sources said.

The satellite images show possible debris from the observation posts on Tuesday morning on a ridge on India’s side of the LAC. There was no such structure in the image taken a week earlier.

A large group of Chinese soldiers arrived and confronted the Indian troops, led by Colonel Santosh Babu. They were lightly armed in line with the rules of engagement at the LAC, one of the sources said.

India and China have not exchanged gunfire at the border since 1967, despite occasional flare-ups. Soldiers are under instructions to keep their rifles slung on their backs.

It was not clear what happened next, but the two sides soon clashed, with the Chinese using iron rods and batons with spikes, one of the sources said.

Col Babu was one of the 20 victims, they said. More Indian troops were rushed in and the confrontation turned into an hours-long brawl eventually involving up to 900 soldiers, the source said. Still no shots were fired on either side.

Zhao rejected the Indian version of the events. “The rights and wrongs of this incident are very clear. The responsibility does not lie with China,” he said.