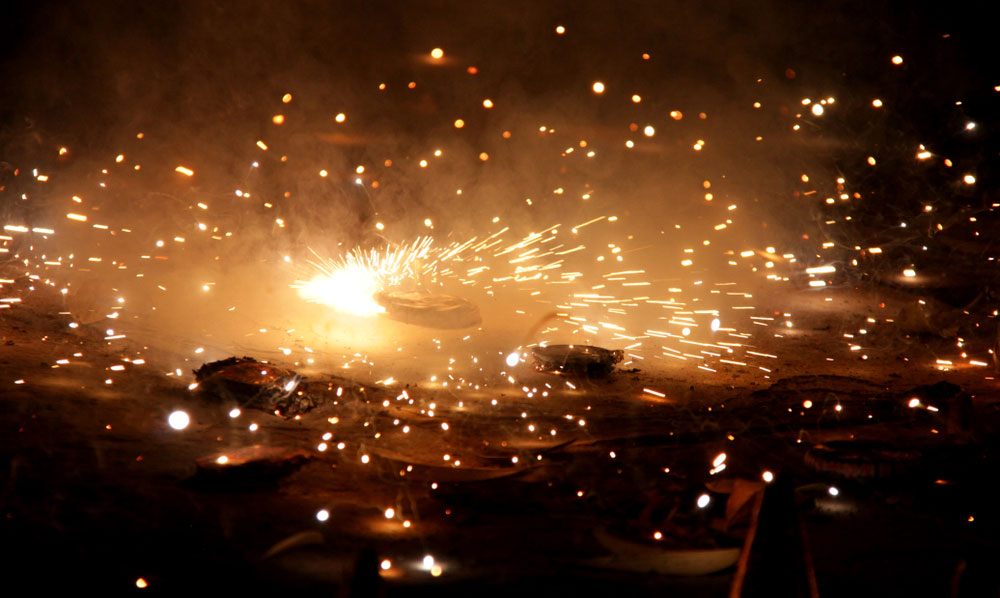 The enormous health risks from crackers posed by air and sound pollution and by the possibility of burns have been at the centre of a raging debate for a few years now
Shutterstock
The Editorial Board   |     |   Published 26.10.18, 02:37 AM

Indians evidently like being deafened and blinded. Nothing else can explain their love for firecrackers, on display most prominently during Diwali but also at the slightest pretext at other times. Yet the enormous health risks from crackers posed by air and sound pollution and by the possibility of burns have been at the centre of a raging debate for a few years now. But every time the Supreme Court rules on the subject there is a sense of collective intransigence. This year, the court has allowed the bursting of crackers for two fixed hours in the evening of Diwali, and variations of the two-hour window for different festivals. It has also ordered that in the national capital territory crackers shall be burst only in designated community spaces; other states should also try for this arrangement at some point. This plan allows for safety, control and shared joy together. In many countries, firework shows are conducted by the local government or municipal body at a scheduled time within a designated space. With the Supreme Court’s suggestion, perhaps India too will reach this civilised understanding of enjoyment one day.

The strongest resistance comes from firecracker manufacturers, who have the most to lose, not least because many of their outfits are illegal. One of their excuses is that lakhs of unorganised labourers depend on this industry. But they have been saying this every time there is a regulatory move, suggesting that their social conscience awakens only when their profits are threatened. This time the big issue instigating both resistance and derision is the court’s instruction about using ‘green crackers’. Once again, this is not novel: ways of lessening pollution and noise have been worked on by scientists and demonstrated to the biggest cracker manufacturers. They seem unwilling to invest in changing the technology of manufacture, especially as the initial costs are high. Other naysayers insist that firecrackers in Diwali are a part of religion, and thus untouchable under Article 25 of the Constitution — the freedom to practise religion. The court has reportedly said that Article 25 is subject to Article 21, the right to life and liberty, hence the health and lives of the people take precedence. The court on its own, or even a most efficient police force, cannot actually change things wholly. It is up to the people to appreciate the importance of their own health and safety.