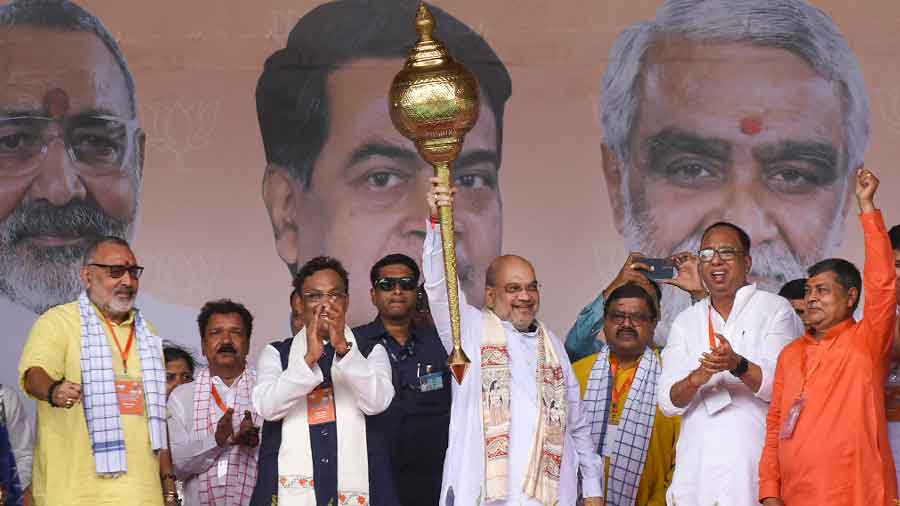 At a rally held in this north Bihar town, Shah asserted that the jodi of Kumar and RJD president Lalu Prasad will be wiped out ( soopda saaf') in the 2024 Lok Sabha polls and, a year later, the BJP will win a majority on its own in the state assembly elections.

Widely regarded as the BJP's principal strategist, Shah arrived in Bihar on his first trip since the party was robbed of power in the upheaval last month.

He, however, refrained from joining issue with the contention of Kumar's JD(U) that the BJP had tried to break the party.

The number of seats won by Kumar's party in 2020 assembly polls was nearly half of our tally. BJP showed magnanimity ( badappan') in backing him as the CM in keeping with its earlier promise. But, with the Lok Sabha polls nearing, his prime ministerial ambitions got the better of him and he backstabbed us, alleged Shah.

The JD(U) has been indirectly blaming the BJP for the fall in its tally in the last assembly polls when the Lok Janshakti Party, then headed by Chirag Paswan, fielded many saffron party rebels against candidates of the chief minister's party.

Shah mocked the seven-party ruling Mahagathbandhan', which also includes three Left parties, for raising apprehensions that the BJP leader's two-day trip of Seemanchal region could lead to communal polarisation in the area, which has a high concentration of Muslims.

The new regime has led to an atmosphere of fear in these border districts. But with (PM) Narendra Modi around, none of you need to be afraid. All of you have been elated over scrapping of Article 370, which wiped off a stigma from the forehead of Mother India. I challenge Lalu and Nitish to utter a word in appreciation of the move, the home minister said.

The BJP leader also raked up Kumar's unsteady relations with colleagues like George Fernandes and Sharad Yadav, blaming it on the CM's lack of ideological commitment and excessive attachment to his chair .

He also sought to drive a wedge between the JD(U) leader and the latter's arch-rival Prasad, saying, Tomorrow, Nitish Kumar might dump the RJD and form a new front with Congress and the Left or he may even seek rapprochement with the BJP .

He (Kumar) cut his political teeth taking part in the anti-Congress stir of 1970s. Now, he is sitting in the laps of Congress and RJD He won the last mandate in the name of Narendra Modi but backstabbed the BJP like he had done eight years ago, Shah alleged.

Kumar had been a BJP ally since the mid 1990s and served as a minister in the Atal Bihari Vajpayee government before becoming the chief minister of Bihar.

He snapped ties with the BJP in 2013, following differences over elevation of Modi, then his Gujarat counterpart, on the national stage. Four years later, he was back in the NDA as the BJP readily came out with offer of support when his alliance with Prasad hit the rocks.

Shah, who reached here in the afternoon, is scheduled to spend the night in adjoining Kishanganj, which is the only district in Bihar with a more than 50 per cent Muslim population.

Besides the rally, he is scheduled to hold meetings with the state BJP core committee, comprising about 20 top leaders, and office-bearers of various district units.

On Saturday, Shah is slated to hold meetings with administrative officials before his departure.