The two-hour meeting was held at Cliff House, the official residence of the Kerala chief minister 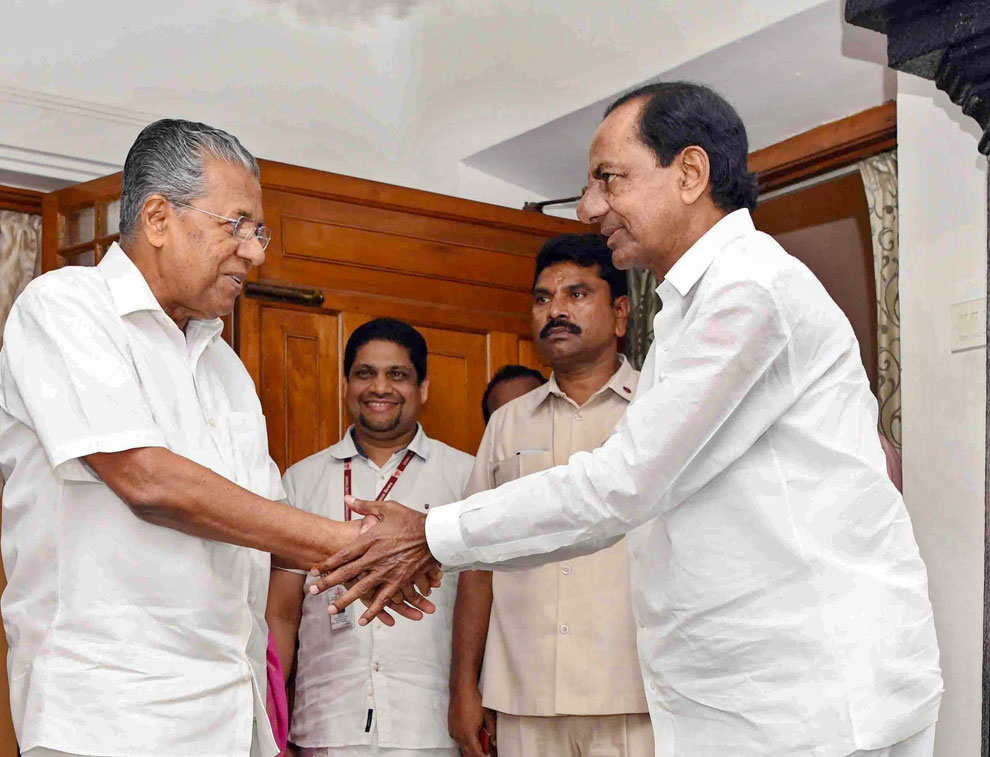 Chief minister Pinarayi Vijayan said on Tuesday that he had discussed “national politics” with his Telangana counterpart K. Chandrashekar Rao and that the TRS leader felt regional parties would come to power after the Lok Sabha elections.

Asked about the meeting between the two leaders after Rao flew down to Kerala capital Thiruvananthapuram on Monday, the CPM politburo member said: “It was a very important meeting. He discussed today’s national politics. In his views, both fronts (the NDA and the UPA) won’t get a clear majority and regional parties will come to power.”

“I thought they were good views as states are facing problems as the spirit of federalism is being denied,” he said, asked what he thought of the meeting with Rao, who had been trying to forge a non-BJP, non-Congress alliance at the Centre.

The Left parties had launched a strident attack on the Congress and its president Rahul Gandhi after he decided to contest the Lok Sabha polls from Wayanad in addition to Amethi in Uttar Pradesh.

The two-hour meeting was held at Cliff House, the official residence of the Kerala chief minister. TRS MPs Santosh Kumar and Vinod Kumar were also present.

Rao is on a two-day visit of Kerala along with his wife Shobha and their two grandchildren. Rao is scheduled to meet DMK chief M.K. Stalin in Chennai on May 13. Rao and Karnataka chief minister H.D. Kumaraswamy of the JDS have also spoken over the phone.

Vijayan on Tuesday accused the Sangh parivar of trying to destroy Kerala and its progressive values by blocking development projects.

“The Sangh parivar has always tried hard to destroy the development and progressive values Kerala has achieved so far,” the CPM politburo member told a media conference in state capital Thiruvananthapuram.

Finance minister T.M. Thomas Isaac had on Monday accused Kerala BJP president P.S. Sreedharan Pillai of writing to the Centre to stall land acquisition for the widening of a key national highway.

Pillai denied the charges and said he had only suggested to Union road transport minister Nitin Gadkari that land acquisition be halted in a flood-hit area in Ernakulam.

“We all know about the vilification campaign the Sangh parivar has unleashed to portray Kerala as the worst state in India,” Vijayan said, referring to the repeated attacks on the state and its secular culture.

“But the people of Kerala stood united,” he added, alluding to the many instances of religious amity displayed by Malayalis.

“The people of Kerala have the common sense to identify those who are working against the state. They should be ready to oppose such campaigns against the state,” the chief minister said, urging people to isolate those who were trying to “destroy” the state and its values.

“The Centre has repeatedly interfered to ensure we don’t get relief offered by countries like the UAE,” Vijayan said, referring to the Gulf nation’s offer of Rs 700 crore in the aftermath of the worst floods in Kerala in a century that left more than 400 dead and washed away thousands of homes and livestock last year.

Vijayan accused the NDA government of ignoring the state’s fervent appeals for help to mitigate the sufferings of the people on several occasions.

“After Cyclone Ockhi left a trail of devastation (in early 2018), we had sought a relief package of Rs 7,340 crore. But they gave just Rs 133 crore and even deducted Rs 21.30 crore from that,” the chief minister said.

“The Sangh parivar is one organisation that made no contribution to Kerala and its development. They only tried to destroy all that we stand for.”