The President's office has asked the human resource development ministry about the progress in implementing an appointment it had cleared more than a year ago. 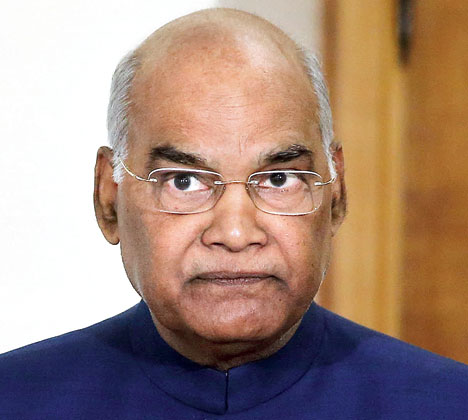 New Delhi: The President's office has asked the human resource development ministry about the progress in implementing an appointment it had cleared more than a year ago.

The office of the President of India Ram Nath Kovind has sought a response from the ministry, headed by Prakash Javadekar, on the progress in the appointment of nuclear scientist Anil Kakodkar as the chairman of IIT Roorkee.

Two government officials told The Telegraph that an officer on special duty in the President's office, P. Praveen Siddharth, had last month sent the letter to the HRD ministry.

In the first week of July 2017, the then President Pranab Mukherjee had cleared a proposal from the HRD ministry to appoint Kakodkar. Javadekar's ministry had also taken the consent of Kakodkar before proposing his name for the position in the IIT.

However, the HRD ministry has not issued the appointment letter till now.

"The matter is receiving attention in the office of HRM (HRD minister) for due consultation. Further queries can be posed to the HRM's office," higher education secretary R. Subrahmanyam told The Telegraph in response to an email sent to the ministry's information officer.

"The minister is sitting for an indefinite period on the approval, thereby nullifying the approval by the President of India. This is a gross violation of norms and propriety and the legality. Once approval is given by the highest office of the Republic, it is a command which has to be executed. If that is not done, it is disrespect to the head of the state," Sahu said.

But in IIT Roorkee's case, the President's office has not been informed of non-implementation of the approval. Once the President gives the approval, the ministry usually takes one or two days to issue the order.

Kakodkar had resigned from the post of chairman of IIT Bombay in 2015 following a tiff with then HRD minister Smriti Irani over the selection of the directors of a few IITs.

The post of the chairman of IIT Roorkee was vacant after Ashok Misra ended his tenure early 2017.

Chairperson positions in 10 IITs are lying vacant now. They include IIT Gandhinagar, IIT Palakkad, IIT Bhilai, IIT Goa, IIT Tirupati, IIT Jammu and IIT Dharwad. IIT Gandhinagar chairman post is vacant for the past four years. In these IITs, the director takes care of the responsibilities of the chairman.

The chairman of an IIT chairs the meeting of the board of governors which takes broad decisions for the institute.

In an interview to NDTV in November 2015, Irani had claimed that Kakodkar had tried to push "his own candidate" for an IIT director. Kakodkar was heading the search-cum-selection panel for the posts of directors of IIT Patna, Bhubaneswar and Ropar. Kakodkar has described the allegations as "false".