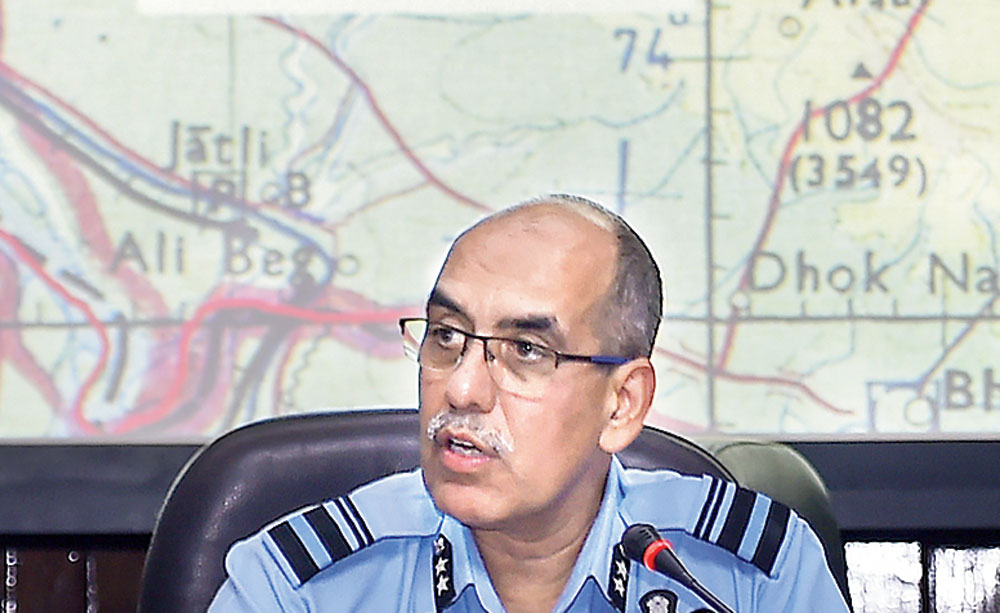 The Indian Air Force on Monday reiterated that it had shot down a Pakistani F-16 during the February 27 dogfight along the Line of Control, showing the media radar images as “irrefutable evidence of… the fact” that Pakistan has contested.

The assertion has come in the wake of an article that appeared last week in the reputable American magazine Foreign Policy contesting India’s claims.

The article quoted two unnamed American defence officials as saying that all the F-16s the US had given to Pakistan had been accounted for after a count.

Pentagon is reported to have said it was not aware of any audit of Pakistan’s F-16s after the report rekindled speculation about what happened during the dogfight.

Air Vice-Marshal R.G. Kapoor on Monday briefed mediapersons with slides of graphic captures from the airborne warning and control system (AWACS). “The IAF has irrefutable evidence of not only the fact that F-16 was used by PAF (Pakistan Air Force) on February 27, 2019, but also that an IAF MiG21 Bison shot down a PAF F-16,” Kapoor said.

All PAF aircraft, he said, had been identified by electronic signature.

Kapoor said Wing Commander Abhinandan Varthaman shot down one F-16, which fell across the LoC in Pakistan-occupied Kashmir, before he had to eject from his MiG21 Bison and ended up on the other side, adding that eyewitness accounts had also backed up the radar imagery.

“The Indian Army posts in the vicinity of the LoC in the Jhangar sector (under Nowshera Brigade) visually sighted two separate parachutes. The first sighting was due west, in general area Sabzkot, and the second was after a few minutes, southwest, general area Tandar. The two areas are approximately 8-10 km apart.”

This, according to the air vice-marshal, has been further “corroborated by radio communications intercepts of Pakistan Army formations in the area which categorically state the capture of at least two pilots, one of them being Wg Cdr Abhinandan and a second one being admitted to (Pakistan’s) CMH (Central Military Hospital)”.

He also referred to initial statements coming out of the Inter-Services Public Relations — the publicity arm of Pakistan’s armed forces — claiming that they had got three pilots. That figure had changed to two after some time after which the DG, ISPR, clarified that they had one Indian pilot.

Prior to this clarification, even Pakistan Prime Minister Imran Khan had said in a televised address to the nation that Pakistan had more than one pilot in its custody.

Kapoor said the IAF had more credible information and evidence that the PAF lost an F-16 in the dogfight but was unable to put it out in the public domain because of security and confidentiality concerns.

“What has been stated here today is sufficient to prove the fact that PAF lost an F-16 on February 27, 2019,’’ he said, signing off and refusing to field any questions.

Apart from the strategic and political significance of inflicting damage to Pakistan, India has been steadfast on this issue because New Delhi believes that the PAF used the F-16 in the dogfight in violation of the end-user agreement signed at the time Washington had sold the jets to Islamabad.

While Pakistan has been using F-16s since the 1980s, the latest batch were procured for the global war on terror with the condition that they would be used only in self-defence and not in an attack formation.

The dogfight of February 27 began with a PAF bid to conduct an aerial strike inside Indian territory in reaction India’s Balakot strike the previous day.