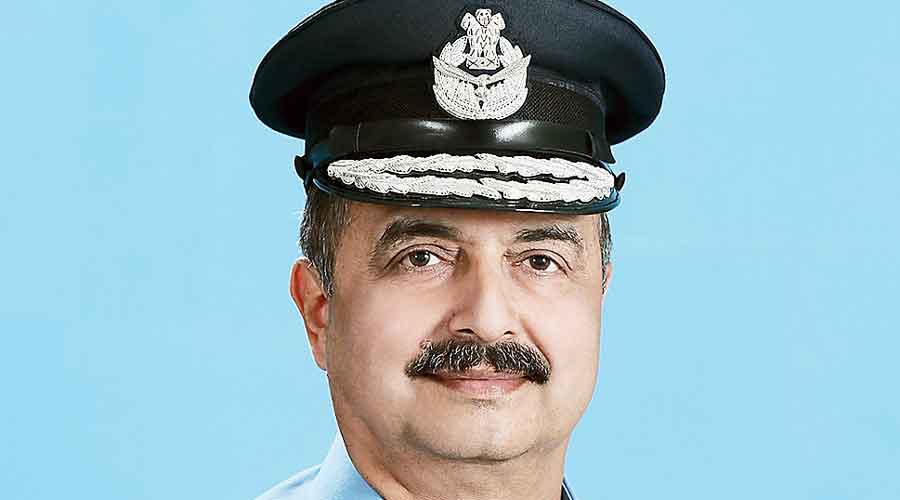 Indian Air Force chief Air Chief Marshal V.R. Chaudhari on Saturday arrived in Ladakh to visit forward areas and review the operational preparedness of troops, amid the Chinese army’s massive build-up across the Line of Actual Control in the region and its unwillingness to disengage from Indian territory.

The IAF chief’s visit comes against the backdrop of the 13th round of military talks between the Indian and Chinese armies on Sunday that failed to achieve any breakthrough. In separate statements, both sides had blamed each other for the failure of the talks.

Sources in the defence ministry said the IAF chief would during his stay in Ladakh review the security situation and operational readiness along the China frontier.

“He will visit some forward areas and will be briefed by senior IAF officials and commanders on the ground situation at the multiple friction points in eastern Ladakh where the Chinese army has been occupying Indian territories since last year,” a defence ministry official said.

A day after the military talks, India’s defence ministry had in a statement said the Chinese army was “not agreeable” to withdrawing from India-claimed territory at the remaining friction points in eastern Ladakh. The ministry said the Indian side had “made constructive suggestions for resolving the remaining areas but the Chinese side was not agreeable and also could not provide any forward-looking proposals”.

The meeting thus did not result in resolution of the remaining areas”.

The Chinese military had hit out at India for making “unreasonable and unrealistic demands, which added difficulties to the negotiations”.

India and China have been locked in a border standoff at multiple points in eastern Ladakh since May 5 last year. The Chinese are estimated to have taken over close to 1,000sqkm of India-claimed territory.

So far, the Chinese have disengaged “partially” from the Galwan Valley, the Pangong Lake and Gogra while remaining well within India-claimed lines, but have refused to leave the Depsang Plains and Hot Springs.

Earlier this month, Indian Army chief General M.M. Naravane had sounded an alert on heavy Chinese troop build-up across the eastern Ladakh border, including in forward areas. Days later, Air Chief Marshal Chaudhari had said China had deployed its air force in three Tibetan bases across the LAC from Ladakh but added that the IAF was fully prepared for any eventuality.

Sources in the security establishment said the Chinese army appeared “adamant” about not restoring the status quo of April 2020 during the latest round of military talks.

A security official said India’s military preparedness along the China frontier was being reviewed regularly. India has carried out mirror deployment at the LAC to match the Chinese, moving in additional troops, artillery and infantry combat vehicles, and is conducting regular aerial surveillance.