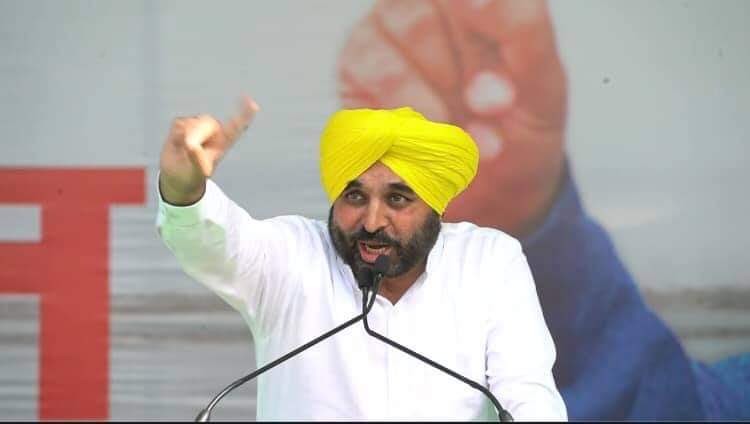 With the ruling AAP suffering a shock defeat in the Sangrur Lok Sabha bypoll on Sunday, Punjab Chief Minister Bhagwant Mann said he humbly accepted the verdict of the people and asserted that he will continue to work harder for progress and prosperity of the state.

AAP senior leader Malvinder Singh Kang said the low voter turnout was a major reason behind the defeat of the party's candidate in the by-election.

AAP's rivals, including the Congress and the BJP, also said they accept the people's mandate. However, they trained guns at the ruling party for facing defeat in its pocket borough and a first major electoral setback within three months after securing a landslide victory in the Punjab assembly polls.

"I humbly accept the verdict given by people of Sangrur. I am working day and night with honesty for the progress and prosperity of Punjab and will continue to work harder I am your son and will spare no effort to brighten the future of your families," Chief Minister Mann tweeted after the poll outcome.

Kang said the party is taking the result of the Sangrur by-election very seriously and will go into details of it.

At the same time, he cited the low turnout in the bypoll as a major reason for the AAP's defeat, according to a party statement.

Kang said a large chunk of people did not cast their votes amid the ongoing paddy sowing season and extreme heat in Sangrur.

The Sangrur Lok Sabha bypoll had witnessed a low turnout of 45.30 per cent as against 72.44 per cent polling in the 2019 Lok Sabha elections.

"We will learn from this election and will work more industriously for the welfare of people. We will come back strongly," Kang said.

"AAP's vote share in this election has only reduced by 2 percent compared to the 2019 Lok Sabha elections. While Shiromani Akali Dal, Congress and BJP candidates have even failed to secure their security deposits in the Sangrur by-election," he claimed.

"While AAP retained its vote share with a meagre fall from 37 percent to 35 percent, all other parties INC, SAD & BJP lost deposits! Vote share: SAD from 24 percent to 6 percent, INC from 27 percent to 11 percent. Others loss became Simranjit Mann's gain," Chadha tweeted.

Senior Congress leader Partap Singh Bajwa, who is the Leader of the Opposition, said, The emphatic setback to Bhagwant Mann & the @AAP in Punjab from their pocket borough of Sangrur is a reminder that Public Relations (PR) can never be a substitute to good governance.

"The Sangrur parliamentary seat is the home constituency of the Chief Minister, Finance Minister and the Education Minister," Bajwa tweeted.

While congratulating Simranjit Singh Mann for his victory in the bypoll, Punjab BJP president and MLA Ashwani Sharma said people gave their verdict and rejected the ruling party in the state, where law and order situation has deteriorated.

Kang said the AAP's vote share in the by-election reduced only by 2 percent compared to the 2019 Lok Sabha elections.

AAP got 34.65 percent of the votes, while the BJP got only 9 percent, Congress 11 percent and the Akali Dal 6 percent total share of votes in this polling. The Congress' vote share was 27 percent in the 2019 Lok Sabha, Shiromani Akali Dal had got 24 percent of the votes in 2019, which indicates that the public is no longer with the traditional parties," he claimed.

Stating that the party is not afraid of defeats, Kang said, "We will continue to work for the welfare of the people. The party has seen many such defeats in the past. In the 2014 Lok Sabha elections, we did not get a single seat in Delhi, but in the 2015 Delhi Assembly elections, we formed the government by winning 67 out of 70 seats."

"My congratulations to Simranjit Singh Mann Ji for his victory. I am sure he would keep raising Punjab's voice in his new role. The result reflects displeasure of public with @AamAadmiParty insensitive & inept governance," Warring tweeted.

SAD chief Sukhbir Singh Badal said, "I sincerely and whole heartedly congratulate Sardar Simranjit Singh Mann and his party on their electoral victory in Sangrur parliamentary by poll and offer them our best wishes and cooperation. We bow before the mandate of the people in true democratic spirit.

In another tweet, Congress' Bajwa said the electoral defeat of the AAP government in the bypoll within a short period three months from the assembly elections "is a testament of their mis-governance and hollow promises".

"This is a message from Punjab to @ArvindKejriwal and @raghav_chadha to stop their politics of remote controlling Punjab and treating it like their colony to subserve their personal interests," he said.

Mann to resign as MP today