Concertina In Our Souls 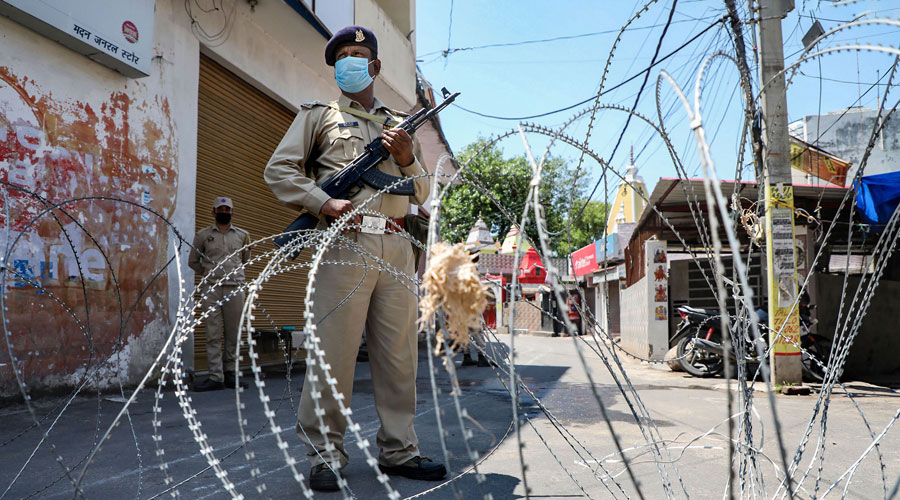 For several months a complete siege was laid across the Valley; All civil liberties were suspended in the name of democracy and development.
PTI
Gowhar Geelani   |   Published 02.08.20, 12:51 AM

The dawn of August 5 last year arrived like a betrayer for the so-called mainstream political players of Kashmir. They have since been feeling jilted as lovers do in unrequited love. They feel cheated too, as decisions about the region’s political future, its geography and landscape, and the peoples’ identity were taken without consent. The aim behind the August 5 move, they believe, was to manufacture consent by the use of force. Aggression and siege were the tools deployed to seal Kashmir’s fate.

For key political formations across the ideological divide active in Kashmir for the last seven decades, the issue of Kashmir has essentially remained political. All political groups — pro-India, pro-independence or the pro-Pakistan camps — favour a political and peaceful resolution to the dispute. Most of them invoke the United Nations Security Council Resolutions on Kashmir while others either bat for tripartite negotiations involving Pakistan or seek a solution within the framework of the Indian Constitution.

In short, all of them continue to view Kashmir as a political problem which needs a just solution. Of course, they differ on the contours of any possible solution. However, what happened on August 5 last year, has radically altered the ground and changed the restive region’s political landscape. Now the Kashmir issue is more about ideology, identity, demography, domicile, dignity, and its very existence and survival. In today’s Kashmir, politicians, people and the pulpit have been silenced alike.

Pro-India politicians in Kashmir argue that by taking a “unilateral, illegal and unconstitutional” decision to rescind Jammu and Kashmir’s semi-autonomous status and to bifurcate the state into two federally-administered territories, the Hindu nationalist Bharatiya Janata Party (BJP) has “killed the mainstream” in a single stroke. Unionists are often wrongly referred to as “mainstream” by large sections of Indian media when the fact remains that they represent a fringe as far as the popular political sentiment in the Valley is concerned.

To put it mildly, the August 5 decision was a blow to Kashmir’s collective sense of pride. Perhaps it was also aimed at instilling a sense of permanent psychological defeat in the hearts and minds of the populace. It was a decision that has resulted in collective disempowerment and humiliation. A series of actions that followed only ended up serving rounds of insult to telegraph a message that J&K’s relationship with New Delhi was no longer “complicated”. It is a relationship where a Kashmiri politician and Kashmiris are the “subjects” and New Delhi is the “ruler”. It’s as simple as that.

A year has passed since the reading down of Articles 370 and 35 A. The only perceptible development to have taken place during that period has been the absence of politics. Politicians who believed that a democratic solution to the political question of Kashmir was possible within the ambit of the Indian Constitution are either in a state of shock or in mourning. With Jammu and Kashmir’s constitutional guarantees gone with the wind, regional players like the National Conference (NC) and the People’s Democratic Party (PDP) are feeling humiliated, insulted and betrayed. In private, they concede they are at the precipice of irrelevance.

The All Parties Hurriyat Conference (APHC) — an amalgam of various pro-independence and pro-Pakistan political groups, trade bodies, lawyers and civil society actors — was widely perceived to control, own and represent the dominant political sentiment. However, in the words of a key Kashmir watcher, the Hurriyat proved to be a “rumour” and a “non-entity” which vanished into thin air in August last year. In public perception, both the pro-azadi conglomerates as well as the pro-India camps seem to have abdicated their role and responsibility at a critical juncture.

Their defence is that the Narendra Modi government imposed unprecedented restrictions on free speech and free movement, besides imprisoning thousands of Kashmiris, including top political leaders, their workers, lawyers, civil society members and youths, virtually paralysing all. In March this year, India’s ministry of home affairs informed both houses of the Parliament that, between August 5, 2019, and February 29, 2020, it arrested “7,357 individuals” after the August 5 move in Jammu and Kashmir. On the contrary, the Jammu and Kashmir Coalition for Civil Society, a prominent human rights body based in Srinagar, estimates that the government arrested over 13,000 Kashmiris during the last one year.

After discrediting pro-India politicians, the BJP appears on a mission to create a new political elite in Kashmir. The party has invested in Altaf Bukhari, a businessman-turned-politician and a former cabinet minister. Bukhari heads the newly-created Apni Party which, in simple words, is a loose congregation of stooges and turncoats. Most of its members are PDP dissenters. They have joined the bandwagon either under coercion or due to human greed.

For several months a complete siege was laid across the Valley; its snow-capped peaks and dales and streams lay trussed. All civil liberties were suspended in the name of democracy and development. Access to all forms of communication was denied, Internet services were shut down to control counter-narratives on social media platforms. Concertina wires became the fastest growing vegetation. No one was allowed to ask why.

Primo Levi, an Italian Jew and survivor of the Holocaust, recorded the horrors of violence with an analytical sweep in his book If This Is A Man. Levi wrote of life in the Nazi death camps without anger and bitterness. At Auschwitz, he was denied water to drink. “Driven by thirst, I eyed a fine icicle outside the window, within hand’s reach. I opened the window and broke off the icicle but at once a large, heavy guard prowling outside brutally snatched it away from me. ‘Warum?’ I asked him in my poor German. ‘Hier ist kein warum’ (There is no why here), he replied, pushing me inside with a shove,” Levi noted.

Levi’s powerful depiction can so easily explain the state of hopelessness in Kashmir. Understandably then, in a state of despair, the dispossessed people of Kashmir are unhappy with Pakistan too. Some believe that the Pakistani government has limited its role to sending out eye-catching tweets, “mazmoon nigari” (article writing) and spreading awareness on the Kashmir issue like a regional NGO would do. Here’s how Kashmiris have begun to understand their lot: If Pakistan recognises that it cannot go for a war against a stronger military opponent, how can a besieged Kashmiri population, comprising a little over 10 million inhabitants, resist the Indian state with mere sentiments, slogans, stones and unending sacrifices?

In extreme fear, psychologists say, there are only three possibilities: flight, freeze and fight. In Kashmir’s case it appears that during the last one year people and politicians have been in the freeze mode. Many are uncertain how to respond. The situation in Kashmir, as of today, looks no different from what George Orwell had imagined in his epic novel, Nineteen Eighty Four. A chosen few bureaucrats and senior police officers masquerade as the region’s de facto MLAs and opinion makers. The Ministry of Love enjoys unbridled powers and The Ministry of Truth puts Joseph Goebbels to shame in propaganda. Kashmir’s economy, according to the Srinagar-based trade body, the Kashmir Chamber of Commerce, has lost Rs 40,000 crore since last August. Lakhs of youngsters associated with the IT and tourism sectors have lost jobs while many up-and-coming entrepreneurs have lost their investments.

Besides raising anxieties about changes in the demography with a newly-introduced domicile order, the Indian government has also crushed the local media in Kashmir to
a degree that the newspapers didn’t write editorials and op-eds for several months after August 5.

And when they did, they wrote on Nietzsche and Camus, the situation in far-away Congo, how to fight diabetes and what the health benefits of apricots were. They wrote on everything under the sun, but could not summon courage to write on Kashmir’s burning political affairs for fear of prosecution and losing revenue, the bulk of which comes from government advertisements.

Like the leadership crisis, the local media was also a disappointment as it failed to draw any lessons from the memoir (As Long As Sarajevo Exists) of celebrated Bosnian journalist Kemal Kurspahic, who was serving as Oslobodjene’s editor-in-chief in the late 1980s and the early 1990s. The newspaper survived the brutal years of ethnic war; its journalists successfully battled to retain control of the newspaper during Sarajevo’s encirclement by Serbian nationalist forces bent on the city’s total destruction.

Kashmir’s leading opinion writers and columnists whose writings would feature in the op-ed pages of many daily newspapers are not able to express their views. Independent opinion in Kashmir has been criminalised. A cherry-picked set of bureaucrats and senior police officers have replaced independent opinion writers. They wear ideology on their sleeves and write politically-loaded articles for various newspapers and portals based in Delhi. They are Kashmir’s de facto political commentators post-August 5, 2019.

The newly-introduced J&K Media Policy, 2020, is the proverbial final nail in the coffin. Journalism has been killed. The policy grants unbridled powers to a clerk or a bureaucrat in Department of Information and Public Relations, the PR arm of the J&K administration, to declare any editor, newspaper proprietor or journalist guilty of putting out “unethical, anti-national, seditious, and fake” content and then initiate legal action. Already dozens of journalists have been summoned, interrogated at various police stations for normal reporting; cases under the stringent Unlawful Activities (Prevention) Act and various sections of Indian Penal Code have been registered against at least six prominent Kashmiri journalists. This is the cost a journalist has to pay for reporting our ground reality.

The BJP’s ideological and civilisational motives can be well understood from the kind of symbolism and importance the saffron party is attaching to August 5 as a day of “Hindu conquest”; August 5, the day Kashmir was put under the guillotine last year, is the day Prime Minister Narendra Modi would be attending the “bhoomi pujan” of the temple site in Ayodhya.

Geelani is a Srinagar-based journalist and author of Kashmir: Rage and Reason

The abrogation of Article 370 has backfired horribly