Advertisement
Home / India / How Covid numbers were hushed up

How Covid numbers were hushed up 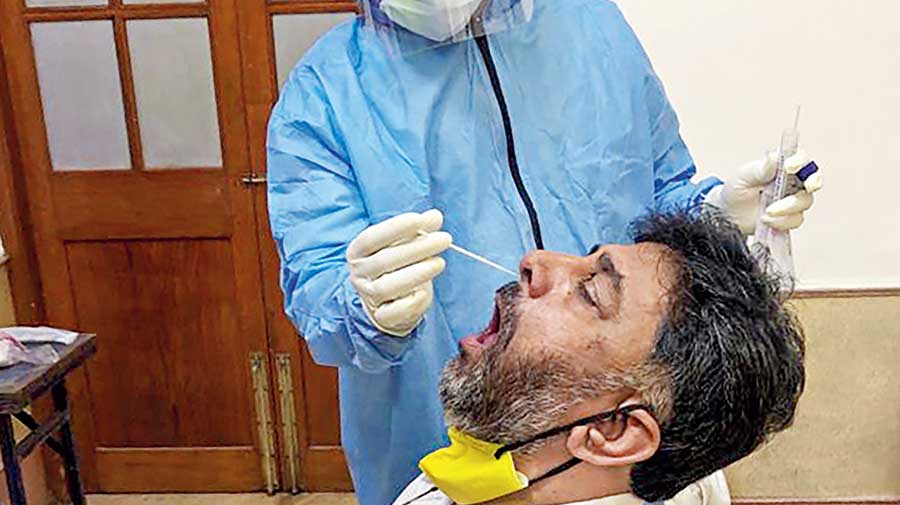 Researchers acting under government orders expunged from a scientific paper the prevalence rates of the new coronavirus infection in containment zones or hotspots in 10 cities, estimated through a nationwide survey, authoritative sources have said.

The head of India’s health research agency, Balram Bhargava, had asked the researchers to remove the infection prevalence data from the 10 cities’ hotspots they had included in their paper, multiple people familiar with these events have told The Telegraph.

Bhargava, director-general of the Indian Council of Medical Research (ICMR) and health research department secretary, told the researchers that the council did not have approval to publish the findings from the hotspots, the sources said.

They said the ICMR chief — himself a co-author of the paper — did not specify who had disapproved the publication or why.

This newspaper spoke to seven of the 74 co-authors. Four of them spoke on the condition of anonymity while three spoke on record.

“We were told: remove the hotspots data or don’t publish,” one co-author said. Two other co-authors corroborated this account.

The Telegraph sent a questionnaire to Bhargava on Friday, detailing the information conveyed by the co-authors and requesting his comment by Saturday afternoon. On Saturday, three more messages were sent to Bhargava but there was no response till night. The newspaper will publish Bhargava’s comments when he replies.

The survey to determine what proportions of people the coronavirus had infected used randomly selected blood samples from 400 people in each of 70 districts and 500 people from hotspots in each of 10 cities — Ahmedabad, Bhopal, Calcutta, Delhi, Hyderabad, Indore, Jaipur, Mumbai, Pune and Surat.

The survey, conducted by the council and collaborating institutions between May 11 and June 4, sought to estimate infection prevalence rates in early May.

Under Bhargava’s directive, the researchers omitted from their paper the relatively high prevalence rates found in the hotspots — for instance, 36 per cent in Dharavi, Mumbai; 48 per cent in Ahmedabad; 30 per cent in Calcutta.

Their paper, published this month in the Indian Journal of Medical Research, described only the lower prevalence rates in the other districts —ranging from 0.62 per cent to 1.03 per cent — and a national average of 0.73 per cent in early May.

The order blocking public disclosure of the high prevalence rates in the hotspots has raised concerns among experts about extraneous influences on science and a breach of research ethics by the council, the very agency tasked with writing medical ethics codes for India.

Samiran Panda, head of the council’s epidemiology division and a co-author of the paper, said the survey could be viewed as containing two components — the district survey aimed at estimating prevalence in the general population and the hotspot survey focused on high transmission areas.

Panda said independent surveys in cities such as Delhi, Mumbai and Pune showing similarly high prevalence rates had diminished the relevance of the containment zones’ results from early May.

Bhargava, outlining preliminary findings of the survey in June, had said the 0.73 per cent prevalence implied the lockdown and containment efforts had been “successful” in keeping the prevalence low and preventing any rapid spread.

Six among the 74 co-authors of the scientific paper have told this newspaper that they cannot explain why they were asked to expunge the data from hotspots, especially because subsequent surveys revealed comparable prevalence rates in several cities.

“The pursuit of science is to look for the truth — suppressing research is illogical,” said Jayaprakash Muliyil, a co-author and former head of community medicine at the Christian Medical College, Vellore, and a member of the council’s epidemiology and surveillance group for the coronavirus disease. The researchers tried to publish the full findings but found themselves stonewalled.

The co-author, who disclosed they were told to “remove the hotspots data or don’t publish”, said the ultimatum had triggered a debate among them over whether to publish an incomplete paper or drop the publication in protest. “We decided to publish anyway,” the co-author said.

Medical ethics experts view the council’s directive to alter the paper’s content as tantamount to cherry picking — deleting data that is inconvenient — and a violation of its own rules on research integrity.

The council’s 2019 Policy on Research Integrity and Publication Ethics specifies: “Completed research irrespective of results must be published and shared on public databases such as the Clinical Trials Research India, institute websites or other available relevant platforms.”

Amar Jesani, a physician and editor of the Indian Journal of Medical Ethics, said: “Keeping selective data out of the results distorts the paper’s analysis — this is a violation of research integrity.”

Jesani and others have underlined that collecting blood samples from volunteers after informed consent and then failing to publishing the results too represents a violation of ethics.

“These 5,000 people would have volunteered to give their blood samples because they believed the analysis would benefit science or society. Eliminating their data without good reason is troubling,” Jesani said.

Anant Bhan, an independent bioethics specialist and adjunct faculty member at the Yenepoya Medical College, Mangalore, said the removal of data from the hotspots would also constitute a “wasted research effort” through public funds.

“Research findings, no matter what they are, need to be disseminated honestly all the time — and absolutely during a pandemic,” Bhan said.

Independent health experts tracking India’s response to the Covid-19 pandemic said the directive to conceal high prevalence data in cities in early May may have been part of efforts to portray the lockdown as a success.

“The abrupt nationwide lockdown with a four-hour notice had brought misery and tragedies to many,” said a senior physician at the All India Institute of Medical Sciences, New Delhi, who requested anonymity. “The country’s health research community has been used to portray the lockdown as a success.”

The professor added: “India was under complete lockdown during April and May — a paper reporting 30 or 48 per cent prevalence rates in early May would have put a question mark on the claims about a successful lockdown and containment.”

D.C.S. Reddy, a senior community medicine specialist, co-author of the paper and member of the council’s research group on epidemiology and surveillance, said the district-level data by themselves had shown “how big and widespread the infection has become”.

“But containment-zone data from the city hotspots was considered important to understand the dynamics of transmission in areas with large infections,” Reddy said.

“As members of the surveillance group, we cannot say why the data was held back. The council can answer that.”

The omission of the hotspot data marks a fresh instance of government representatives directing researchers to alter a scientific paper. In April this year, health officials had blocked publication of the names of the 36 districts where researchers had detected evidence of community transmission.