'It was Congress that divided India on religious lines, not us' 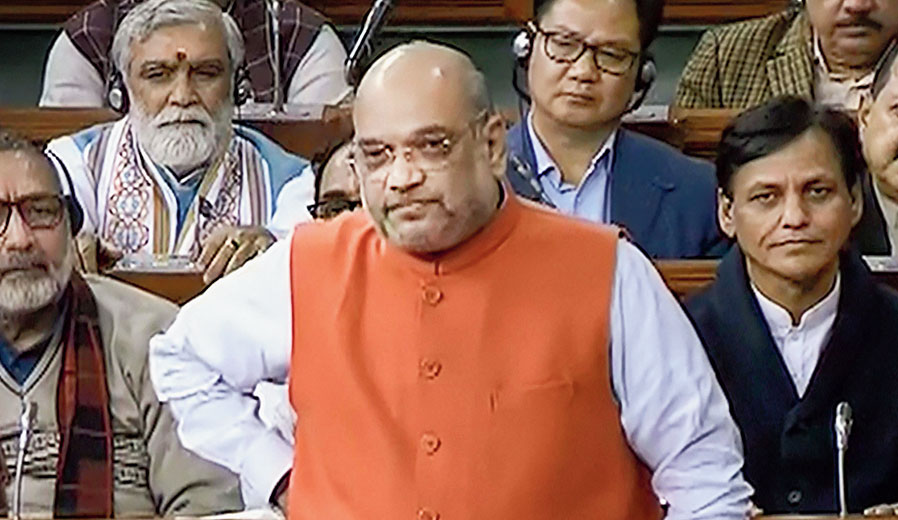 Home minister Amit Shah on Monday piloted the Citizenship (Amendment) Bill in the Lok Sabha with the contention that the legislation would not have been necessary had the Congress not divided the country on religious lines.

“You want to know why this bill is necessary? If the Congress had not divided this country on the basis of religion, there would be no need to bring in this bill. It was the Congress that divided the country on religious lines, not us,” Shah thundered in the House.

The Opposition protested vociferously, but their voices were drowned out by the treasury benches’ desk-thumping.

Shah’s claim on the Partition flies in the face of known facts, and the strongest rebuttal came outside the House from Sudheendra Kulkarni, an aide to L.K. Advani who had nurtured the current crop of BJP leaders.

Kulkarni tweeted: “In the history of Parliament, rarely have we heard a senior minister speak such a WHITE LIE to defend a black law! The Congress did NOT do, nor accept, Partition on the basis of religion. Muslim League did. The Congress remained committed to India as a secular nation. The BJP has not.”

Attaching Shah’s statement, historian S. Irfan Habib also tweeted: “You say such things on the floor of the House because you never ever cared to read or understand history based on facts.”

Another historian, S. Raghavan, quoted from Ram Manohar Lohia’s book Guilty Men of India’s Partition and tweeted: “Let there be no doubt about it. Those who have shouted loudest about Akhand Bharat, the present Jana Sangh and its predecessors of the curiously un-Hindu spirit of Hinduism, have helped Britain and the Muslim League partition the country.”

(After the Partition, the All-India Muslim League was disbanded. The current Indian Union Muslim League is a mainstream party that stands for the unity and integrity of the country.)

There is no denying that many leaders had talked of Hindus and Muslims constituting separate nations long before Partition, but it was Sangh parivar icon Vinayak Damodar Savarkar who had formulated the two-nation theory with the greatest clarity in his 1923 essay Hindutva, published 16 years before Mohammed Ali Jinnah proposed the same idea. The Muslim League adopted the Pakistan Resolution in Lahore on March 23, 1940.

The Congress did not support Partition, much less on religious lines, but finally gave up in the face of Jinnah’s obstinacy.

Mahatma Gandhi and Jawaharlal Nehru were frustrated with Jinnah’s irrational rigidity. Expressing his antipathy to Jinnah’s turn to communal politics, Nehru wrote in The Discovery of India on his propagation of the two-nation theory: “Why only two I do not know, for if nationality was based on religion, then there were many nations in India. Of two brothers one may be a Hindu, another a Muslim; they would belong to two different nations.”

But Savarkar, while delivering the presidential address at the 19th session of the Hindu Mahasabha in Ahmedabad in 1937, said: “As it is, there are two antagonistic nations living side by side in India. Several infantile politicians commit the serious mistake in supposing that India is already welded into a harmonious nation, or that it could be welded thus for the mere wish to do so. These, our well-meaning but unthinking friends, take their dreams for realities. That is why they are impatient of communal tangles and attribute them to communal organisations.”

Savarkar added: “But the solid fact is that the so-called communal questions are but a legacy handed down to us by centuries of cultural, religious and national antagonism between the Hindus and Moslems. When time is ripe, you can solve them; but you cannot suppress them by merely refusing recognition of them.

“It is safer to diagnose and treat deep-seated disease than to ignore it. Let us bravely face unpleasant facts as they are. India cannot be assumed today to be a unitarian and homogeneous nation, but on the contrary there are two nations in the main: the Hindus and the Moslems, in India.”

B.R. Ambedkar, one of the key architects of the Constitution, wrote: “Strange it may appear, Mr Savarkar and Mr Jinnah, instead of being opposed to each other on the one nation versus two nations issue, are in complete agreement about it. Both agree, not only agree but insist, that there are two nations in India — one the Muslim nation and the other Hindu nation.”

The Congress ran a campaign on social media the whole day, comparing BJP rule to British rule, along with facts and illustrative charts. One message posted by the party said: “There once was a power ruling India that chose to divide our people in order to maintain supremacy, that chose to loot our resources & leave the common man penniless, a power that trampled free speech & incarcerated innocent Indians. Sounds familiar?”

In the Lok Sabha, Manish Tewari of the Congress confronted Shah’s argument that the Congress was responsible for India’s Partition, saying the “two-nation theory was propagated by Savarkar”.