While the price of ordinary hilsa ranges between Rs 1,500 and Rs 2,200 per kg, the cherished hilsa from the Padma is yet to reach the Odisha market 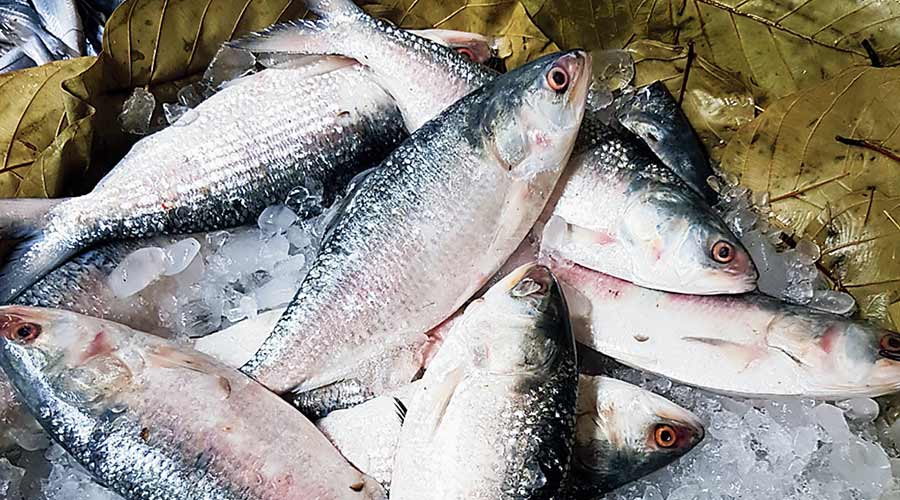 Soaring prices of hilsa, the favourite fish of the Odias, are keeping it out of many kitchens. While the price of ordinary hilsa ranges between Rs 1,500 and Rs 2,200 per kg, the cherished hilsa from the Padma is yet to reach the Odisha market.

Premier quality hilsa —which depends on the size of the fish — from Dhamra in Bhadrak was sold at Rs 3,200 per kg in the Bhubaneswar market on Friday. Hilsa is usually found in abundance at the confluence of rivers and Bay of Bengal, but have eluded fishermen so far this season.

People in the state have to wait for Padma hilsa from Bangladesh to reach Odisha markets through Bengal. Now the hilsa is coming to Bhubaneswar from Bhadrak, Balasore, Jagatsingpur, Andhra Pradesh, Mumbai and Gujarat coast.Explaining the reason behind the decline in the supply of hilsa, Bikash Chandra Das, president of Bahabalapur Trawler Association, Balasore, told The Telegraph: “The erratic rainfall during the monsoon is one of the main reasons behind the decline in the catch. Generally, the ‘purva paban’ (the wind from the east) results in mass production of hilsha on the Odisha coast. But the lack heavy rainfall accompanied by a strong wind from the east that leads to a kind of flood-like situation has led to the decline in the production of hilsa. Hilsa catch in the state had dipped by 60 to 70 per cent in the last decade.”An adult hilsa swims several kilometres from the sea to the rivers to spawn. Later, they return to the sea. The eggs hatch and juvenile hilsas flow downstream into the sea. This natural phenomenon takes place during the monsoon when the fishermen catch them in bulk.

“We have noticed shoals of fish in the deep sea. But it’s not possible to catch them in the Odisha seas from Balasore to Gopalpur in Ganjam. At Gopalpur, there is a strong current in the sea. It’s not possible to catch fish there. So we need to wait for heavy rain and not an erratic monsoon. The monsoon is about to retreat but the price of the local hilsa has not come below Rs 500.”

One of the senior officials of the fisheries department said: “Industrial waste released into rivers over the years have choked the mouth of the sea, leading to a decline in the movement of hilsa from sea to fresh water.”

He said fishermen catch abundant hilsa at the confluence of the Mahanadi and the Bay of Bengal during monsoon, particularly when it rains because of the formation of low pressure.

“But during this monsoon, erratic rainfall has resulted in low catch,” he said.Deputy director of fisheries Jagdish Chandra Panda told The Telegraph: “Change of climate, variation of temperature and the overall failure to prevent fishermen from catching juvenile fish have resulted in a drop in the cache of hilsa over the years. If juvenile fish get caught in nets, they should be released.”

Another official said: “Odisha has banned grill nets and zero mesh nests (less than half an inch in size). All the state governments and countries depending on the Bay of Bengal for fish should ban purse-seine fishing like Odisha.”Local fish vendor Garia Khan said: “As the price of the fish remains above Rs 2,000, most customers are not able to afford it. The supply is not being able to meet the demand, leading to an increase in price.”

Ganesh Biswal, another fish vendor, said: “There is a huge customer base for Padma hilsa because of its brand value and taste. Its size is bigger than that of the local hilsa. These Padma hilsa come from Bangladesh through the Calcutta market. But the supply has now almost stopped.” Many other fish traders pointed out that a few unscrupulous traders were cheating people by branding local hilsa as Padma hilsa.