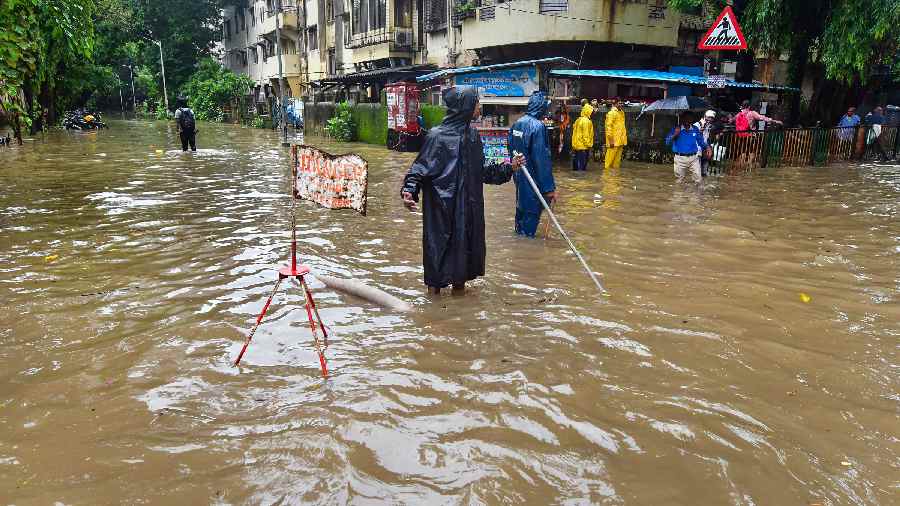 Three persons were swept away in swollen drains after heavy rains in Madhya Pradesh and Maharashtra, while the India Meteorological Department predicted a risk of flash floods in the Vidarbha region, officials said on Thursday.

"Some rivers in the Vidarbha region of Maharashtra were flooded after heavy showers and several people from Bhandara and Chandrapur were shifted to safer places," they said.

"The heavy rains also caused damage to crops and an assessment survey was on," an agriculture department official said.

In Indore city of MP, two persons were swept away in swollen drains following heavy rains and efforts were on to trace them, police said.

Chandan Nagar police station in-charge Abhay Nema said local residents informed them that a man, Zakir Khan (24), accidentally fell into a drain in Sirpur area of the city on Wednesday afternoon when he was trying to stop other people from entering the water body.

On Wednesday night, a woman, Durga Jaiswal (26), was swept away in an overflowing drain in Banganga area.

"The woman lived in a house close to the drain. While throwing garbage from the rooftop of her house, she lost balance and fell into the drain," Banganga police station in-charge Rajendra Soni said.

Efforts were on to trace the two persons, the police said.

A MeT official said the rain intensity reduced in Indore in the last 24 hours, after heavy downpour on Tuesday.

Two persons were later rescued, while efforts were on to trace the third person, he said.

In Nagpur, Regional Meteorological Centre scientist Dr Praveen Kumar told PTI that there was a "moderate risk of flash floods" in the next 24 hours in a few areas of Vidarbha districts like Nagpur, Amravati, Wardha, Gadchiroli, Gondia, Chandrapur and Yavatmal.

"Due to the low pressure system over MP, there are high chances of more rainfall which may cause flash flood conditions," he said.

The MeT office predicted heavy rains in MP and Vidarbha on Thursday and this may further induce the persistence of flash floods in the region.

Following heavy rains in Nagpur, all 16 gates of the Navegaon Khairi dam were opened, causing flooding in the Kanhan river, which choked all the intake well strainers, an official said.

There was no pumping from the Kanhan Water Treatment Plant since 3 am, affecting supply to many parts of Nagpur, he said.

In Chandrapur, some low-lying areas were flooded due to backwaters of the Wardha and Irai rivers.

A disaster management team from Nagpur went to Warora and Bhadravati tehsils in the morning to evacuate people residing near the Wardha river.

The district administration has already sounded an alert for low-lying villages located near the Wainganga river.

Some roads connecting Rajura, Ballarpur, Bamni, Warora and Wani were cut-off due to the inundation of bridges, officials said.

In Gondia and Bhandara, water entered many houses after heavy rains.

A number of families from Gaurinagar, Sanjaynagar, Pindkepaar in Gondia were shifted to safer places. A pregnant woman was rescued from Dhadri village and taken to the sub-district hospital of Tirora, an official said.

In Bhandara district, the Wainganga river has crossed the danger mark, officials said.

Collector Sandeep Kadam appealed to people to remain cautious and not to venture near the overflowing water bodies.

All 33 gates of the Gosikhurd dam were opened to release water, an official said.

In Gadchiroli, 17 traffic routes were affected due to the flooded drains and rivers, authorities said.

In Kolhapur, where the rainfall activity has somewhat decreased, the Panchganga river level at Rajaram weir was at 41.7 feet at noon on Thursday, as against the warning level of 39 feet and the danger mark of 43 feet, district disaster management cell officials said.

Four automatic gates of the upstream Radhanagari dam were opened on Wednesday, but due to the decreased rainfall activity on Thursday, only two gates were opened and water was being released at the rate of 4,456 cusec, they said.

In Mumbai, sun shone brightly in some areas on Thursday while other parts witnessed overcast sky. Most parts of the city did not witness rain in the morning.

The India Meteorological Department (IMD) has predicted moderate rain in the city and suburbs with the possibility of heavy rainfall at isolated places in the next 24 hours.

It has also forecast occasional strong winds of 40 to 50 kilometre per hour gusting up to 60 kmph.

Heavy rains were witnessed in the city on Sunday and moderate to heavy showers over the last few days.