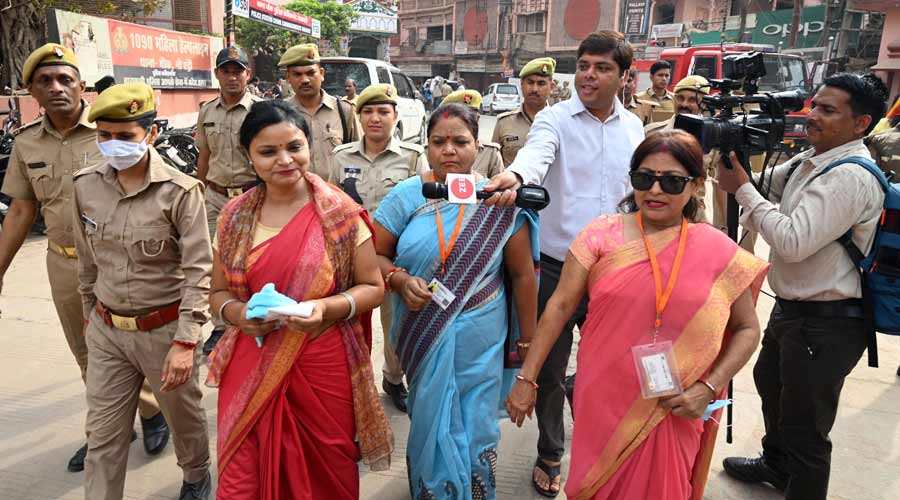 Women petitioners of the Gyanvapi Mosque survey case with police personnel during the third and last day of a videographic survey at the mosque, in Varanasi
PTI Photo
Our Bureau, PTI   |   Varanasi   |   Published 16.05.22, 04:36 PM

A local court here on Monday directed the Varanasi district administration to seal the spot in the Gyanvapi Masjid complex where a Shivling was reportedly found during a court-mandated videography survey, which concluded after three days on Monday.

Today's survey of the mosque complex, which started at 8 am, concluded at around 10:15 am.

"After working for over two hours, the court commission concluded its work on Monday at around 10.15 am. All parties were satisfied with the work," Varanasi District Magistrate Kaushal Raj Sharma told reporters here

Madan Mohan Yadav, an advocate of the Hindu side, claimed the survey team found a Shivling in the complex near 'wazookhana' (a place inside a mosque where people wash hands before offering namaaz)." Yadav said he along with senior advocate Harishankar Jain submitted an application in the court of Civil Judge Diwakar seeking that the Shivling be secured.

Elaborating on the survey, Sharma said, "On May 15, when the survey was to conclude, it was decided that the Commission's work would continue on May 16, and today after working for almost 2.15 hours, the Commission concluded its work. Till the time, a reply is filed in the court, no further work will continue. What will be the next order of the court, will be known on May 17 (Tuesday). All parties returned in a satisfied manner, and all parties followed the orders of the court".

He said gate number four of the Kashi Vishwanath Temple was closed for devotees during the Commission's work as it was used for movement of members. However, devotees were not stopped from visiting the temple.

When asked whether any sloganeering took place during the three-day survey work, Sharma said, "The 'udghosh' (slogans) which are normally raised in the Kashi Vishwanath Temple were raised, and no unusual slogans of any type were raised."

The district magistrate said the court commissioner had said that the report will be presented in the court on May 17, and till then no one should disclose what has been found inside the mosque complex.
"However, if anyone is disclosing it on his own, then its authenticity cannot be proved. Only the court is the custodian of this information. If someone had disclosed the information, then the court commission has nothing to do with it," he said.

Asked whether any survey member was debarred from the Commission's proceeding, Sharma said, "Yesterday, we got information that a member was debarred from activities of the Commission for 15-20 minutes, and subsequently was allowed to be part of the proceedings. The decision was based on the fact that he had given a significant amount of information, which is outside the confidentiality clause of the court."

Commissioner of Police of Varanasi, A Satish Ganesh said there was no law and order issue during the survey work. "On the one hand, there was deployment of security forces, while on the other hand, confidence building measures were initiated by cops. As a result, the three day work, which officially ended today, was held in an ideal atmosphere, and the law and order situation was not affected. We thank the people of Kashi, who followed arrangements made by the police and district administration," he said.

Sharma also urged mediapersons to pay attention to only official statements on the matter.

In his order on Thursday last, District Civil Judge Diwakar had turned down a plea by the mosque committee to replace Ajay Kumar Mishra, who was appointed advocate commissioner by the court to survey the Gyanvapi-Gauri Shringar complex.

The district court had said locks should be broken if the keys are not available to access certain areas of the complex for the survey. It also asked district authorities to register FIRs if the survey was not allowed.