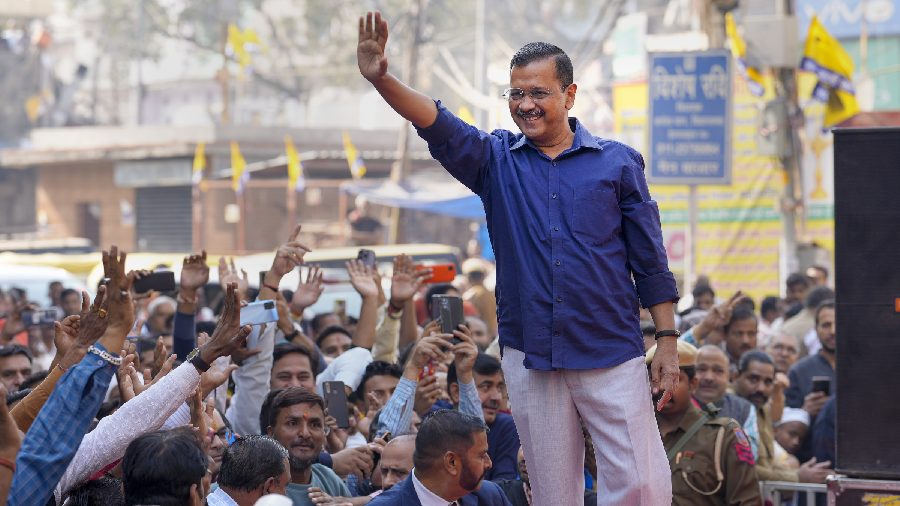 A group of people shouted slogans in support of Prime Minister Narendra Modi during Delhi Chief Minister Arvind Kejriwal’s roadshow on Sunday in Gujarat, where Assembly elections will be held next month. The incident took place at Halol in Panchmahals district in the evening, when the Aam Aadmi Party (AAP) national convener was addressing a gathering during the roadshow.

Responding to it, Kejriwal said they may shout slogans in support of whoever they want, but it is he who will build schools for their children and provide free electricity. He also said that the AAP will one day win the hearts of those raising pro-Modi slogans.

A large number of youths in the state were unemployed, he said while reiterating his party's 'guarantees' of jobs and Rs 3,000 unemployment allowance to job aspirants.

"There is no party that talks about schools. Did any party promise to build schools, hospitals and provide jobs and free electricity? It is only our party which talks about these issues," he claimed.

Kejriwal said that people may support the Bharatiya Janata Party (BJP) if they believe in hooliganism and like to hurl abuses.

"If you want to get schools constructed, come to me. I am an engineer. If you need electricity, hospitals or roads, then come to me. Else go to them for hooliganism," he said.

"I am here to ask for five years. You gave them 27 years, give me five years. If I do not deliver, I will never come to you again," he added.

The AAP is contesting all 182 seats in Gujarat for the first time in the next month's elections. The party has positioned itself as the main contender to the ruling BJP and Kejriwal has been campaigning aggressively for his candidates.

Gujarat: Gadhvi to contest from Khambhalia