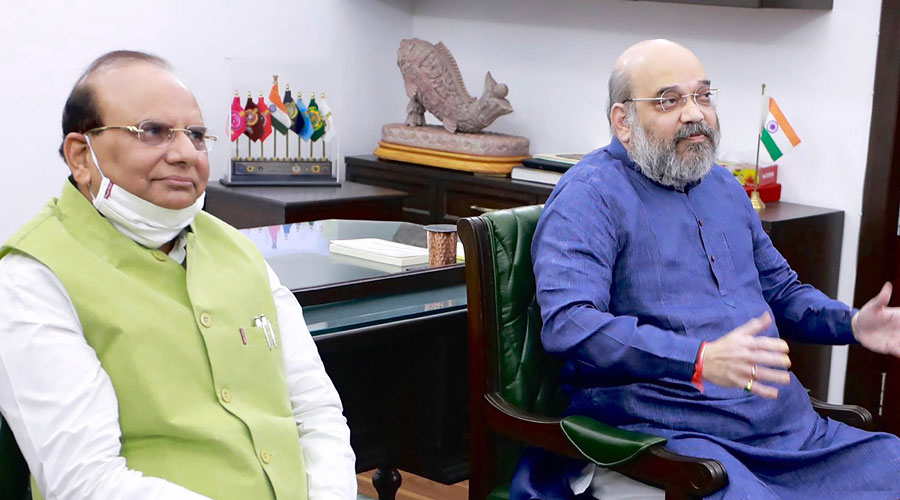 The Supreme Court on Thursday rebuffed the Gujarat government’s invocation of “internal disturbances” and “public emergency” to curb workers’ rights in Covid-19 season, ruling that the pandemic-induced economic slowdown did not amount to any such exigency.

“Even if we were to accept the respondent’s (Gujarat government’s) argument at its highest, that the pandemic has resulted in an internal disturbance, we find that the economic slowdown created by the Covid-19 pandemic does not qualify as an internal disturbance threatening the security of the state,” the bench of Justices D.Y. Chandrachud, Indu Malhotra and K.M. Joseph ruled.

It said the workers were the worst victims of the Covid-19 outbreak and that the notifications’ intent seemed to be to reduce “overhead costs of all factories” and “capitalise on the pandemic to force an already worn-down class into the chains of servitude”.

The bench directed that “overtime wages shall be paid... to all eligible workers who have been working since the issuance of the notifications”.

The April 17 and July 20 notifications, issued under Section 5 of the Factories Act, had exempted factories “from various provisions relating to weekly hours, daily hours, intervals for rest etc for adult workers” between April 20 and October 19. The Gujarat Mazdoor Sabha and another trade union had challenged the notifications.

Writing the judgment, Justice Chandrachud acknowledged that the pandemic had burdened the country’s public health infrastructure and reduced economic activities.

“However, it has not affected the security of India, or of a part of its territory, in a manner that disturbs the peace and integrity of the country,” he wrote.

“The economic hardships caused by Covid-19 certainly pose unprecedented challenges to governance. However, such challenges are to be resolved by the state governments within the domain of their functioning under the law, in coordination with the central government.

“Unless the threshold of an economic hardship is so extreme that it leads to disruption of public order and threatens the security of India or of a part of its territory, recourse cannot be taken to such emergency powers, which are to be used sparingly under the law.”

The court said that under Article 352, an internal disturbance must be of the order of an armed rebellion threatening the security of India to merit the proclamation of an emergency.

Similarly, to warrant President’s rule in a state under Article 356, the internal disturbance must be serious enough to prevent the state’s governance in accordance with the Constitution.

“The power under Section 5 of the Factories Act can be exercised in a ‘public emergency’. The explanation states that to constitute a public emergency, there must be a grave emergency. The emergency must be of such a nature as to threaten the security of India or a part of its territory,” the court said.

Justice Chandrachud said the notifications were an “affront” to the workers’ right to life and right against forced labour and legitimised their subjection to onerous working conditions at a time their feeble bargaining power stood further whittled by the pandemic.

“Clothed with exceptional powers under Section 5, the state cannot permit workers to be exploited in a manner that renders the hard-won protections of the Factories Act, 1948, illusory and the constitutional promise of social and economic democracy into paper tigers. It is ironical that this result should ensue at a time when the state must ensure their welfare,” he wrote.

“A worker’s right to life cannot be deemed contingent on the mercy of their employer or the state. The notifications, in denying humane working conditions and overtime wages provided by law, are an affront to the workers’ right to life and right against forced labour that are secured by Articles 21 and 23 of the Constitution.”

The judgment said the Indian Constitution was born out of a “transformative vision” to achieve social and economic democracy, and labour welfare was an integral part of that vision.

“The need for protecting labour welfare on one hand and combating a public health crisis occasioned by the pandemic on the other may require careful balances. But these balances must accord with the rule of law,” it said.

“It cannot be interpreted to provide a free rein for the state to eliminate provisions promoting dignity and equity in the workplace in the face of novel challenges to the state administration, unless they bear an immediate nexus to ensuring the security of the state against the gravest of threats.”

The state government had through solicitor-general Tushar Mehta argued that the pandemic was a “public emergency” as defined in Section 5, and had disturbed the “social order of the country” while threatening the even tempo of life in Gujarat.

The pandemic had caused “extreme financial exigencies” in the state and the lockdown slowed economic activities, leading to an “internal disturbance” in the state, it had said.