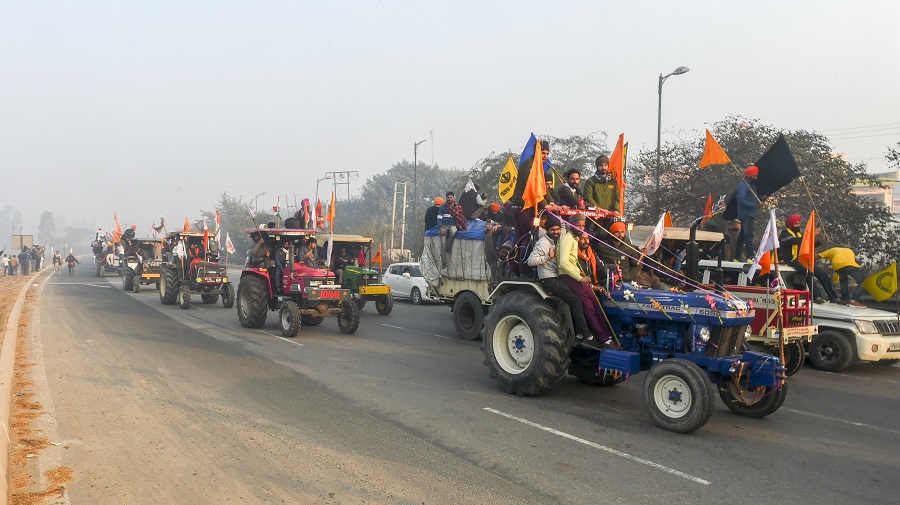 Farmers on their tractors move towards Delhi after breaking the police barricades at Singhu border during their rally on Republic Day, in New Delhi on Tuesday.
PTI
Our Bureau, Agencies   |   New Delhi   |   Published 26.01.21, 11:07 AM

Groups of protesting farmers camping at Singhu, Tikri and Ghazipur border points of the national capital broke police barricades on Tuesday morning to force their way into the city, much ahead of the time they were granted permission by Delhi Police for their tractor parade.

Tractors bearing flags could be seen, along with men and women dancing on dhols, and locals on both sides of the road showering petals on cavalcades, as security personnel tried to convince farmers to stick to the decided plan of holding the tractor parade after the conclusion of the Republic Day parade at the Rajpath.

Locals were also seen distributing food and water bottles to the protesting farmers who were part of the march.

A senior police officer who was at the spot said that a group of farmers entered the national capital after breaking the barricades.

"As per the agreement, they were supposed to start their parade at the time specified but they forcefully entered Delhi and are currently peacefully sitting at Mukarba Chowk. They are supposed to head towards Bawana side as per the route but they are adamant that they want to go towards Outer Ring Road.

"The situation is peaceful and we are trying to convince them to go towards the designated route at the specified time, he said.

On Sunday, Delhi Police had allowed the tractor rally after the annual Republic Day parade. The protesters were told they can't disrupt the celebrations at Rajpath even as the farmers insisted their parade will be "peaceful".

"But some groups of farmers did not relent and started moving towards the Outer Ring Road breaking police barricades," an official said.

A member of the Sankyukt Kisan Morcha, an umbrella body of 41 unions, leading the protest against the three central farm laws at several border points of Delhi, said those who broke the barricades belonged to the Kisan Mazdoor Sangharsh Committee.

He said the Sankyukt Kisan Morcha's tractor parade will start as scheduled after police give farmers way. The Kisan Mazdoor Sangharsh Committee on Monday announced that they would hold their march on Delhi's busy Outer Ring Road on Republic Day.

The protesting unions have also announced a foot march to Parliament on February 1, when the annual Budget is being presented, to press for their demands, including a repeal of the three new agriculture laws.

Heavy security has been deployed in view of the 'Kisan Gantantra Parade' that will move into Delhi from the Singhu, Tikri and Ghazipur border points.

Patrolling has been intensified at power substations in Delhi following a threat from the banned Sikhs for Justice outfit to disrupt the city's supply during the Republic Day celebrations.

An official said around 6,000 security personnel have been deployed to maintain vigil. Facial recognition systems have also been set up at vantage points for suspect identification, the official said.

The security personnel are keeping a hawk-eyed vigil over Rajpath, where President Ram Nath Kovind and Prime Minister Narendra Modi will be celebrating the occasion along with other dignitaries and thousands of people.

Thousands of farmers, mostly from Punjab, Haryana and western Uttar Pradesh, have been camping at several Delhi border points since November 28, demanding a complete repeal of three farm laws and a legal guarantee on minimum support price for their crops.