Home ministry 'is of the view' that the NSG should focus on handling specific tasks of counter-terrorist and anti-hijacking activities, officials said 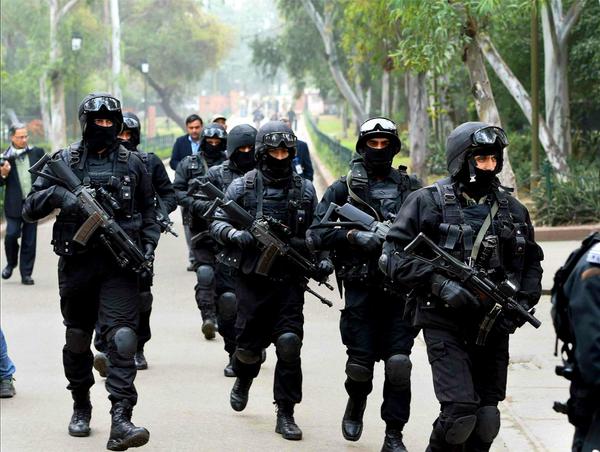 Currently, the NSG commandos provide proximate and mobile security cover under the top 'Z+' category to 13 'high-risk' VIPs that entails about two dozen personnel for each one of them.
WIkimedia Commons
PTI   |   New Delhi   |   Published 12.01.20, 10:38 AM

After effecting a major VIP security cut and withdrawal of SPG cover from the Gandhis, the Union government has now decided to completely remove NSG commandos from this task, official sources said.

This will be after over two decades that the 'black cat' commandos of the elite counter-terror force will be taken out from VIP protection duties, a task not originally charted for it when the force was conceptualised and raised in 1984.

The force provides proximate and mobile security cover commandos armed with sophisticated assault weapons under the top 'Z+' category to 13 'high-risk' VIPs that entails about two dozen personnel for each one of them.

Officials in the security establishment told PTI that the protection duties of NSG, which include giving security to defence minister Rajnath Singh and Uttar Pradesh chief minister Yogi Adityanath, will soon be transferred to paramilitary forces.

Official sources said the Union home ministry 'is of the view' that the National Security Guard (NSG) should concentrate on its original charter of handling specific tasks of counter-terrorist and anti-hijack operations and that the task of securing high-risk VIPs was proving to be a 'burden' on its limited and special capabilities.

'The NSG needs to go back to its original mandate of counter-terror and anti-hijack duties. That is the reason behind the latest move,' a senior official in the security establishment said.

The removal of VIP security duties from the NSG will result in freeing about 450 commandos, who will be used to enhance the fighting components of the force that is spread across five hubs in the country and a main garrison in Gurugram near Delhi, officials said.

As per a plan being worked out, the security of the VIPs under NSG cover could be handed over to paramilitary forces such as the CRPF and the CISF, which already provide security to about 130 prominent persons jointly.

The Central Industrial Security Force protects VIPs like NSA Ajit Doval and RSS chief Mohan Bhagwat among others, they added.

The plan to relieve NSG from VIP security tasks has been in the making since 2012 when NSG commanders foresaw an event where simultaneous terror attacks could be witnessed at one time on multiple centres in the country and the commandos will have to be rushed in different directions.

'The 26/11 Mumbai attack involved some 400 NSG commandos over three days. Considering we have multiple terror hits at one go, NSG needs to have a good number of fighting commandos and some in the strike reserves to replace them,' a senior official had then said.

After a major security review by the Modi 2.0 government in July last year, 1,300 commandos had been freed as the Centre removed or scaled down the security cover of as many as 350 politicians and former and present lawmakers.

The charter of the elite force states that it is a combat unit 'specially equipped and trained to deal with specific situations and is therefore, to be used only in exceptional circumstances to thwart serious acts of terrorism.'