A row broke out over Congress' remark on Unnao rape vicitm 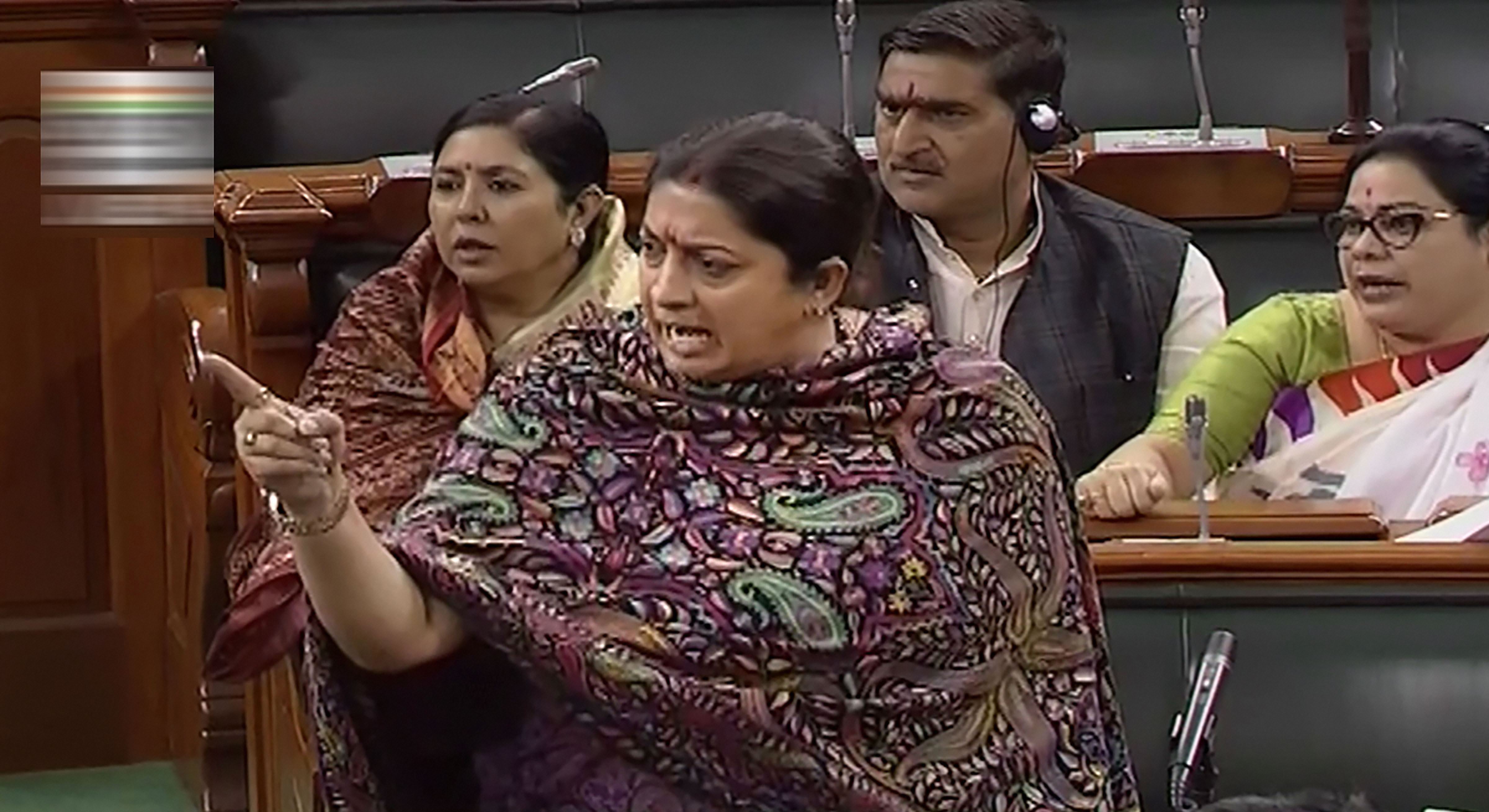 A heated debate in Lok Sabha on the burning of a rape victim in Unnao snowballed into a massive political row on Friday as the BJP accused two Congress members of showing aggression towards Union minister Smriti Irani and demanded an apology, leading to the adjournment of the House proceedings without much work.

Temperature rose in treasury benches when Congress leader Adhir Ranjan Chowdhury took a jibe at the BJP during the Zero Hour, saying 'Sita is being burnt'—a reference to the Unnao case—while plans are afoot to build a Ram temple in Ayodhya.

Uttar Pradesh has become 'adharm pradesh' (lawless state), he alleged and also referred to rapes in Malda and Hyderabad.

A few other members also spoke on the issues of sexual violence against women, rape and the early morning Hyderabad encounter before Irani, an MP from Amethi in Uttar Pradesh, launched a blistering counter attack on the Opposition, saying the Unnao matter was being 'communalised and politicised'.

She also attacked the Trinamul Congress, whose member Saugata Roy had spoken before her for not referring to a similar case in Malda in West Bengal.

'Yes, setting afire a woman is condemnable, a heinous crime. Yes, the rape and killing of a woman is inhuman, but do not politicise the issue. No one has ever communalised the issue in this House,' she said.

She also alleged that the during 'West Bengal panchayat election, rape was used as political weapon' and added that the Unnao incident was 'inhumane' and a 'brutal crime' whose perpetrators should be awarded death penalty.

As she continued with her aggressive attack on the Opposition, T. N. Prathapan and Dean Kuriakose of the Congress left their seats and entered the aisle near the Well.

They were heard shouting as they charged towards the treasury benches. Prathapan was seen rolling up his sleeve and both members were pulled back by their colleagues.

An angry Irani told the Congress members not to shout at her.

An uproar broke in the House and Union minister Prakash Javadekar sought an apology from Congress members saying treasury benches condemn their act.

Minister of state for parliamentary affairs Arjun Ram Meghwal said Irani was speaking on behalf of the government and she was interrupted.

Pointing to Irani, Gaurav Gogoi of the Congress said she was the one who made political comments and triggered the row.

'We were only seeking an explanation as to what was the government doing,' he said, adding that Irani made an attacking speech.

'We were protesting this. In the protest, we did not come to the Well of the House but protested from our seats,' Gogoi said.

Soon after this, speaker Om Birla said it was not proper to make political comments and to come to the Well of the House to threaten anyone.

Later, when the House met again after the lunch break, the government sought an apology from the two Congress members, who were not present, for their 'threatening position' towards Irani.

'This is the most condemnable behaviour. They came in threatening position when she was speaking. She is a lady member of the house. It is most uncalled for and they should apologise,' parliamentary affairs minister Pralhad Joshi said.

When the House met again, members from other parties, including BJD's Anubhav Mohanty and AAP's Bhagwant Mann, joined the BJP leaders in condemning the two Congress MPs and sought strict against them.

Several BJP members said justice for the woman minister must be ensured in Parliament.

S. S. Ahluwalia of the BJP said Congress' Chowdhury should also apologise for the behaviour of his party's members.

'Strict action must be taken against such indecency,' he said.

Joshi said the two members had deliberately not come back to the House and demanded that they either apologise or be suspended.

Prathapan was one of the two Congress members who were recently named by the speaker and not allowed to attend the House for a day for misbehaving with marshals.

Chowdhury rose to speak but Meenakshi Lekhi, who was in the Chair, expressed her unhappiness at the absence of the two members and then suspended the proceedings for the day. The House will now meet on Monday.

Speaking to reporters later, Irani expressed her shock at the behaviour of the two Congress members and asked if it was her fault that she as a woman member of the BJP spoke in the House.

'I have to see what more punishment the opposition gives to me in the House on Monday after I spoke in the interest of women,' she said.