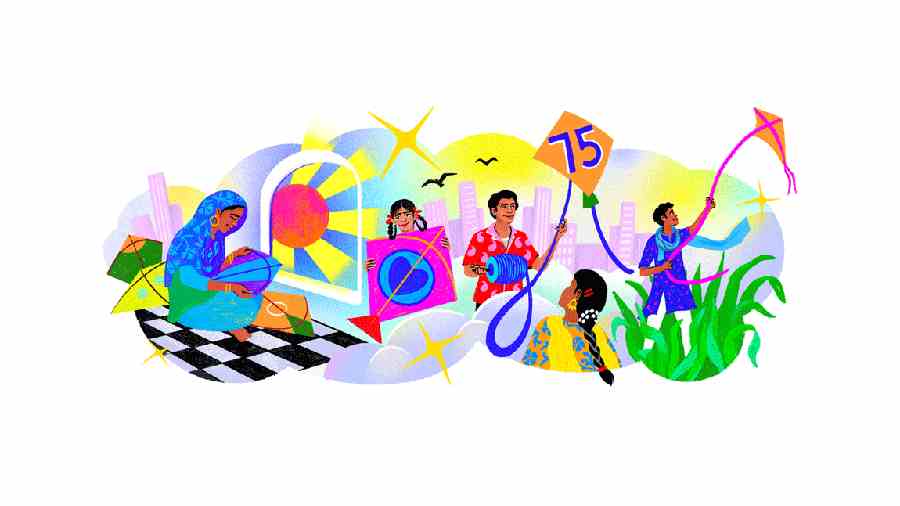 Depicting India's popular recreational sport, kite-flying, in a multi-hued artwork with an embedded metaphor, technology giant Google marked the 75th anniversary of the country's independence on Monday with a vibrant doodle.

The delectable doodle with elements of the tricolour in the kites shown follows the recent launch of the "India ki Udaan" project executed by Google Arts and Culture that celebrates the country's achievements and is "themed on the unwavering and undying spirit of India over these past 75 years".

The illustration by Kerala-based artist Neethi depicts a woman making kites and youngsters engaged in playing the traditional sport in a colourful setting, with the sun and high-rise buildings shown in the backdrop.

Google has added GIF animation to it, infusing a layer of dynamism and thus, bringing the doodle alive, as the tricolour-themed kites can be seen moving in the air.

Also, in the artwork, a young girl holds a kite with a heart sign on it, while a man looks at the flight of a kite bearing the number "75", tethered from a spool in his hand.

"On this day in 1947, India officially became a democratic country -- ending nearly two hundred years of British rule. The lengthy struggle for freedom resulted in the birth of the largest democracy in the world. Heroic freedom fighters, such as Mahatma Gandhi, led the country's independence movement through civil disobedience and nonviolent protests," Google said on its official page.

The artist said the artwork depicts the "culture around kites -- from the craft of creating bright, beautiful kites to the cheerful experience of a community coming together".

"I have drawn kites depicting our national colours, a message of love and commemorating the 75 years of India's independence. They fly as high as skyscrapers, birds and I would like to believe, the sun," she was quoted as saying about the doodle on the official page of the internet search engine.

The vast expanse of the sky brightly speckled with soaring kites is a colourful symbol of the great heights that the country has achieved, Neethi said.

The biggest annual celebration takes place at the Red Fort in Delhi, where the prime minister raises the saffron, white and green national flag in synchronisation with a 21-gun salute, Google said in a statement, adding, "People also celebrate by flying kites, a longstanding symbol of independence."

"Indian revolutionaries once flew kites with slogans to protest British rule. Since then, recreational and competitive kite flying have become one of Independence Day's most popular traditions. Indians also commemorate the day by spending time with loved ones and hosting cultural programmes in neighbourhoods and schools," it said.

Earlier this month, a senior Google official, while launching the "India ki Udaan" project, curated as part of the Azadi ka Amrit Mahotsav, had said a "very special doodle will be unveiled this year on August 15".

The vibrant online project captures the milestones India has achieved in its journey of 75 years since independence, draws from rich archives and features artistic illustrations to tell the story of the country.

A physical representation of the new digital collection was also set up at the venue on the day of the launch, with a kite-shaped digital screen, pictures with augmented reality experience and other tech-driven experiences.

Simon Rein, Senior Programme Manager, Google Arts and Culture, told PTI shortly ahead of the launch that kites have been used as an "optimistic metaphor" to describe India's journey in the 75 years as also to engage and educate the audience at home and those who are not from India but wish to learn about its journey.