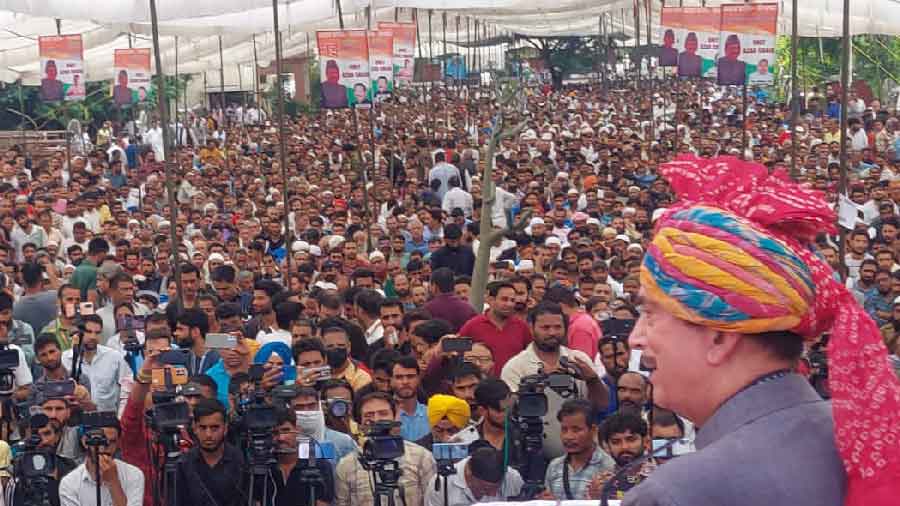 In his first rally since quitting the Congress, Ghulam Nabi Azad on Sunday spelled out the agenda of his yet-to-be-named party -- the restoration of Jammu and Kashmir's statehood, protection of land and job rights of its residents, and the return and rehabilitation of Kashmiri Pandits.

Addressing the rally at Sainik Colony on the outskirts of Jammu, the veteran leader said he would announce the name of his new party after consulting people and leaders of Jammu and Kashmir.

Azad, a former chief minister of Jammu and Kashmir, was accorded a warm welcome by his supporters who turned up in large numbers at the Jammu airport and later took him in a procession to the rally venue.

The new party will focus on the restoration Jammu and Kashmir's statehood, protection of land and jobs for its residents and the return and rehabilitation of Kashmiri Pandits, he said.

Azad, 73, ended his five-decade-long association with the Congress on August 26, terming the party "comprehensively destroyed". He also lashed out at Rahul Gandhi for "demolishing" the party's entire consultative mechanism.

'I stand with people of Jammu'