In keeping with protocol, the former army chief was accorded a 17-gun salute at his funeral where 800 service personnel were in attendance 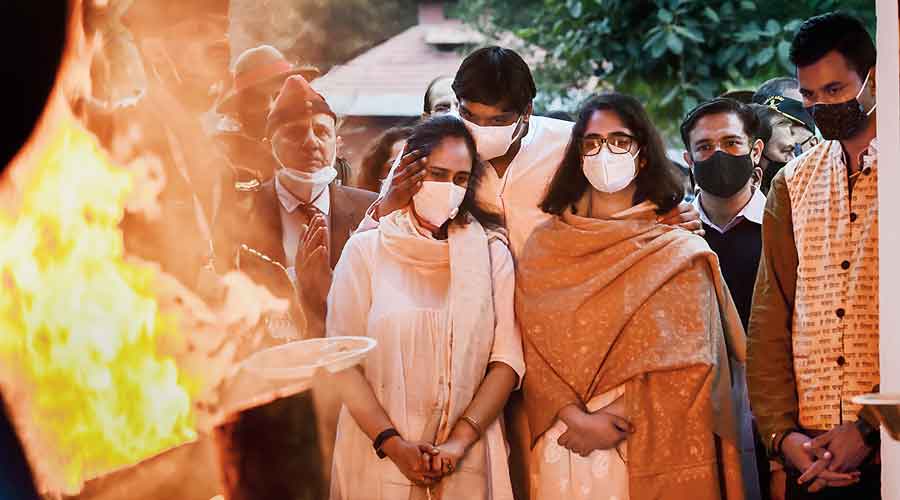 Kritika and Tarini, daughters of Gen Bipin Rawat and Madhulika Rawat, during the cremation of their parents at the Brar Square crematorium on Friday.
PTI Photo
Imran Ahmed Siddiqui   |   New Delhi   |   Published 11.12.21, 12:31 AM

General Bipin Rawat was laid to rest on Friday with full military honours at the Brar Square crematorium in Delhi cantonment.

In keeping with protocol, Gen. Rawat was accorded a 17-gun salute at his funeral where 800 service personnel were in attendance. His daughters Kritika and Tarini performed Gen. Rawat and Madhulika’s last rites.

Earlier in the day, the mortal remains of Gen. Rawat and his wife had been kept at their 3 Kamraj Marg residence before cremation to allow people to pay their respects.

The mortal remains of Gen. Rawat were carried in a casket wrapped in the Tricolour to the Brar Square crematorium. Along the way, people showered petals on the gun carriage, decorated with flowers, and raised slogans in his praise. Petals were showered and slogans raised at the crematorium too.

Geetika Lidder, wife of Brigadier L.S. Lidder, and their daughter Aashna at the officer’s funeral in New Delhi on Friday. Brigadier Lidder died in the helicopter crash in Coonoor on Wednesday with Chief of Defence Staff Bipin Rawat and 11 others. Geetika, who stood holding the Tricolour that had been draped on her husband’s coffin, kept her composure as she told a reporter: “We must give him a good farewell, a smiling send-off. I am a soldier’s wife.” But asked if she was feeling a sense of pride that he was wrapped in the Tricolour, she said: “More than pride, there is pain…. But if this is God’s will, we will have to live with it. This is not how we wanted him back, but…. He was a very good father, a very good father. My child will really miss him.” Aashna said she would live with the memories of the 17 years spent with her father, whom she described as a “hero” and her “biggest motivator”. “I am happy he did not have to suffer,” the young girl said bravely, but added: “I feel scared as I was really pampered by my father.”
PTI Photo

Brigadier Lakhbinder Singh Lidder, Gen. Rawat’s defence adviser who was among those killed, was also laid to rest with full military honours on Friday.

On Thursday evening an IAF aircraft had brought the bodies of the 13 victims from Sulur near Coimbatore to the Palam airbase in Delhi. A shradhanjali was held. Prime Minister Narendra Modi and the country’s top military brass paid homage to the dead.

Defence ministry sources said “positive identification” of only three of the charred bodies — of Gen. Rawat, Madhulika and Brig. Lidder — had been possible till now. The rest of the bodies have been kept at the mortuary of the Army Base Hospital in Delhi as the identification process continues.

The IAF has so far not commented on the cause of the crash but sources have suggested that fog or a mechanic snag could be the likeliest reason. A tri-service inquiry into the crash has been ordered and it is headed by Air Marshal Manvendra Singh, Air Officer Commanding-in-Chief of the Training Command.

“The IAF has constituted a tri-service Court of Inquiry to investigate the cause of the tragic helicopter accident on 08 Dec 21. The inquiry would be completed expeditiously & facts brought out. Till then, to respect the dignity of the deceased, uninformed speculation may be avoided,” the IAF said in a tweet on Friday.

IAF has constituted a tri-service Court of Inquiry to investigate the cause of the tragic helicopter accident on 08 Dec 21. The inquiry would be completed expeditiously & facts brought out. Till then, to respect the dignity of the deceased, uninformed speculation may be avoided.

Group Captain Varun Singh, the lone survivor of the crash, is fighting for his life at a military hospital in Bangalore. He has suffered severe burn injuries.