Gandhis not backing anyone 'directly nor indirectly' in Congress president poll race: Tharoor 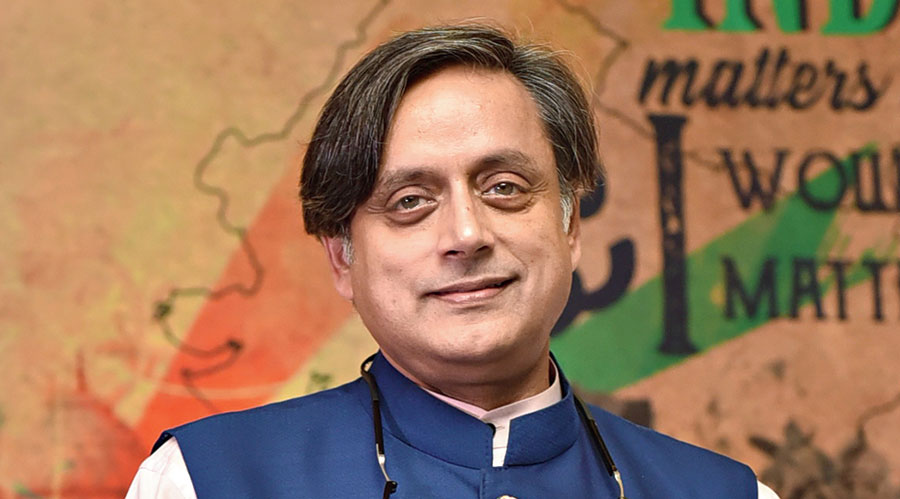 Congress presidential poll candidate Shashi Tharoor on Friday said he is aware of his underdog tag and talk of an 'official candidate' in some quarters but he has been assured by the Gandhi family repeatedly that they are "neither directly nor indirectly" backing anyone.

Tharoor, who filed his nomination papers for the top post at the AICC headquarters here, also said it is apparent that not everything about the electoral process has been ideal, but added that there is no point seeking perfection now as if one wants to play the match, one has to "bat on the available pitch".

The Thiruvananthapuram MP, however, asserted that he remains convinced of the party's commitment towards ensuring that these elections take place in a free and fair manner.

In an exclusive interview with PTI, Tharoor said he believes that a fresh leader, who has not been "jaded by being entrenched within the current system for too long", could energise the party and also appeal to more voters than the Congress managed to during the last few elections.

The 66-year-old leader also said he hopes that the Gandhi family will recognise that they are and remain the foundational pillar of the Congress, "our moral conscience and ultimate guiding spirit".

They cannot and must not withdraw from that role, whatever the formal designations they choose to retain, Tharoor said.

"To my mind, though the party presidential election is an internal exercise, it also represents an opportunity to ignite widespread public interest in the Congress and to galvanise its party workers," he said.

He said that when, following the 2019 Lok Sabha elections, Rahul Gandhi offered to resign as the party president to take accountability for the stinging defeat, he was one of the many who tried to talk him out of it.

"At the end of the day, he stuck to his decision and we must respect that. That said, the longer the Congress waits to get its act together, the greater the risk of a steady erosion of our traditional vote bank and their gravitation towards our political competitors," the former Union minister said.

"Which is why I have long been an outspoken advocate for free and transparent elections within the party, including for the post of President -- because a leader elected by the party workers will have a great advantage in addressing organisational challenges, as well as the process of rebuilding that is required to internally strengthen the rank and file of the party," Tharoor said.

He argued that such a president would have extra legitimacy in reaching out to the public for support.

In any case, "business as usual" will not lead us anywhere, he added.

Tharoor said whosoever is elected must develop and implement a roadmap that will allow the party to find a way to appeal beyond the 19 per cent of the electorate that voted for the party in both 2014 and 2019.

"The party has to appeal to those who did not vote for it in those two elections and drifted away to the BJP, most of whom did so for reasons other than Hindutva," he said.

This would require a leader who, while anchored in the history of the party, looks beyond the past to speak to the aspirations of young India -- one who firmly believes the party can set the country on the route to a better society, one that is ready to take on the opportunities offered by the world of the 21st century, Tharoor said.

"The challenge, therefore, for the Congress is two-fold: We need to both articulate a positive and aspirational vision for the nation as well as work to fix the organisational and structural deficiencies that have impeded our recent efforts," he said.

"To my mind, the answer lies in a combination of effective leadership and organisational reform," he added.

Tharoor called for re-imagining the organisational culture in the party to decentralise authority and truly empower the grassroots office-bearers of the party.

He argued that delegating powers to state leaders and empowering grassroots workers will not only free the new leader from the onerous burdens of over-administration but also help create the strong state leadership that in past eras strengthened the Congress' national appeal.

Tharoor said he took the decision to contest as it will strengthen the Congress and he has several ideas to reform and re-energise the party after the recent electoral setbacks such as decentralising authority within it, increasing consultative mechanisms and giving 'karyakartas' more access to the leadership at all levels.

Asked about the concerns raised by him and some other MPs over the fairness and transparency of polls, Tharoor said they had raised certain practical and process-related queries regarding the upcoming elections before the chairperson of the party's Central Election Authority.

He said the queries have since been addressed by Madhusudan Mistry and he appreciates the constructive manner in which the party's poll panel chief reached out personally to discuss these issues at length.

"It is apparent that not everything about the process has been ideal, but don't forget we have not had a contested election in two decades. There is no point seeking perfection now: if you want to play the match, you have to bat on the available pitch" he said.

"In some quarters it has been suggested that there will be an 'official candidate' backed by the leadership but on the contrary, it has been repeatedly stressed by Congress president Sonia Gandhi, Rahul Gandhi and Priyanka Gandhi Vadra in my conversations with them over the last two weeks that the Nehru-Gandhi family welcomes these elections, that they would like to see a diverse field of candidates contesting and are neither directly nor indirectly backing any one candidate," Tharoor said.

He said he was happy to accept their assurances and remains convinced of the commitment of the party towards ensuring that these elections take place in a free and fair manner.

"Like many other Congress workers, I am glad to move on with an election process that in my view will only strengthen the party," he added.

Asked how realistic are his chances in the polls, Tharoor said he has never contested an election without seeking to win.

"A hat trick of victories from Thiruvananthapuram, a seat won by the Left in two consecutive elections prior to my arrival will tell you that my results have so far vindicated that approach," he said.

"I appreciate that I am widely seen as the underdog in this race, and that many people believe the establishment will come together to defend their own vested interests in the status quo.

"But sometimes one must have the courage of one's convictions to do the right thing, regardless of the likely outcome," he asserted.

Asked about the crisis in the Rajasthan Congress, Tharoor said he doesn't want to comment on the developments there, especially at a time when the party president is actively engaging with all stakeholders to find a resolution.

Kharge in as 'proxy': BJP