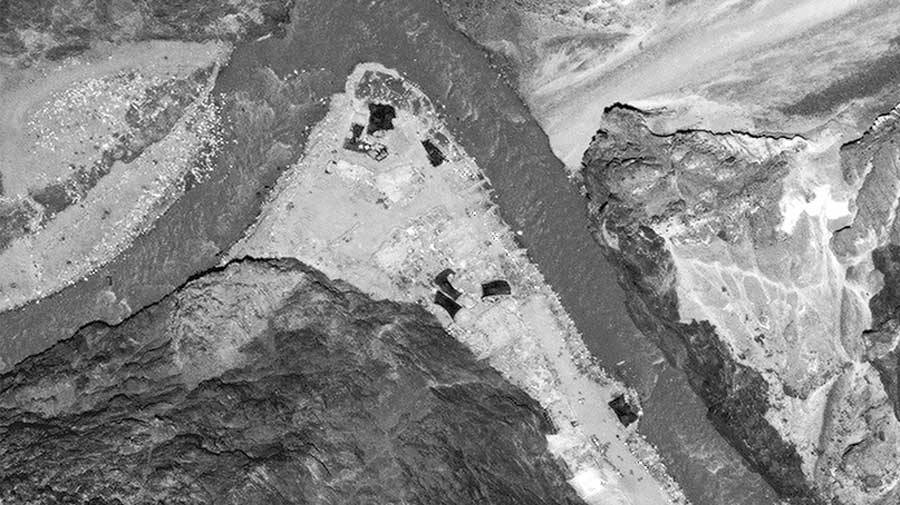 The Indian Army is treading with extreme caution on the Chinese troops’ “partial” disengagement from the India-claimed line in the Galwan Valley by creating a “buffer zone” within Indian territory.

The move is being viewed with scepticism and apprehension by some security officials and military veterans who wondered whether China is citing disengagement to push India away from the Line of Actual Control (LAC).

The Chinese People’s Liberation Army (PLA is said to have retreated 1.5km from the June 15 clash site at Patrolling Point 14 by removing temporary structures as part of the mutual agreement between the two sides.

The Indian Army is also said to have moved back the same distance by creating a buffer zone between the two armies.

This suggests there will be no patrolling by the armies of either side within the buffer zone.

Another satellite image provided by Maxar Technologies shows the Galwan Valley on July 6. The June 28 image suggests India had built a wall on its side and China had expanded an outpost camp at the end of a long road connected to military bases farther from the poorly defined border, according to experts. The July 6 image shows China and India appear to have dismantled recent constructions on both the sides.
AP

The security officials and military veterans wondered whether the Indian withdrawal by creating a buffer zone could mean that India had ceded territory to the PLA, which may have forced a de facto change in its favour. The Chinese are already in control of the heights at the Galwan Valley and Pangong Tso and therefore in a position of huge military and tactical advantage.

“We are closely watching the PLA’s moves. We are hopeful that the partial disengagement will lead to complete disengagement following the mutual agreement between the two sides. At the same time we remain extremely cautious,” said an army officer.

He said the army was constantly monitoring through drones and satellites the PLA’s movements.

A veteran questioned the move to create a buffer zone inside the India-claimed line in the Galwan Valley.

“The move to retreat from the Galwan Valley on the part of the Indian Army and subsequently agreeing to the creation of a buffer zone within its territory is wrought with serious implications. Does that mean we are giving legitimacy to China’s latest claim over the Galwan Valley?” he told The Telegraph.

With the creation of the buffer zone, a part of the area once patrolled by the Indian Army has now become out of bounds.

Another veteran asked why neither the government nor the Indian Army has so far officially given the exact specifications and contours of the mutual agreement on disengagement.

“The country wants to know whether the agreed mutual disengagement is on Chinese terms and also whether the Indian government was playing into China’s hands by agreeing to a buffer zone for disengagement to save itself from the ‘no intrusion’ statement by the Prime Minister,” he said.

The Galwan Valley, the veteran pointed out, was never disputed since 1962 and belonged to India.

“It seems China has ulterior motives and wants to expand its claim in the region by transgressing into territory where there was no dispute. They are now pressing forward to create new buffer zones with a clear design to set new limits for the Indian patrols,” the veteran said.

Sources in the defence ministry said such buffer zones were also being created as part of the mutual agreement in Hot Springs and the Pangong Lake where the troops of the two sides are eyeball-to-eyeball since the first face-off on May 5.

A ministry official said the PLA had already started disengaging from the Hot Springs area and both sides would move back 1-1.5km from the friction point. The disengagement process is likely to continue for the next few days, he said.

The real challenge is said to be at the Pangong Lake area where the Chinese troops have transgressed 8km into the Indian side of the LAC, between Finger 4 and Finger 8. The Chinese are said to have constructed infrastructure and deployed men and machines. Indian patrols had run into some hindrance, too.

Asked about the reason behind India agreeing to the buffer zones within its territory in the Galwan Valley which also amounts to losing out on its land, a defence ministry official said: “The creation of the buffer zones is only a temporary measure for a few months till the restoration of status quo ante. We are prepared for all eventualities if they go back on the agreement.”

Expressing apprehension, an Intelligence Bureau official said that by creating buffer zones, the Chinese could be trying to force India to agree to its reinterpretation of the LAC.

“This is also like changing the status quo at the Galwan Valley and other friction points. India should be wary of their hidden expansionist designs,” he said.

He did not rule out the possibility of the standoff going on for months.

The two armies are likely to hold further talks on July 9 and 10 after the disengagement process is completed.