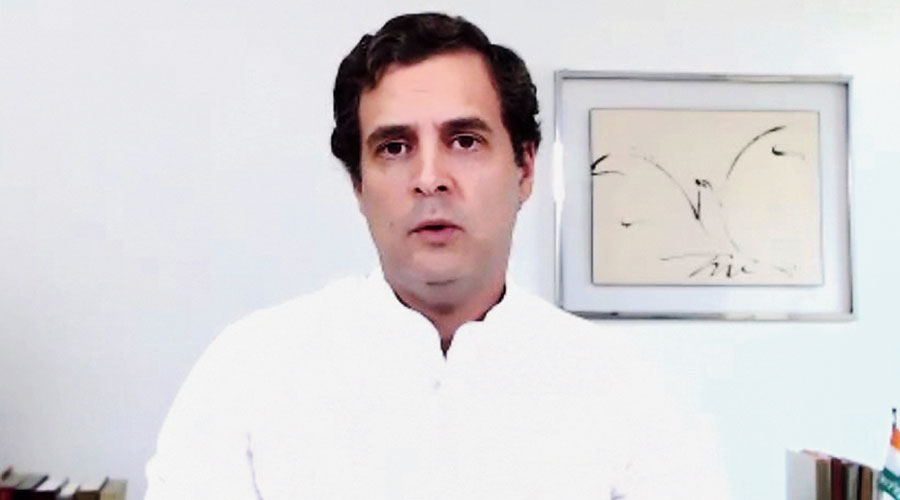 The demand to make Rahul Gandhi the Congress president was again raised on Saturday, at a meeting of the party’s Lok Sabha members that Sonia Gandhi had called to discuss the post-Covid situation.

The MPs asserted that the Narendra Modi government had proved a disaster in handling the epidemic, economy and the Chinese border intrusion, and the Congress had a responsibility to provide a credible alternative in the form of Rahul.

At least ten MPs demanded that Rahul return as president without delay.

While the party did not officially reveal what transpired at the meeting, held through videoconference, Kishanganj MP Mohammad Jawed mentioned some details to The Telegraph.

“Yes, I said Rahulji should return as party president. Most Congress workers want this and it’s my duty to convey the message to the top leadership. Many MPs supported the demand at the meeting,” he said over the phone from Bihar.

“The government has failed on all fronts. We saw how migrant workers left (on foot for home, often hundreds of miles away) without any help during the lockdown. Such a humanitarian tragedy hasn’t been heard of anywhere in the world.”

Jawed added: “Modi couldn’t offer anything except taal-thali-mombatti in the time of pandemic. The economic ruin is an additional burden. Under these circumstances, it was only Rahul Gandhi who spoke up for the people. He was the sole guiding light.”

Jawed went on: “Narendra Modi doesn’t believe in consensual politics and has, even in this crisis, resorted to unilateralism. No other leader in the Opposition chose to confront him. His stance on China was unbelievable. While the entire world knows China encroached upon Indian territory -- satellite images show the situation on the ground – Modi lied to the nation.

“His statement (of June 19 about there being no intrusion) may have dangerous consequences for the country. It was Rahul Gandhi who demonstrated the courage to bring out the truth before the nation.”

While Sonia avoided responding to the demand to make Rahul president, Rahul focused on China and the mismanagement of the Covid-19 epidemic.

Rahul said that although the Congress was not in government, it was the party’s duty to speak up for the people. He said the Prime Minister had abdicated his duty to lead with responsibility and compassion in this crisis and tried to mislead the nation with false statements.

The Congress on Saturday kicked up a storm accusing the Prime Minister of a propensity to make false statements. This was triggered by Rahul’s one-word Hindi tweet -- “Asatyagrahi” --- in the context of Modi’s claim on Friday about Rewa in Madhya Pradesh bagging Asia’s largest solar power project.

If satyagraha means “struggle for truth”, the word Rahul tweeted should mean “one who struggles for the untruth”.

The Congress has reminded Modi that Karnataka, Rajasthan and Andhra Pradesh have bigger solar power projects. While the Rewa project is of 750MW, it is outranked by the Bhadla Solar Park in Jodhpur (2,245MW), Pavagada in Karnataka (2,050MW) and the Kurnool Ultra Mega Solar Project (1,000MW).

“PM Modi’s mantra: Why work towards fixing the problems when you can lie about them,” the party tweeted.

Rahul’s aggressive intent about the Prime Minister was reflected also in his remark on the BJP’s decision to block the proposal to have Parliament’s public accounts committee (PAC) examine the PM-CARES Fund.

He tweeted: “Why is PM so scared of disclosing the names of those who donated money to him for PMCares? Everyone knows Chinese companies Huawei, Xiaomi, TikTok and OnePlus gave money. Why doesn’t he share the details?”