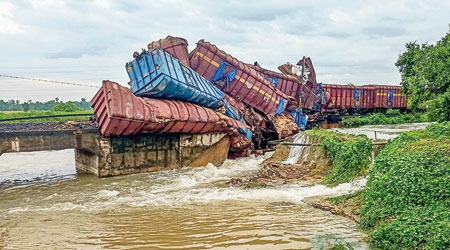 Bogies of the goods train that derailed on Tuesday on the Talcher- Angul railway section in Angul after heavy rain.
PTI
Subhashish Mohanty   |   Bhubaneswar   |   Published 15.09.21, 01:25 AM

Incessant rains triggered by a deep depression over the Bay of Bengal have claimed four lives in Odisha in the past three days. The latest casualty was a six-year-old girl who reportedly died when the wall of a house collapsed on her on Tuesday morning.

The rain has left a trail of devastation in the state. Nine coaches of a goods train were derailed and one of them fell in a rivulet in Angul-Talcher single line section around 2.30am on Tuesday. Following the derailment, several trains were diverted and 12 were cancelled. The goods train was travelling from Ferozepur to Khurda Road. Six coaches of the train were carrying wheat.

The rains have thrown normal life out of gear in large parts of the state with most of the urban areas, including smart city Bhubaneswar, Cuttack and Puri witnessing heavy water logging because of lack of a proper drainage system. The situation is likely to be worsened as the meteorological department predicting another low-pressure system over the Bay of Bengal on September 17.

In the last two days, 10 districts of Odisha received over 200mm rainfall and the highest over 500mm rainfall was reported in two blocks of Puri district. Odisha experienced a severe water logging and flood-like situation. However, the situation is still under control.

The state government has empowered the collectors to initiate steps to evacuate people from the low lying areas if the situation gets worsened. The block level officials have been asked to provide food to the distressed and displaced people.

Special Relief Commissioner P.K. Jena asked the collectors to furnish the damage assessment report within a week by September 22 positively for allotment of funds, for disbursement. Geo-tagged and time-stamped photographs of damaged houses and crop area must be taken during assessment.

Agriculture land in 28 districts except Ganjam and Sundergarh have been inundated and houses have been damaged. Livestocks have also been killed. However, the matter of relief at this point is the deep depression weakened into a depression.