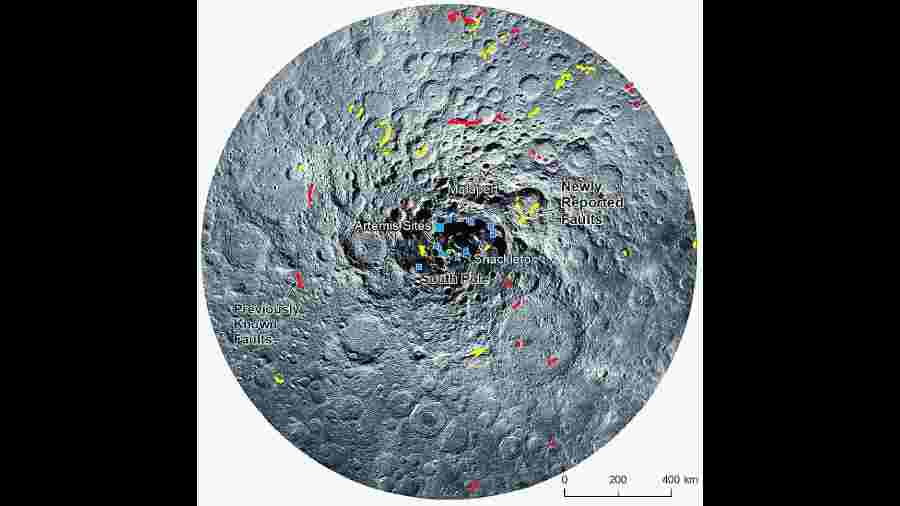 The scientists at the National Geophysical Research Institute (NGRI), Hyderabad, have also mapped the orientations and movements of the faults, providing rich tectonic details of the lunar south pole region, an area considered attractive for scientific exploration and lunar bases.

The map generated by the NGRI scientist P. Senthil Kumar and research scholar Abhishek Mishra has suggested that all 13 candidate landing sites identified by Nasa for its proposed Artemis missions are likely to be unaffected by magnitude 1 to 3 moonquakes.

But eight sites could be affected by magnitude 4 shallow moonquakes, while the other five sites near the Shackleton crater and the Malpert mountain would be seismically low-risk areas and the most suitable sites for landers or bases.

The Artemis missions will seek to establish long-term human presence on the moon for decades to come and serve as a stepping stone for sending astronauts to Mars. NASA plans to launch the twice-postponed unmanned Artemis I on September 27, send humans to orbit the moon on Artemis II no earlier than 2024, and use Artemis III to ferry humans to one of the 13 candidate landing sites no earlier than 2025.

The Indian Space Research Organisation also plans to land an unmanned spacecraft — Chandrayaan-3 — near the lunar south pole region and deploy a seismometer on the surface.

The spacecraft is expected to be launched later this year.

“Given the high interest in the lunar south pole region, we thought it would be important to map in detail and understand its tectonic features,” said Senthil Kumar, a planetary geologist who started the mapping exercise three years ago at the NGRI, a Council of Scientific and Industrial Research lab.

Under the project supported by the CSIR and Isro, Kumar and Mishra used images from the NASA Lunar Reconnaissance Orbiter spacecraft of the lunar

The NGRI study, just published in the journal Geophysical Research Letters, has identified 75 new faults, branching out into 532 segments. It has also found that most of the faults had emerged over 10 million years ago when the moon was far more seismically active than at present.

“Moonquakes continue to occur along these faults,” Senthil Kumar said. Studies through the Apollo lunar missions had identified 28 moonquakes between 1969 and 1977. “We’re hoping our results will trigger new site-specific seismic hazard analysis so that sites are safe for astronauts and infrastructure.”

Scientists have hypothesised for decades that the moon is shrinking due to the loss of its heat since it broke off as a chunk of the Earth starting life as a hot liquid ball, the breakup triggered by Earth's collision with another celestial object early in the solar system's history. This lunar contraction drives the emergence of tectonic thrust faults.

The NGRI study has now shown that the Moon has contracted for at least the past 100 million years, but the contraction rate in the lunar south pole region appears to have increased around 10 million years ago, giving rise to many of the faults there.