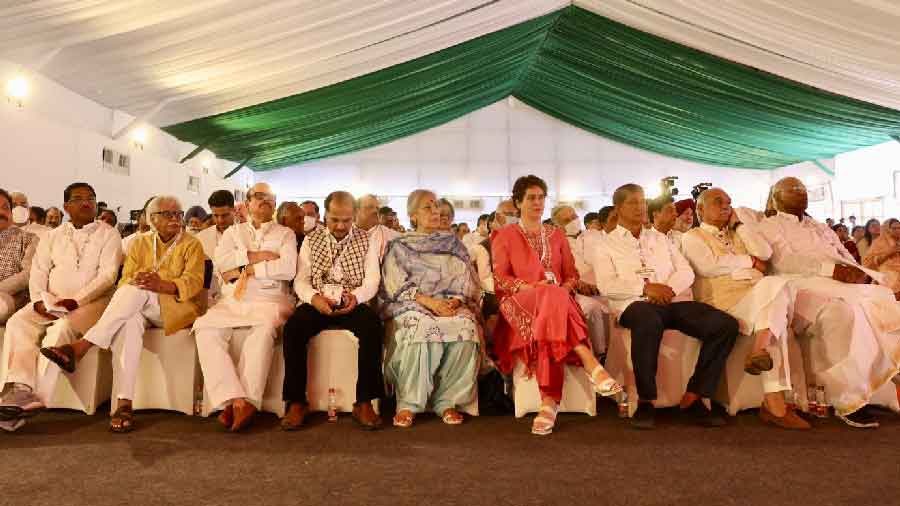 Congress top body has cleared the One-Family-One-Ticket with riders, rejected proposal for parliamentary board, reports ndtv.com.

Earlier, the Congress leadership on Sunday started the final round of deliberations to usher organisational reforms and articulate the party's position on key issues and challenges confronting it and the country at a meeting of the Congress Working Committee (CWC) here.

After the two-day long deliberations on organisational, political, economic, agricultural, social justice and youth related issues, the dedicated panels formed for the purpose submitted their reports to the Congress President which will be given to the CWC for their final approval.

Tricky issues relating to ideology, economic policy and social engineering have been debated in the Chintan Shivir panels and it remains to be seen what shape these issues take in the 'Nav Sankalp' resolution to be adopted later in the day.

The leaders have held several rounds of deliberations during the past two days in the six panels formed by the Congress president. Convener of these panels submitted their reports to Sonia Gandhi paving the way for a structured resolution.

The resolution will be adopted at the CWC and the Congress will adopt the 'Nav Sankalp' declaration be the outcome of the three-day brainstorming conclave where over 450 Congress leaders from across participated.

The party will adopt the 'Nav Sankalp' declaration after three days of brainstorming at the Chintan Shivir here.

The Congress is holding the three-day conclave in Udaipur in the backdrop of a string of electoral defeats and dissent in the party for the past many years.

The Shivir is focusing on time-bound party restructuring, finding ways to combat politics of polarisation and getting battle-ready for upcoming electoral challenges.

The Congress is expected to bring major structural reforms including the 'one family, one ticket' formula with exceptions based on high levels of performance in a party role for five years.

The formula will pave the way for leaders like Priyanka Gandhi and others to contest elections as they have worked in party positions since 2019.

The party is also likely to usher wide-ranging reforms and will unveil some big-ticket changes including providing 50 per cent representation to Scheduled Castes, Scheduled Tribes, OBCs and minorities at all levels in the party organisation as part of its social engineering efforts.

The party is also proposing to promise granting legal guarantee to MSP for farmers, besides granting 50 percent representation to those below 50 years of age and making unemployment a major issue in upcoming elections.